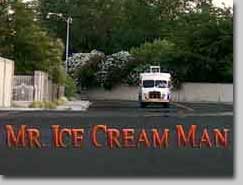 Overview: A homicidal ice cream man somewhat terrorizes a community. It's up to the most inept detective on Earth to stop him before he finds his children.

The Case For: There's a hilarious scene where this dumb kid trips and falls. It eventually ends.

The Case Against: The killer is laughably bad, which makes the fact that the cops can't catch him so aggravating that you will tear your skin off in strips. The kid doesn't die when he trips, allowing him to appear in later scenes. There are later scenes. 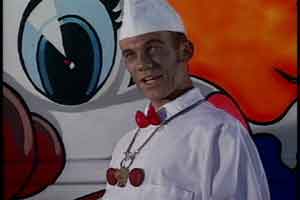 God, I hate that clown. And I'm not a fan of the one in the background, either.

Wherever the sun shines warmly upon the streets, he is there. Wherever children frolic in their specially designated frolicking groups, he waits nearby. Wherever a recreational sports activity is taking place, he will be found lurking in the parking lot. His chariot gleams white as bone. His haunting melody lingers long after he has passed. Those who feel his touch are chilled. He is the ice cream man. He is Mack Hail. Macky Mack (who also directed and co-wrote with fellow star Jim Mills) and his funky bunch of out-of-work porno actors have put together the worst piece of schlock ever made on the subject of psychopathic dairy product handlers.

It's hard to believe that anyone who was in any way associated with "Mr. Ice Cream Man" thought they were doing good work. I can't fathom how two grown men could write a script this bad and still be functional members of society. I am further vexed that Hail and Mills could then portray the characters that they wrote with such ineptitude. What's actually worse is that Mack Hail (oh, how I have come to despise that name) must have, at some point, sat down and watched the various takes during the filming of this mass of congealed pain and said, "Oh yeah. That's good. That's exactly how I envisioned it," unless he then said, "now I will sacrifice a virgin to Grongomet the Weaver-King and shove pubic hair in my eyes." I suppose the first red flag should have gone up when I realized that the DVD only had one chapter. The next warning was probably the menu screen, which listed special features that do not actually appear anywhere on the disc. How delightfully saucy. I can't even begin to scratch the surface of how criminally bad this movie is in an introductory paragraph. I have to share the agony of the plot with you all right now, or I will never sleep again. 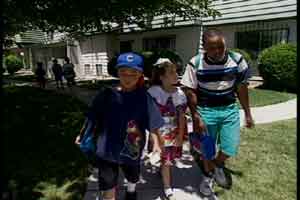 "We're off to see the wizard! The wonderful wizard of TERRIBLE MOVIES!"

I knew I was definitely in for a cinematic gem when I realized during the painfully slow title shot of an ice cream van gradually coming closer that the entire movie was shot on a crappy digital camera. I fully expected a little "battery low" sign to appear in the corner of the screen at any moment. It would have been greatly appreciated, as it would have hailed an approaching end to this catastrophe. The ice cream truck looms closer, closer, closer, and then a car starts to come out of a parking lot and nearly hits it. I doubt very much that this was intentional. It's sad to think that was the best take. Maybe in the other takes, the cameraman got mauled by a bear. That would explain some of the camerawork in the movie.

The title comes up, and the scene fades to a series of shots of the real focus of this movie - tender young children. I have never seen a movie with such overt overtones of child molestation. Just as the "Directed by Mack Hail" credit appears, the scene changes to one of the more brilliant examples of Mack's directing expertise. Emily, a little girl who is apparently clothed by the nineteenth century, is standing beside a tree in front of a row of houses. Other children walk by with their schoolbooks, while Emily grapples with the direction "stand there humming and laughing at nothing." Now that her character has been established, it's about time for another! The music turns sinister as Roland, a huge, pudgy, black kid with a Barney lunchbox, runs up to her. Roland is the finest child actor the world has ever known, as exhibited by his immense difficulty with the act of running. He moves like he's been shot repeatedly in each limb. Roland inquires about the whereabouts of Joey. When Emily tells him that Joey isn't there, Roland goes on an insane diatribe about how he's usually the one who is late instead of Joey, which I don't think was scripted. Most likely, Mack just told him to act upset, then let the camera run until Grongomet told him to stop.

Inside a bedroom, a small Hispanic boy and his mangled lump of dog sleep peacefully. We cut to a closeup of his alarm clock, which changes from 7:30 to 7:31, signaling the alarm to buzz. That's right, his alarm is set for 7:31. The boy bounds out of bed, proclaiming that he is going to be late. This must be Joey, that late kid Roland was so upset about! Damn you, Joey, for making Roland wait! He comes downstairs clothed, with his splotchy dog-beast at his heels. Just as he reaches for the doorknob, he is stopped by a his older sister, Sam, who has a badger glued to her scalp. In case the audience hasn't quite picked up on the point that Joey is late, Mack Hail provides us with the following dialogue: 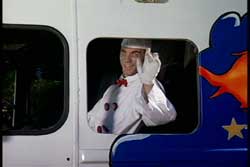 The face of evil.

Ah, now that's dialogue. Sam then gives Joey a Pop-Tart and send him on his way. Outside, Joey runs to catch up with Emily and Roland, who have just started walking. It is worth mentioning that they were waiting in front of Joey's house, and that Roland came running up from the left. That will be important later on. Roland makes fun of Joey for being late, and Joey admits that he was up late playing Super Nintendo. Oh, that Mack Hail, always with his finger on the pulse of the youth! I won't mention where else he touches the youth. Roland asks if he has "Street Fighter." When Joey says that he doesn't, Roland steals his Pop-Tart and starts shoving it in his fat maw.

Just then, what should come around the corner but an ice cream truck, driven by none other than the nefarious Mr. Ice Cream Man! With his oversized buttons, bright red bowtie, clean white suit, and comically large gloves, he's just a throwback to a kinder, gentler era... of evil! In an act of pure malevolence, he waves out the window. The fiend! All the kids going to school, swinging, climbing trees, and going down the slide go absolutely nuts at the prospect of ice cream, despite it being eight in the morning. Roland screams "ICE CREAM" at the top of his lung for approximately three days, then promptly trips on the curb and falls on his face in front of a car, smearing Pop-Tart all over his lard-stuffed face. All the mutant kids laugh at him, as well they should, because when dumb, fat kids fall down, it's comedy gold! Seriously, that one shot was by far the best part in the movie. However, being the best part in "Mr. Ice Cream Man" is like being the tallest midget in the world. Joey and Emily help Roland up and assure him that he can get ice cream after school. As they walk on, the camera pans by a flyer on a lamppost that says a child is missing. Let the frightfest begin. No, really, let it begin.