Bruce Lee Fights Back From The Grave 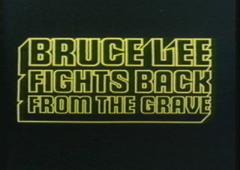 Overview: Bruce Lee (Well, Bruce Lea) cheats death only to get chewed out by a showering fat man and an angry police chief. So he embarks on a noble quest to fight members of a 70's boy band while ruining the life of a dumb, useless, smutty girl who for some reason is attracted to Bruce's rude and unappealing personality.

The Case Against: None of the fight scenes are particularly great, even by 70's bad Kung-Fu standards. The movie drags during the search of the magical "race course" and whenever Susan and Bruce talk at each other. Oh, and Bruce is an asshole. 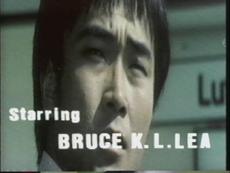 According to "Ain't I Fat News" (and a couple of other equally "reputable" movie buzz sites) a South Korean company is currently hard at work on a new martial arts action film. Now this normally wouldn't be much of a news story - since Asia pumps out bad martial arts movies like Hollywood vomits bland romantic comedies - but this particular project has a budget of $50 million, which is pretty huge by non-Hollywood standards. Oh yeah, and it stars Bruce Lee, who died nearly 30 years ago.

Their plan to resurrect Bruce Lee involves using a combination of computer graphics and voice alteration technology to create a new, digital Bruce Lee that would then somehow be seamlessly integrated with new live-action footage. This is a very expensive proposition and I for one expect the results to be less than convincing. You can't replace humans with polygons. But the most pathetic thing about this idea is that it's already been done before.

Bruce Lee died tragically and unexpectedly, leaving behind snippets of unfinished films and other miscellaneous unused material. So a couple of movie studios decided to cash in on Lee's highly publicized demise by editing these cut or unfinished scenes into "new" Bruce Lee movies. Other studios thought this was a great idea, but since there wasn't enough "lost" footage to go around, they opted for a decidedly more low-tech, but equally cheesy solution: they scoured the martial arts community for people who looked remotely like Bruce Lee, gave them a similar haircut, made them change their name, and… WHAMMO! New Bruce Lee! Most of these guys only had a vague resemblance to the original Bruce, but producers apparently thought that most filmgoers thought all Asian men looked exactly the same and wouldn't notice the difference. Some producers weren't even that ambitious: they merely re-titled old films which Bruce Lee had nothing to do with, slapped in some Bruce Lee-ish sound effects, and tried to sell it as a Bruce Lee film.

"Bruce Lee Fights Back From The Grave" is just one example of these miserable rip-offs. The title clearly implies that Bruce Lee or at least a zombie Bruce Lee is somehow involved, but this just isn't the case. You see, "Bruce Lee Fights Back From The Grave" stars Bruce K.L. Lea as Wong Han. At least I think that's what his character's name is supposed to be. Every time he says it, it sounds like "Want Ham." So I'll just call him Bruce. I guess I should mention that Bruce K.L. Lea doesn't look or fight anything like the real Bruce Lee did, but that's a given.

By the way, the company that distributed this film is called "Media." Media! That's like a construction firm being named "Wood" or "Construction" or "Build."

The movie begins with a shot of Bruce Lee's fake-looking tombstone. Oh no, he's dead, boo-hoo-hoo. But wait! It was all just a trick! Lightning strikes, "Bruce" jumps out of the ground with a squeal, and it quickly flashes over to this picture of Bruce Lee punching a Sam Jain-looking dragon. 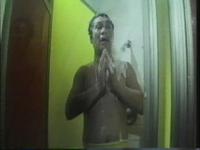 This filthy glob of pork turns out to be the smartest man in the movie. He tells Bruce that he’s a born loser and money can solve any problem. In this shot, he’s praying to God that his scenes are cut. He’s a genius!

Why did Bruce go through the whole hassle of dying and coming back to life? What duty compelled him to escape death's cold grasp? He had to go the airport. Well, at least that's what happens in the next scene. Bruce coolly walks out of the airport and gets in a taxi while the opening credits roll. The theme music sounds like drums being shaken from inside a canister of Tinkertoys. He goes to a martial arts school, fights a chubby Asian guy in a demonstration, and kinda loses. Then we get to see the chubby Asian guy naked, taking a shower. Bruce came back to life for this? While Bruce exercises in the locker room, Tubby babbles on and on about how he's "getting fed up to the teeth" with doing martial arts instruction because the pay is lousy. He tells Bruce that money is the answer to everything and that Bruce is foolish for abiding to some vague teachings. Bruce points to some discoloration on his stomach and says that the chubby guy is the foolish… guy. The chubby guys calls Bruce a loser and tells him he needs money. It really makes no sense. It's just your typical badly dubbed conversation that tries to foreshadow something clever but only serves to introduce Bruce's wooden, rude-sounding, bad voice acting. [Watch the end of Shower Man's inspirational speech (291K, Windows Media)]

Next, Bruce gets in another cab in possibly another city. The cabbie is a very 70's looking white guy with the white guy Afro and the silly "Welcome Back Knotter" mustache. Soon he stops the cab, holds a knife to Bruce's throat, and demands money. Bruce coughs up like a wuss and the cabbie orders him to get out of the cab. Once outside, the cabbie punches Bruce three times and leaves him laying on the ground. The cabbie drives off… oh wait, he pulls a sudden U-turn and tries to run Bruce over! Big mistake! Bruce gets up, sidesteps the now slow-moving taxi, and kicks through the driver's side window. The taxi grinds to a halt, and the cabbie stares at Bruce in total shock. What an impossibly impossible turn of events! This is a great scene. [The amazing car kick! (155K, Windows Media)]