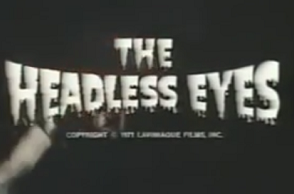 Overview: He's a woman-hating cycloptic psychopath who enjoys murdering people and scooping out their eyeballs with spoons for no apparent reason. She's a talentless stoner art student with geometrical blindness and the higher brain function of a St. Bernard who's had its head bonked off one too many car fenders in traffic. Can their zanily improbable, star-crossed, crazy-go-lucky love beat the odds? We'll never find out, but at least lots of really fake googly eyeballs will be gouged out with grapefruit spoons along the way.

The Case For: If you watch The Severed Arm before this, you can drink in the irony that the eye-gouging-themed '70s serial killer movie is much easier to see (this isn't actually a plus.)

Hydrogen: It's about time we got around to another 70s horror movie. I have fond memories of squinting really hard at The Severed Arm and trying to make out which shapeless blob was the one-armed serial killer, while bleeding out of both eardrums.

Trillaphon: Hell yes, this is the movie I've been waiting for. I cannot wait to see some savage eye-gouging in grisly, blistering 240p detail.

Hydrogen: Sure, if your idea of "savage" is a sleepy woman flailing around with a pudding spoon, and "grisly detail" mainly involves jump cuts and grade-C cow eyes.

Hydrogen: "Oh no, Frank, he's telling the story about the eye again. Can we just rent one of those bouncy castles next time instead?"

Hydrogen: Before we spoil the surprise twist ending for you, not only do the cops never catch this guy, they never even get a lead on him. Fuck, they never even really show up in the movie, come to think of it.

Trillaphon: Seriously, the guy owns the only fucking store anywhere, ever, that sells - exclusively, mind you - human eyeball-related merchandise...

Trillaphon: And during the sudden and bizarre rash of mass murders and freak eye-snatchings occurring in a suspiciously convenient radius around that one specific fucking store that curiously sells really realistic looking eyeball knick knacks, not one detective decides to pop in for a chat. 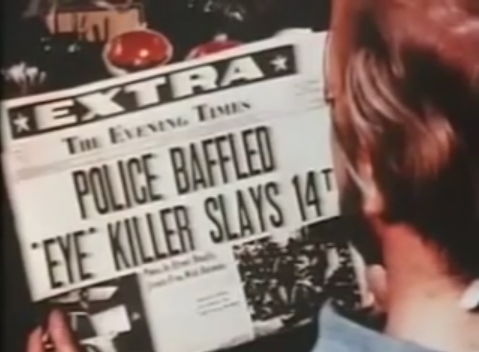 Eyeball-store owner swears: 'It wasn't me, honest!'Hydrogen: They were going to call this movie "The Tell-Tale Headless Eyes", but then the cops couldn't figure out to maybe stop by the eyeball-themed outsider art boutique right in the epicenter of the sudden rash of mass eyeball murders and maybe check out the merchandise or something.

Trillaphon: "Hey Sarge, you seen that new eyeball emporium off of 45th and Brompton? 'Enucleation Station,' I think it's called - yep, they've got all kinds of eyeballs in there. Guy who owns it seems kinda creepy though. Only got the one eye, too. Kinda...whaddya call it...uh...ironic, yeah, that's the word. Well anyway, I should probably get going here, still got no suspects in this eyeball killer case and the Captain's gonna have my nuts in a cider press."

Hydrogen: We're really not even exaggerating either; he literally has a storefront devoted to showcasing all of his murders in like the middle of Manhattan and nobody pops in to ask him a question or two about it.

Trillaphon: That might be even more brazen than the Severed Arm guys all getting together years later to talk loudly about the unholy crime against nature they committed just to make sure they all remember never to speak of it again.