Legend of the Titanic 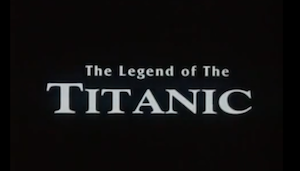 Overview: Onboard the Titanic, a menagerie of talking animals (including but not limited to racist Brazilian caricature soccer mice, hoverdolphins, and mafioso sharks in prisoner uniforms) compete with each other to be the biggest waste of time. Eventually the boat sinks because it's the fucking Titanic, only in this version nobody dies because they're all saved by magical talking whales and a giant beefcake octopus. Yep.

The Case For: "I wouldn't count on you if you were an abacus!" - easily the sickburn of the season.

The Case Against: This movie is anti-edutainment: it's still boring and terrible, but it will also un-teach your kids with lots of insane horseshit lessons, like "dolphins can fly if they flap really hard" and "love is good" and "anyone who claims to have relatives who died on the Titanic is a lying son of a bitch."

Hydrogen: Can this really be the first (fully) animated movie we've done? It seems like we've done so many, probably because we've proven time and again that we're not above taking on movies whose key demographics fall somewhere in the 6-12 year old range.

Trillaphon: Has anyone ever actually tried shooting fish in a barrel? It's probably cool and fun as hell, especially if you cheat and use dynamite. So to summarize, I don't see what's wrong with tearing apart dumb cartoons for children and then calling the children ugly and stupid for watching them.

Trillaphon: With that, let's all enjoy An American Tail 5: Fievel Goes to Hell I mean The Legend of the Titanic - a thrilling, romantic saga about how the Titanic was an inside job by mobbed up sharks, flying dolphins' tears and moonbeams can radically alter the architecture of the human brain, and you should never trust people with eye patches and cats named Lucifer who spend most of their time laughing maniacally at you from across the room.

Hydrogen: The Legend of the Titanic is of course not to be confused with the equally popular Titanic: The Legend Goes On..., which just so happens to be another Italian cartoon movie featuring talking animals on board the Titanic, only made about a year later and supposedly involving a rapping dog. So, you know, totally different.

Trillaphon: This version got our attention mainly because of its staggering 1.3/10 IMDB rating. Thanks for carrying on in the grand tradition of Troll 2, Italy!

Hydrogen: What is it with Italy and terrible, mind-destroying animated movies? It's like if Disney had a creepy Italian step-uncle nobody liked who kept touching everyone inappropriately at crowded parties because nobody ever called him on it.

Trillaphon: I just want to know how many bottles of grappa they had to swill to get through this shit. Just looking at the intro makes me feel like I need a liver transplant by proxy.

Hydrogen: No amount of alcohol poisoning can explain what this movie is or does.

Hydrogen: Christ, everybody in this movie sounds like they're being voiced by that guy who did the GI Joe PSA videos.

Trillaphon: The Count of Fonzie Cristo.

Trillaphon: Finally, a movie that combines all of the wild-eyed creepiness and shameless unoriginality of anime with the sleek, efficient hucksterism and revisionist horseshit of a Disney picture, for today’s fast-paced power-watcher on the go! Thanks, Italian company nobody’s ever heard of! I’ll never be able to shut my eyes without screaming again!

Trillaphon: I wonder which ones are the villains...is it the goodly Baron von Chinstrap and his generic useless Disney princess daughter, or could it be the stuck-up rich lady with the face sculpted out of pure fucking hate and the cat named Lucifer?

Hydrogen: I don't know how you can call the fair lady what's-her-face generic with a glorious mullet like that, not to mention the most animated cleavage you'll ever see outside of a Ralph Bakshi joint.

Trillaphon: If Ralph Bakshi came along halfway through and stuffed this movie full of cat nipples and Nazi wizard regalia, it still would've been both more entertaining and less detrimental to childrens' mental health.

Hydrogen: All I know is I'm rooting for Sir Winston Pettimoore Dubious and the Countess Sinestra of Evilton to succeed in their evil plan and get revenge on Johnny Quest, or blow up the Biodome or whatever it is they're up to.

Hydrogen: But really who cares as long as that one lady's Boobs Will Go On.