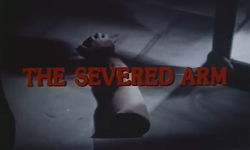 Overview: Five idiots stuck in a cave for a few hours lop off their friend's arm for food they don't need; five years later, a mysterious killer is seeking revenge by chopping their arms off right back. Yes, we're also disappointed that this movie isn't about an animated severed arm that kills people by choking them or high-fiving them with acid or whatever like a rejected Adams Family episode. Someone go make that movie so we can watch it instead.

The Case For: If you're writing a graduate thesis on early uses of terrible experimental electronic music in movies, this is your Dead Sea Scrolls.

The Case Against: The scariest thing in this movie are the cigarette burns implying it was ever shown in a real theater. 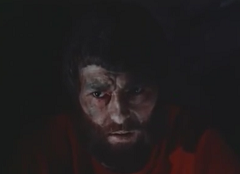 You also probably wouldn't expect The Severed Arm to be a blacksploitation movie, but it is - not the hip, ironic Tarantino-y kind with all the afros and porny soundtracks and hyperstylized jive-talking turtleneck kung fu, mind you, but the kind where nearly every scene in the movie is literally so dark that you cannot physically see it with your human eyeballs, and no amount of rods or cones or mail-in hypno-glasses will change that.

In fact, if there are any actors in the movie whose skin tone is even a micro-swatch or two darker than 'Benedict Cumberbatch butt-naked in a blizzard' or 'that ugly ginger kid with the rat from Harry Potter' then they must be totally invisible. Then again, since we can't rule out the possibility that the robust Severed Arm cast includes any number - perhaps even a majority - of people who run the swarthiness spectrum from Lenny Kravitz to Ricardo Montalban in blackface on a rotisserie spit, we really can't guarantee that it's not the other kind of blacksploitation movie too.

What we can guarantee is that your ears will be ringing from the musical score, which succeeds in drowning out all the boring dialogue in an utterly brain-liquefying synthesizer insanity fuckpocalypse. The mostly-electronic score was a bold experiment for 1973, but unfortunately it consisted mostly of fresh new sounds like "drunken cat tries to dance on xylophone", "swarm of bees condenser mic surprise", and "Bach's concerto for piano and ass in D minor". We kept expecting a giant "GAME OVER" screen to appear on the screen at any moment.

Either way, our riveting arm-severing bonanza begins with a bunch of sweaty morons briefly stumbling around some lost Sound of Music B-roll footage before making the classic horror-movie decision to go spelunking in a stupid random death cave for no reason:

So you can avoid the same gruesome fate, here are some helpful Severed Arm-inspired caving tips we've put together just for you:

1) Do not, under any circumstances, attempt to smash beams or other load-bearing structures that appear to be supporting the cave around you with pickaxes while saying "Hey, what's this?"

2) Make sure to tell at least one person somewhere, anywhere on earth outside of the group accompanying you into the cave, that you are going into a mysterious cave.

3) Never descend into a cave if it sounds like an alien garage band is practicing down there - aliens are very serious about their music and hate being interrupted while they are playing.

4) The human body is capable of surviving for long periods of time without food - AVOID floating the idea of cannibalizing your fellow cavers alive after only a few hours of being stranded - this is considered a major caving faux pas and will not end well for anyone.

5) KNOW YOUR TEAM: review proper caving etiquette and safety regulations with your fellow adventurers, and attempt to evaluate whether any of the other cavers are unusually enthusiastic about killing and eating one another with this helpful psychotic cannibal screening quiz:

Lord of the Flies is:
a) Some gay little poem for nerds.
b) A crappy Diablo III expansion no one will ever buy.
c) A helpful guidebook about how to survive on a desert island.
d) An allegorical dystopian novel about the innate savagery of man.

If you were going camping in the wilderness and might be gone a long time, what's the first thing you'd pack?
a) Basic rations/safety provisions, just in case.
b) Maps/a compass to help you find your way around.
c) An emergency phone/radio in case you need to call for help.
d) A gigantic knife for stabbing, gashing, and sawing through sinewy flesh/bone.

The first/most important thing to do if you become stranded in a cave is:
a) Don't panic - calmly review your basic survival training and assess the situation rationally.
b) Try to retrace your steps back to where you first entered the cave.
c) Compare & contrast the physiques of your teammates to determine which ones would be easiest to overpower and/or most filling if "converted" to rations.
d) Check your fellow cavers for injuries and apply first aid if necessary, taking extra special care not to accidentally sever or eat any parts of the wounded.

Remember, following proper safety procedures and guidelines might make your friends think you're lame and start doodling totally stupid and not funny pictures of you and your tiny penis getting eaten by a dragon behind your back, but they'll help you avoid SERIOUS, REAL LIFE TRAGEDY and having to make embarrassing excuses to your inconveniently-timed rescuers like "we had to use steak sauce, there wasn't any antiseptic" and "we tried to save the arm, but by the time we got to the ambulance there were too many bites missing".