A Review in Anger of The Devil's Dictionary by Ambrose Bierce 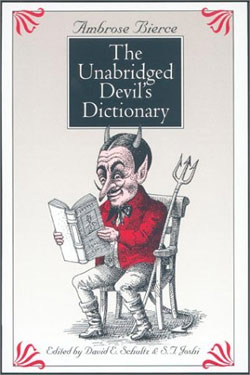 Writer and satirist Ambrose Bierce began including humorous definitions of common and uncommon words in his Town Crier newspaper column in 1881. These definitions formed the basis of his 1911 collection The Devil's Dictionary. It is regarded as one of the finest works of American satire and is considered by many to be on the same level as the works of Mark Twain.

Can you recall the paroxysms of laughter that contorted your body as you read Huckleberry Finn? Yes, The Devil's Dictionary is said to be that funny.

I recently made the mistake of purchasing a copy of The Devil's Dictionary to look smart and look like I cared about things, which I am not and do not. I was surprised to discover, after sitting with the book for a couple hours, that Ambrose Bierce is not funny. I cannot say for certain whether or not he was ever funny, but he definitely is not funny at present.

I knew I was in for trouble when I saw P.J. O'Rourke quoted on the back cover declaring the hilarity of Bierce's Magnum Opus. P.J. O'Rourke calling you funny is like having your hygiene complimented by Pig Pen as he lays dying from Hep-C. O'Rourke is, to put it another way, totally unequipped by nature to judge what is funny and what is not. If you've never read or heard or seen P.J. O'Rourke, he can be heard laughing uproariously at his own jokes as the audience murmurs uncomfortably on any of a variety of panel talk shows on American TV and radio. 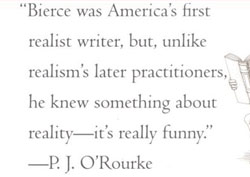 Some might argue that O'Rourke is funny, and that by extension my value judgment of Ambrose Bierce is incorrect. These people are contemptible scum worthy of nothing more than a short life of physically demanding unskilled labor that culminates in a fatal accident and their bodies being ground up and sold as dog food in China to feed dogs that are not even loved by their owners. Dogs in China are the only animals filled with adequate disdain for mankind. I feel assured that a Chinese dog would unclench its bowels and void out the last digested remains of these wretches with a suitable degree of hostility.

Returning to the subject of Ambrose Bierce, he is clever, I will give his fans that much. I will even admit that he is a skilled writer. He constructs admirable sentences and several of his short stories are excellent in that way that has since been spoiled for generations by M. Night Shyamalan. Alas, the years have not been kind to the mummy-dry humor contained in Bierce's satirical definitions. If you don't believe me, see if these two give you a real belly laugh:

FIDELITY, n. A virtue peculiar to those who are about to be betrayed.

MAYONNAISE, n. One of the sauces which serve the French in place of a state religion. 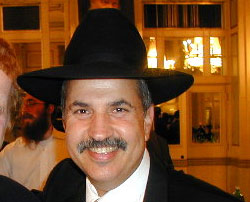 Granted, it's funnier than Dennis Miller, but guys like Dennis Miller and P.J. O'Rourke get called funny by people who enjoy reading Heritage Foundation whitepapers on intervention in Iran. That's not exactly a lofty height to which a humorist should aspire to ascend. Did you know that P.J. O'Rourke won a Pulitzer Prize as a political satirist? It's true! Thomas Friedman has three of them and he may be the dumbest person still able to operate a computer.

You might as well hand out Pullitzers to the menu at the Waffle House. Although, that explains why Pulitzers go for so much less than Daytime Emmys on eBay.

Returning, belatedly again, to the subject of Bierce, he salts the hilarity earth of his masterwork by shoehorning in comedic poetry wherever possible. Nothing prompts gales of unrestrained teary-eyed laughter quite as well as comedic poetry written under a jokey pseudonym. Here's an example taken from Bierce's definition of the word "Bath":

The man who taketh a steam bath
He loseth all the skin he hath,
And, for he's boiled a brilliant red,
Thinketh to cleanliness he's wed,
Forgetting that his lungs he's soiling
With dirty vapors of the boiling.

Willickers! I certainly hope he regales us with the legend of R.T. Farty and the musical fruit of beans!

I do not claim that Bierce is deserving of inconsiderate scorn. On the contrary, I would argue that my scorn is very well-considered.

His wit is quite apparent throughout the work, as I touched on earlier; it simply exists outside the fickle realm of contemporary sensibility. It is the transient nature of both humor and language that have rendered The Devil's Dictionary obsolete, not any specific failing of Bierce. It is not an uncommon occurrence.

I have no doubt, for example, that sub-literate cavemen of 20,000 BC would find primitive delight in the hundreds of tiny black snakes that to them constitute one of Thomas Friedman's columns about Iraq. Similarly, what might a giant Cambrian insect do with a copy of The Atlantic featuring an essay by P.J. O'Rourke in which he muses that he saw a woman by a Fig Newton with food stamps? One can only surmise that it would involve vomited digestive juices, dissolving advertisements for the Complete John Updike Collection, and a very satisfied giant insect.

Throughout the years, a number of men and women have sought to recapture Bierce's humor by recreating The Devil's Dictionary, either by remaking it whole or from the perspective of a specific subject. John Wortheimer's The Cat Phrenologist's Dictionary was a huge hit during the cat phrenology craze of the 1930s and Louise E. Farrow's Cat Phrenology A-to-Z successfully capitalized on the nostalgia market for cat phrenology in the late 1950s. Both works are forgotten, as are most other attempts to recreate The Devil's Dictionary, with the possible exception of Al Franken's 2003 book Shrubisms: How the Apemmander and Chimp Talks Down to Us. 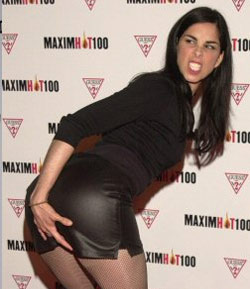 I ask you, gentle reader, why fight the short-lived nature of humor? It is a futile gesture akin to Wounded Knee or that time Norman Smiley wrestled Hulk Hogan. History has recorded our defeat before the battle has even begun.

Embrace the now! Accept the fleeting existence of your humor and apply it to the most temporal subject matter. Write your own Devil's Dictionary covering Internet slang or cynically deconstructing business jargon. Include a lot of pussy jokes. A lot of them. Sarah Silverman has made those way hot and you need to snatch that trend with both dewclaws and ride it to the finish.

Having fully rendered my opinions of Bierce and his masterpiece, I offer you one last morsel of review for this book. These two sentences are excerpted from a very positive review written by Gaelen Hudson for Amazon.com. I will allow you to draw your own conclusions about their significance here.

I'll admit it, I'm a tech dork. I work for an Internet company and this book is perfect for tag and signature lines for email.

The Devil's Dictionary is available for free online.