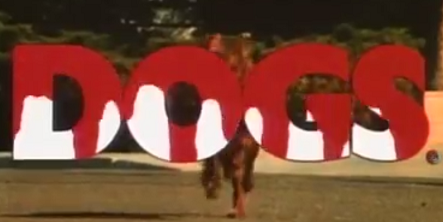 Overview: Remember The Birds? This is that, but with dogs. Wait, no, that movie would be awesome. Nevermind. This is more like Punk'd, except instead of meeting Ashton Kutcher you just get punked to death. By dogs.

The Case For: Has dogs.

The Case Against: Not enough dogs.

We know some of you out there are thinking of actually trying to watch Dogs. "I like cheesy horror movies, and I like dogs, how bad could it be?" Before you risk early-onset dementia finding out just how bad the answer to that question is, why not try our own truncated (and very much improved) version, Dogs in a nutshell?

You'll be relieved to know that the heavily-implied sequel Cats (in which stray cats might kill people by, say, tripping them or bringing them diseased dead mice possibly) was never made, either because Dogs was so worthless and stupid on every level, and/or due to any number of singing death threat-o-grams from Andrew Lloyd Webber. We're probably the first two people to have ever even noticed that ending, because it requires godlike patience and strength of will (or being shackled to a TV set in Lowtax's basement) to actually make it through this whole thing.

How is this even possible, you might well ask? How can you gather up a platoonful of dogs and put them in front of cameras, and end up with a movie this astronomically boring? The eight millionth YouTube hit for "funy dog i laugh" probably had more viewers in 20 minutes than Dogs will ever have. And for good reason, because any random person filming their dog eating garbage and running in circles on Vine has instantly made a more entertaining (and probably much scarier) video than Dogs. It takes a special brand of anti-talent to pull off something like this.

Part of the problem comes from the fact that it's never really clear why dogs are suddenly running around as a giant army and indiscriminately slaughtering people. There are lots of great reasons we could think of to hypothetically raise an evil dog army. Maybe the horn of Dog'Nor was sounded, and a great dane with a long beard gave a really moving speech about overthrowing the evil human oppressors. "Where is the pig in the blanket? Where is the ball that was rolling? They have passed like cats into traffic, like cheese into the garbage." Or maybe they've eaten one Beggin' Strip too many. They said they can't tell it's not bacon, but one dog knew. He knew it wasn't fucking bacon, and he dreamed of glorious revenge.

R.I.P. Chompers, he died doing what he loved (murder).Sadly, nobody attached to Dogs was creative and handsome enough to think up any of those million-dollar ideas, so instead the explanation is that the dogs reached "critical mass" and went crazy because something something pheromones. Finally, a scientific explanation for why the Westminster Dog Show always ends up as a big pile of dead bodies and roving cannibalistic toy poodles. We guess that's the sort of top-shelf scientific inquiry we can expect from Dr. Buster Bluth, director of the autism department at glorious Southwestern Dog Auschwitz University, and his sidekick Professor Hipster Doofus Wolverine. Of course, they did take a solid 30 minutes to figure out that dogs were the ones responsible for the townspeople mysteriously dying of 'a bunch of dog bites,' so the bar is maybe a little low.

Dogs really, really badly wants to set itself apart from all of those other animal attack movies by using real Science", but unfortunately nobody actually cracked open a science book at any point. So even though it's a little late, here's a list of helpful movie-making science facts that everyone involved in this production needs to study closely:

1. Unlike Tyrannosaurus Rex, dogs can still see you if you stand still.

2. "Dog bites are caused by dogs" is not a shocking twist reveal, especially if your movie is fucking called Dogs.

3. Leaving the back door open to air the place out while you take a shower is not a rational decision that a real person might make after she goes home to hide from the roving packs of murder dogs.

4. If you're going to make a cookie-cutter "nature takes its horrible revenge on man" murderous-animal movie, you should probably have somebody commit an unforgivable environmental sin slightly worse than "bringing too many dogs to the park at once."