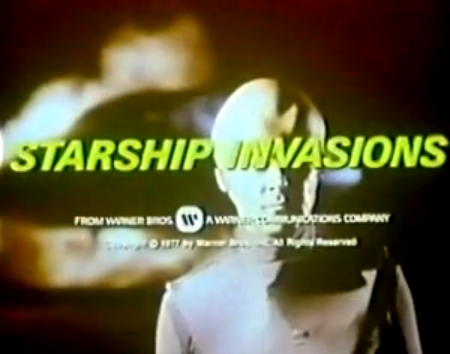 Overview: An evil but very inefficient alien race tries to conquer Earth by mind-controlling one person at a time and making them commit suicide while shopping for avocados. Humanity's only hope of salvation lies with the intergalactic U.N., the worst robot ever built, and some drunk guy with a novelty pocket calculator.

The Case For: A sci-fi movie released the same year as Star Wars, with a million-dollar budget and starring Christopher Lee as the antagonist? How bad could it be?

The Case Against: Star Wars used up all of the special effects, Christopher Lee doesn't get to move his mouth at any point during the film, and we're pretty sure the million dollars mostly went toward the staggering quantities of meth Ed Hunt et al must have consumed to make this movie. 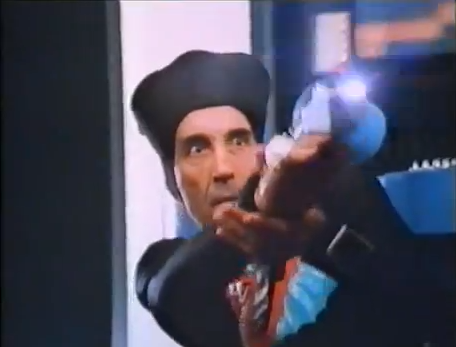 Imagine a robot cobbled together from irregular trashcans, crazy glue, and some sort of diabolical fanny pack/girdle hybrid. Now imagine this hideously misshapen heap of sparkly latex lurching awkwardly up behind a spandex-clad Christopher Lee, oiling up his state-of-the-art robo-mittens, and proceeding to give the once-proud Man With the Golden Gun the filthiest, shiniest mechanical back rub your feeble organic brain can conjure for a solid 90 minutes or so. Now splice in some occasional footage from the 1979 Space Invaders World Championships and a disturbingly graphic documentary on cerebral gigantism, and finish it off by peppering in a couple shots of nudity so jarring and unnecessary even Rip Torn would find them tasteless. The movie you've just imagined is far better than Starship Invasions in just about every conceivable way, but it still manages to set the appropriate mood. Wait, is suicide a mood?

Starship Invasions (alternate title: Project Genocide) is the gross, throbbing brainchild of writer/director Ed Hunt, who went on to bring us the hard-hitting documentary Flying Saucers are Real!, a film whose otherwise untouchable credibility probably would've taken a slight hit if it tried to use any of the flying saucer effects from Starship Invasions. Not to say that the special effects here are marring an otherwise perfect science-fiction experience. An incredibly simplistic "aliens want to kill all humans because they're dicks" story is somehow strung together from a series of increasingly baffling and arcane plot points. On top of that, most of the so-called acting is of the staring-wordlessly-into-the-camera variety, case in point:

Meanwhile, the costume and set decisions range from tragically stupid to hilariously tragic to nearly Zardoz-ian levels of mind-melting psychedelic insanity, the end result of which is roughly equivalent to physically experiencing the final scene of 2001: A Space Odyssey, except instead of transcending space-time and evolution you just kind of quietly die inside and curl up in a fetal position on the floor next to your dog. 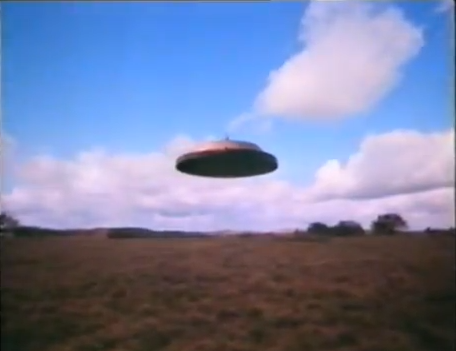 I WANT TO RING FOR SERVICEThe plot, such as it is, opens with a flying saucer (which looks suspiciously like it was pried off the front desk of the production team's Motel 6) wandering the countryside and abducting people, including a hick who makes Randy Quaid look like a slick Manhattanite, and a family who treats the alien spaceship like a bum with a filth-encrusted wash bucket, locking the car doors and avoiding eye contact until it goes away.

The aliens, who for some reason are all decked out in the alternate uniforms rejected by the St. Louis Blues, forgo the traditional anal probing and instead subject their captives to some steamy softcore action for no apparent reason. Seems like a pretty good deal as far as abductions go, at least right up until the kidnappees start offing themselves like Scandinavians*. The movie didn't feel like telling us anything about why any of this might be happening, and it might be our fault for watching it while it was in one of its 'moods,' but either way our best guess is that once you've had zero-G alien sex, there's just no going back to missionary so you might as well just eat a bullet.

*We'd like to take a moment to apologize to any Scandinavian readers out there we might have offended. We are sincerely and deeply sorry that you live in a part of the world so crappy and lame that even the sun won't go there. We wish you the best of luck with your ongoing struggle for survival against the elements, trolls, and endless maddening wastelands surrounding you on all sides, and earnestly pray that you will one day escape the cruel yoke of climate distribution under which God has seen fit to enslave you forever and ever. If you have any comments, please feel free to scribble them on some fish heads with the fermented urine and sheep snot your people use for ink (and also bathe in) and send them by vengeful raven to: trillaphon@somethingawful.com.