The World's Most Dangerous Band

My name is Hamlet Parasite, and my band, The Exploding Crates, has been called the most dangerous band on earth. That title mainly refers to the danger of being in my band, which has lost several members due to drug overdoses, time-travel mishaps or because they were eaten by our drummer, Quark. I'd fire Quark, but he's twelve feet tall, writes most of our songs, and serves as our moral compass for all decisions that don't involve eating people.

I'm in a nightclub bathroom, examining myself in a cracked mirror. (I'm always self-conscious about how I look in broken or dirty mirrors.) Suddenly I notice a man behind me. He's wearing a paisley shirt and his skin is pale and transparent. He's either a ghost or the Jimi Hendrix hologram that's opening for us.

"I'm a ghost," he says, and asks if he can take a selfie with me on his Druid (a phone-shaped hole into the world of nightmares).

"You look familiar," I say as we pose together. "Are you one of the people Quark ate at our last gig?"

"No, I was the singer in a band, The Flaming Trash Barrels. We were playing here and I died of a heart attack during our signature song, 'If I Have a Heart Attack During This Song, Don't Resuscitate Me or Call 911. Just Sip Your Drink and Enjoy the Rest of Your Friday Night, Your Only Respite from the Pain-Dance of Your Work Week.' Now I'm trapped in this club forever. If I step outside, I end up in this horrible wasteland like in Beetlejuice."

We both laugh, though his laugh sounds kind of forced. In his wasteland, there are probably actual monsters with multiple rows of teeth that whirl around in their mouths like band saw blades.

I feel bad for making the joke, especially since I empathize with him. I too feel like I've been trapped in this club (or ones like it) forever. It wasn't always like this. I used to live for the thrill of gigs and the leonine roar of the crowd. My favorite memory is playing Pom-Aid - Neil Young's benefit concert for the pomade shortage he singlehandedly caused during his '80s rockabilly phase. After our set, our bassist, Mote, and I were snorting the bone dust of Mick Jagger off a mirror while Quark devoured our manager, and for a moment I actually saw the mirror - not the bone dust and viscera reflected in it, but the mirror itself.

At the sound check, Mote, who has cirrhosis, tunes his Fender bass and plugs in his portable infusion pump, which he's nicknamed Led Zeppelin IV. The pump is also made by Fender - to capitalize on the large number of substance-damaged rock stars, most guitar manufacturers also make medical equipment. Quark hands me the setlist, at the end of which are a few Sonic Youth covers.

"There's no apostrophe in 'Kill Yr Idols,'" I say irritably.

"That's it," I say, throwing down my guitar. "I can't work with people who don't know the difference between 'yr' and 'y're.' I quit!"

I storm out of the club, leaving Quark and Mote to reform as a drum and bass duo. It's night, and the city skyline looks like the waveform of some overplayed song. 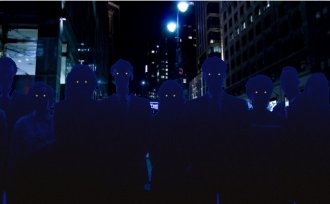 A mob of fans stands between me and the street.

Their eyes are a sea of lighters, burning with hatred. "Your can't leave us," they say. "We own you."

"You may own my music, due to file sharing and its erosion of copyright," I say. "But you don't own me."

"Yes we do," they say. "You're our fantasy, our collective dream of fame and fortune we'll never achieve. You only exist for our vicarious pleasure, and if you ever forget that, if you ever try to have thoughts and feelings of your own, we'll destroy you as quickly as we created you."

"Out of my way," I say. I try to muscle past them, but a sudden pain stops me. It feels like a million tiny hands tearing at my body, shredding it like Yngwie Malmsteen on guitar. I clutch my chest, which is shot through with blue beams of light from the crowd's eyes. I stagger backwards and raise my hands in surrender.

"Okay, I'll play your show," I say. "But can I at least play some new songs from my shelved solo project? It's video-game-themed techno. I've got this great dance track called 'Running up That Green Hill (a Deal with Tails).'"

The crowd confers for a moment. "We'd be okay with that," they say. "As long as you stagger the new material throughout the set, and open with a suite of your classic hits."

I return to the club and play the gig. The new songs get the biggest applause we've ever heard. The Exploding Crates' venture into chiptunes has begun.