In Search of the Titanic 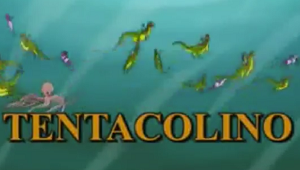 Overview: Three years after the Titanic tragically sank with no casualties because everyone was saved by a fleet of magical talking whales, some of the survivors (including a talking dog, two talking rats, and a non-talking woman) go in search of the wreck. Instead, they end up in the Kingdom of Atlantis, where they're treated to a menagerie of wonders and whimsical adventures! Adventures such as:

And nope, we haven't finally had a tandem psychotic meltdown, that's a real plot summary.

The Case For: If you've accidentally ingested a massive dose of DXM and come almost completely detached from reality, this movie will make you feel relatively grounded.

The Case Against: Unlike its predecessor, Legend of the Titanic, this movie doesn't even pretend to have the slightest shred of actual Titanic history to help ground its storyline. And given that the "historical grounding" we're talking about involved a giant muscle octopus with Mickey Mouse eyes accidentally sinking the ship by playing catch with a gang of mafia sharks, you should be very worried about what you're about to witness.

Trillaphon: Fresh from the briny depths of cinema, Tentacolino a.k.a. In Search of The Titanic is a reeking chumload of multinational psychedelic animated insanity hearty enough to send even the saltiest of awful movie adventurers screaming back to their lumpy fishwives.

Hydrogen: If that sentence doesn't make you need to watch this out of sheer morbid curiosity, I don't even know what will. Well, except maybe this:

Trillaphon: In Search of the Titanic has it all - well, except the actual Titanic, that is. Because that's only in the movie for like 12 seconds. The rest of it's actually about some eelshit crazy plot involving a bunch of commie rats trying to overthrow the omnipotent god-emperor of Atlantis by stealing his magic sippy cup of immortality.

Hydrogen: To be fair it's a hell of a 12 seconds, but let's not spoil the fun by explaining the details of that just yet.

Trillaphon: I strongly object to using the word "fun", or assuming we'll ever be able to explain anything even tangentially related to this fucking movie.