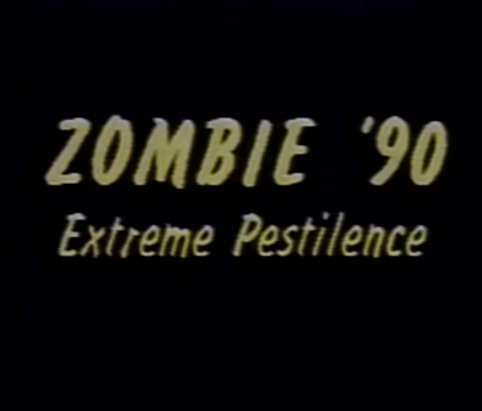 Overview: A military plane carrying every zombie macguffin known to man crashes into Germany, prompting some guys dressed like doctors to investigate. That's all we could figure out past the nonsensical dubbing and assorted nauseating sound effects.

The Case For: If you're one of those people up on a high horse about how World War Z isn't faithful enough to the source material, just gaze upon this movie and you'll know how much worse it could have been.

The Case Against: Any and every scene in the whole movie. 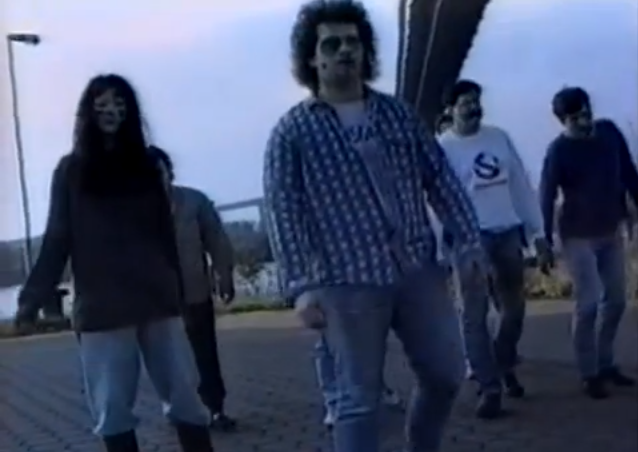 Zombie '90 might be the worst thing to come out of Germany since 1945. But unfortunately, we can't blame this one entirely on the Huns. Although the movie itself was shot and acted out entirely in German, it then seems to have been re-dubbed in English by a cackling madman who sounds to us like 400 pounds of midwestern trailer-park meat, most likely sporting some power combo of beard, mullet, and overgrown moustache (pick any two.)

Not only did our resident mad mic-man never have any idea what the plot of this movie was supposed to be/what any of the characters are saying, he's also added quite a bit of his own personal special comedy flavor by intentionally making the dubbing as bad as possible, in the name of, uh...well, I guess we'll never know.

So Zombie '90 is that most egregious brand of cinematic offense, an intentionally bad bad movie...except that it's not, since the video part is just your standard awful zombie movie fare, i.e. nonstop blood-drenched gore-porn, with enough rubbery pig guts to feed an entire army of pregnant Rottweilers and still have plenty left over for decades worth of fraternity hazings and school cafeteria mystery meatloaf. It's a chimera, a monstrous hybrid, a bizarre mixture of different kinds of seemingly irreconcilable failure; a gross, malnourished cinematic flipper baby that never should have been brought into existence, but now that it's here, you just can't look away. 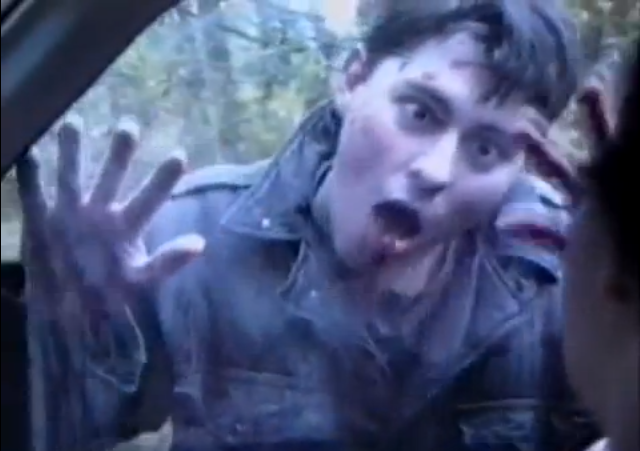 Zombie '90 is the loving labor of Andreas "Spetz" Schnaas, a man who first set out with nothing but a shitty camcorder and a really stupid dream to earn the dubious honor of releasing the first direct-to-video horror movie in German history. That movie had a $2,000 budget, and from the look of the gore effects here we're betting he blew most of that on tubas and schnitzels and David Hasselhoff CDs, or whatever Germans spend their money on. Like, we're talking super-soakers full of cherry Kool-Aid and butcher shop dumpster diving here.

The really impressive part is that he somehow still managed to use the $16.37 left to convince a couple dozen people to put on hideous makeup and stumble around harfing down raw pig ass while grumbling to themselves and chucking buckets of fake blood at each other. Oh, and ripping plastic babies in half of course:

Wait, this is Germany we're talking about, people were probably lining up around the block to do all that stuff for free.

Anyway, even before we come to the dialogue, it's painfully obvious that there's nothing resembling a story being told here, just literal buckets of "blood" being thrown all over the place like titties in Westeros. We've seen cell phone videos of the backs of people's heads in a riot that are better composed than this movie. The vast majority of the scenes are just random people being ripped to shreds by zombies in increasingly goofy ways, and occasionally vice-versa.

As for the remainder, scenes like a doctor pulling out his medical Luger to do a little experimental brain surgery, and what we're really, really hoping is the longest guy-pissing-in-a-forest segment in movie history (please feel free not to correct us if we're wrong) probably aren't part of a thought-provoking philosophical treatise that really comes across better in the original German.

There are occasional moments of mild amusement in the zombie scenes, but these tend to be more of the "what the fuck were they smoking and/or eating" variety, like the random group of people wandering around an open field who don't notice the local zombie mob sashaying toward them until they're within brain-gnoshing range. Then there's the unsporting dickhead of a zombie who can't take a challenge, so he just punches in IDDQD at the beginning of the pestilence or apocalypse or whatever the fuck and goes right for the chainsaw in the corner: