My Bloody Valentine's New Album Is Full Of Surprises

The new album from My Bloody Valentine is a surprise in itself. Some twenty two years had gone by since the release of their previous effort, Loveless. In that time the band parted ways, got back together, used a concert tour as an excuse to wage war on tens of thousands of human eardrums, and hinted at the possibility of recording something new. For years, nothing came of this. Even when information about the band's upcoming album became increasingly specific most people wrote the idea off. Then, last week m b v just sort of… appeared.

As surprising as the existence of m b v itself may be, many of the creative decisions that went into the album are every bit as unexpected. I don’t profess to know a whole lot about My Bloody Valentine, but even I was caught off guard on my first listen. 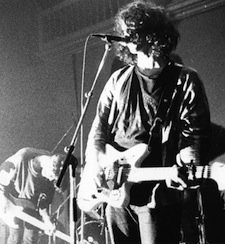 For starters, you might notice that the first song is completely silent. Is this a production error? Or perhaps it's some sort of bizarre statement about living up to the impossible expectations of an audience that has been waiting for new material for more than two decades? No. As it turns out, the song is simply not audible until you crank the volume up to 120 decibels. That’s as loud as a thunder clap, or a human screaming in panic when they hear something at 120 decibels.

Some of the songs seem to have… how do I put this delicately? They seem to be geared toward a wider audience. I’m not saying that My Bloody Valentine has turned into a pop music machine. Not at all. There's nothing inherently wrong with broadening your fanbase or dropping experimental elements of your music to focus on hooks. I’m just not sure that anyone expected an Adam Levine duet on this album. Much less seven of them.

You probably think that 22 years is an insane gap between albums. The thing is, every single song on m b v was recorded and ready to go back in 1993. Ever the perfectionist, Kevin Shields demanded extra time to work on the ending of the very last song. It had to be just right, leaving the listener pleased and wanting more. For the last 20 years My Bloody Valentine have worked on these last ten seconds of the very last song. The result? A gradual fade out, followed by the stock Hollywood sound effects of a door slamming and a cat meowing in surprise.

Also a surprise? The lyrics. They are remarkably different from the band's earlier work:

The Standard Edition of m b v has - for the first time in an album that I’m aware of - embedded commentary tracks. Commentary Track 1 features the band's thoughts. Commentary Track 2 has the producers chiming in with interesting tidbits about the making of the album. In Commentary Track 3 Rob Schneider continually remarks that it was an absolute pleasure to work on m b v. In a curious move, all three tracks play at once, overlapping one another at twice the volume of the music itself. Even more surprising, they cannot be disabled.

The same bass line is repeated throughout the entire album. It’s the Pink Panther Theme. Between tracks 8 and 9, there is a first for a My Bloody Valentine album: A skit. This odd interlude does not feature anyone from the band, but is in fact an audio rip of a scene from Movie 43 in which Chloe Grace Moretz gets her first period and it’s funny because there’s gross blood and her boyfriend doesn’t understand menstruation. The skit ends with each member of the band imploring listeners to rush out to their local cinemas and watch the film.

When you buy the album digitally, you aren’t technically buying the album itself. If you read the fine print, you will note that m b v is a gift. Your money is actually going to the Kickstarter fund for My Bloody Valentine’s next album, due in 2034.

Isolate the first letter from each word in a song’s title. Do this for every song on the album. Note that if you simply write these letters in the order they appear, you get a message: “Ron Paul Was Right About Qwikster”. If you rearrange these same letters, you get a remarkably different, but no less significant message: “Hetero Butt Documentary”. If you write the same letters in the reverse of their originally occurring order, you get: “666 Devil Satan Goat Druid Dungeons And Dragons”.

My pick for the biggest surprise? Look under your seat. You get a free copy.