On August 9, 2014, police officer Darren Wilson shot an unarmed teenager, Michael Brown, to death in Ferguson, Missouri. What follows are the medical examiner's notes about Wilson's injuries after his encounter with Brown. Feel free to use this web page as a citation for the many arguments you will inevitably have with family members over this Thanksgiving holiday. 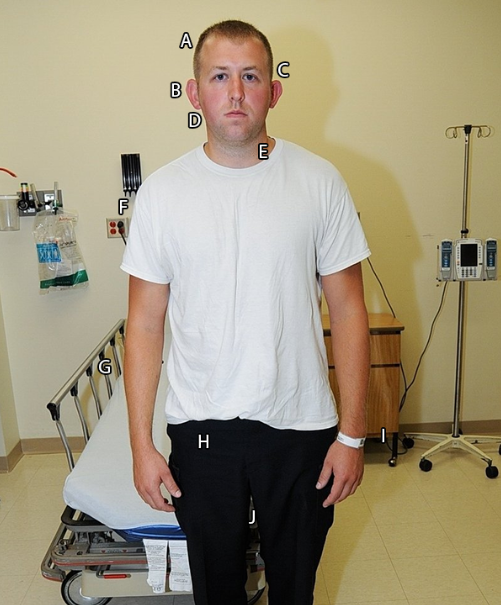 A. Asymmetrical fifth-grader haircut: Mr. Wilson claims his peanut-like skull shape is the result of a punch "with the power of all the X-Men, even the lame ones," but prior x-rays reveal this as a pre-existing condition. Recommended a one-year subscription to GQ and distributed a pamphlet about basic comb usage.

B. Protruding ears: Again, Mr. Wilson blames another deformity on a brutal assault by Michael Brown, but trauma experts assured me these are not the product of "a super-move right out of Dragon Ball Z."

C. Adjacent eye syndrome: Fully unrelated to any cases of physical violence. Medical science recommends that, should Mr. Wilson breed, he would do best to seek a mate several branches removed from his family tree.

D. Sunken Jaw, AKA "The Droops:" From various scrapings, it appears Mr. Wilson's lower mandible maintains its shape with roughly 18 ounces of powdered tobacco, or "dip" stuffed within his bottom lip. Despite his insistence that this condition stemmed from a violent altercation, he nonetheless scoured my office for "shit that would make a good spitter."

E. Sink-Chin or "Nacho Fever:" Though Mr. Wilson would have us believe this element of his misshapen skull resulted from a powerful haymaker "with the power of six Hulk Hogans times four Macho Men," it appears a consistent intake of 7-11's "Doritos Loaded" fully explains this condition. Recommended a diet with more nutritional value, like lawn compost or Soylent.

F. General slumpiness: The possibility of a lengthy, justice-ridden trial has caused a measurable effect to Mr. Wilson's posture. Gave him a voucher good for a free Kindle download of the book He's Dead and You're Not: Making the Most out of Involuntary Manslaughter.

G. Rumbly Tum-Tum: Please see the above note about "Doritos Loaded." Recommended Mr. Wilson drink ginger ale, eat crackers, and watch cartoons in bed. Unsurprised to see these plans had already been in place prior to the Michael Brown incident.

H. Goddamn, dude: You just going to stand there with that half-tuck? Mr. I-Empty-My-Gun-Into-A-Teenager can't even get his Hanes beefy T under control?

I. Swollen wrist joint: Wilson claims this injury as the result of Brown's jump-kick "right out of that Crouching Dragon thing," but several sessions of hypno-therapy have revealed it to be the work of someone named "Skyrim." Messaged the FBI to check their databases for any juvenile offenders by this name.

J. Dick: Not present at this juncture. Waiting to hear back from the electron microscope lab for definitive proof of its existence.