r/Childfree is a place where bitter childfree (which is not the same thing as being childless, thank you very much) Reddit users can complain about all the baby pictures they're forced to look at on Facebook and unruly moppets they come across in real life. You can get a feel for these folks by looking at their flair, Reddit's version of obnoxious bumper stickers: 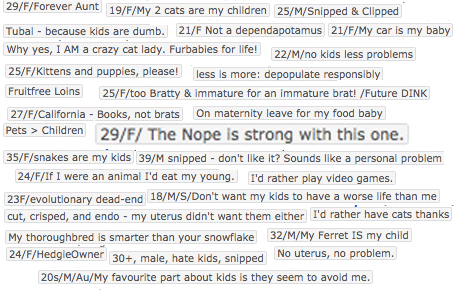 The natural enemies of the childfree are "Mombies," "Daddicts," and their wretched crotchspawn, which you can refer to as "snowflakes," "sneauxflakes," "sneauhxflayhkes,"or "sneåuxflæïyckes," depending on how irritating you want to be. The community's not terribly fond of children, to put it lightly - the moderators had to tell people that if they wanted to post screenshots of kids from The Sims being violently maimed, they'd have to go elsewhere.

Members often brag about the benefits of living childfree, like having more money, getting to travel, going out at night, and not being murdered by your own offspring. Sounds fantastic, right? Yet apparently they're also one of the most ostracized groups in modern society, on par with atheists (!):

The thought came to my mind the other day when I was telling my boyfriend that I think being childfree by choice is the new atheism. As in, you're an outcast of society and people think there's something horribly wrong with you. You're constantly berated with personal, intrusive questions, and people can not genuinely understand how someone doesn't want kids (or not believe in a higher power).

The persecution they face manifests itself in various ways, including:

In the face of such marginalization, it's important to stay strong and keep shooting down bingos. Remember, you can never be too young, too virginal or too single to commit to a childfree future!

Thanks to Lord Beef for the above screenshot and for the phrase "Redditors not reproducing"!