A troop of monkeys is giving Kenyan villagers long days and sleepless nights, destroying crops and causing a food crisis. They estimate there are close to 300 monkeys invading the farms at dawn. "When we come to chase the monkeys away, we are dressed in trousers and hats, so that we look like men," resident Lucy Njeri told the BBC News website.


"But the monkeys can tell the difference and they don't run away from us and point at our breasts. They just ignore us and continue to steal the crops." In addition to stealing their crops, the monkeys also make sexually explicit gestures at the women, they claim. "The monkeys grab their breasts, and gesture at us while pointing at their private parts. We are afraid that they will sexually harass us," said Mrs Njeri.

The residents say the monkeys have killed livestock and guard dogs, which has also left the villagers living in fear, especially for the safety of their babies and children. The villagers' attempts to control the monkeys have failed - the monkeys evade traps, have lookouts to warn the others of impending attacks and snub poisoned food put out by the residents.

Some residents have lost hope and abandoned their homes and farms, but those who have stayed behind, like 80-year-old James Ndungu, are making a desperate plea for assistance. "For God's sake, the government should take pity on us and move these monkeys away because we do not want to abandon our farms," he said. "I beg you, please come and take these animals away from here so that we can farm in peace." 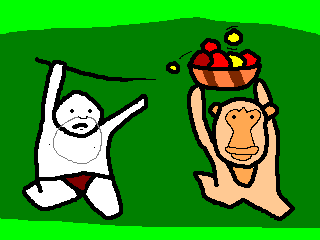 come back here with my priceless harvest of brightly colored circles!Some say Mesopotamia is the cradle of our civilization. Others argue that we are castoffs from Eden, banished by an angry God as the penultimate punishment for eating apples. But I know better. We are all, yes, even the palest and lamest among us, children of mother Africa, for only Africa inflicts upon its inhabitants the refined rancor reserved to mothers alone. How did these monkeys attain their animosity? Scholars may never be sure, but my guess is that they got it the same way anyone in Africa gets anything: foreign aid.

Imagine, if you will, a bedraggled fraternity brother, dual popped collars shading his skin from the sun, intoxicated by the finest fermented antelope piss. He came to Africa to study abroad with his girlfriend because she begged him to help her achieve an epiphany. That is, until he found out that "epiphany" doesn't mean "orgasm," although the final straw came when his girlfriend stopped shaving her legs, started shaving her head, and was accepted by the hyenas as one of their own.

So he wanders into the woods, cursing fate, fortune, and his friends, who are, at that very moment, studying college chemistry with zealous fervor, working with inexhaustible American drive to develop a new and improved date rape drug. Because pot, alcohol, and reality television have turned his brain into a sludgy sack of synapses, he finds Dane Cook entertaining and constantly blasts to him on his iPod. Distracted by the deafening roar of unfunny ringing in his ears, he's an easy target for a local leopard, biding and hiding in the underbrush.

Suddenly, a massive roar startles our hero. The leopard launches itself into the air. Within seconds, it's on top of him, baring its terrible teeth and telling him that it is from Nigeria, and that its lord and master, the leopard Prince Abdu Assah, has entrusted it with millions of boxes of cat nip that need to be hidden in America until the revolution is over. The frat boy panics, and stumbles backwards, where he falls into a giant trap and is spitted upon the spears at the bottom. 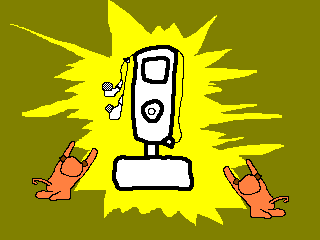 holy god, father of all, keeper of peace and drmWhen a troop of monkeys find him later, his iPod is among the trinkets delivered to their leader. Its innate attractiveness despite its dissimilarity to a banana intrigues the monkey king, and he decides to press some buttons. Since Apple intentionally designs its products to be expertly operated by those standing a few rungs down the evolutionary ladder, the monologue "Monkey Heist" begins to play. As inspiration dawns, and the opening strains of Also Sprach Zarathustra sound eerily in the distance, the monkeys begin to bash the iPod with sticks while jumping high into the air and loudly complimenting the device's impeccable aesthetic.

The sketch is part of a repeating playlist that also includes other college standards like L'il Jon, and so, forty hours later, when the battery finally dies, the monkeys are well educated in the twin arts of heisting and skeeting. They now worship the fallen fraternity brother as their first god, and have created a posthumous mySpace tribute page using the $100 crank-powered laptops that were airdropped over Africa. After briefly lamenting their lack of collars to pop but celebrating their cerebral superiority, they decide to raid the nearest village for booze and broads, so that they may truly live life in the manner of their messiah. And thus the reign of the dreaded fraternity chimps began.