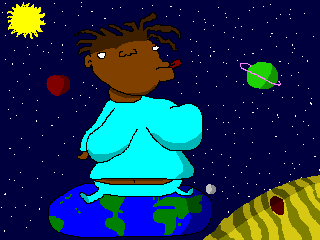 fat earth theory Because menopause never melted my brain, I do not watch The View. Besides, I haven't the time, haven't the energy, and haven't the need, because I go to a state school, and if I wanted to hear stupid people speak with the utmost authority regarding things which they know nothing about I just need to walk around campus. State universities are special in that they are quite possibly the only place where a self-proclaimed environmentalist will earnestly lecture you about the problems of fossil fuels while nonchalantly holding a plastic bottle filled with exotic water harvested from Fiji or Zanzibar or the center of the moon and rocketed by a lake of jet fuel to the local convenience store all because it has exotic minerals and comes in a bottle which looks like an exotic erotic device.

I've pondered, but never known, whether stupid people cause stupid culture or if stupid culture causes stupid people or if the two play off one another and pull us all down in a spiraling vortex of learned retardation. Then someone sent me this clip from The View, during which cohost Sherri Shepherd admits she had no idea whether or not the world was flat. First I watched it. Then I took some aspirin to ease the aneurysm screaming between my ears. Should we, in the future, ever face a population crisis, and have the need to prioritize the people by order of intellectual importance, I believe we should simply euthanize people who watch daytime television, because it is impossible to watch this video without suffering severe mental distress.

In this clip, Whoopi Goldberg prefaces her introduction of evolution by saying she's going to "make this in the way that I speak so it's fun." Somewhere, Charles Darwin is hand-jiving in his grave as the star of Sister Act compares the complex wonders of the world to God sneezing and snapping his fingers. The sad thing, of course, is that Whoopi Goldberg--a high school dropout whose most articulate contribution to the social discourse has been to attend NARAL rallies holding coat hangers aloft in righteous indignation--is the voice of reason in this video.
Whoopi tries to make the (relatively) nuanced argument that neither science nor religion offer all the answers to life's questions, and that the trick lies in finding the middle ground between fact and faith. Meanwhile, Sherri Shepherd, who has just stated that she doesn't believe in evolution, grins like the Cheshire Cat, possibly because she ate him and the rest of the cast from Alice in Wonderland. Watching her wobble while she talked was morbidly fascinating. I tried to count her chins but I stopped after infinity. During the entire segment I kept expecting the coffee cups and then the cohosts to slowly rise into the air and drift into asynchronous orbit around her waist. Watch out Jupiter, Sherri Shepherd is about to overtake you as the celestial object with the most moons in the solar system.
Whoopi notices the empty expression in Sherri's eyes, and, in a courageous move, asks her opinion. I say courageous because the last thing I'd want someone with that sort of mental vacuum to do is open her maw for fear I might be sucked inside and imprisoned for millenia like that barbarian warlord from Return to Castle Wolfenstein. What followed can only be described as mind-numbing.