We start with Chronicle, a film that combines two genres that are getting on everybody's nerves, with predictable results. Following that up, we have The Rock taking on Jules Verne in Journey 2: The Mysterious Island; Drew Barrymore saving whales in Big Miracle; and Daniel Radcliffe not being Harry Potter in The Woman in Black.

EXPECTATIONS: Some months ago, I saw a rather mysterious trailer for a found-footage film about telekinetic teenagers. This film is, of course, Chronicle. I was excited at first, but the excitement waned when I learned Chronicle had an early-February release date. (February traditionally serves as the dumping ground for movies deemed too shitty for release in the previous year.) Flash-forward to Feb. 3, the date of its release; as I write this, I see that Chronicle is receiving a lot of critical praise, with at least one critic writing that Chronicle is "destined to become a sci-fi classic." Well, color me surprised. I'm excited again!

REALITY: I should've trusted my release-date instincts. Chronicle isn't complete shit, but it's so far from a "sci-fi classic" and so undeserving of the universal praise it has been receiving. I'm in the midst of a perception crisis: Did I watch the same movie these other critics did?

Chronicle follows three teenagers -- Andrew (Unknown Actor #1), Alex (Unknown Actor #2) and Steve (Wallace from The Wire) -- as they stumble upon a presumably alien touchstone, of sorts, outside of a farmland rave. Before you can say "Tommyknockers!" they're developing ESP and moving Legos with their minds. Andrew, ostensibly our protagonist, is a troubled kid, the victim of an alcoholic father and schoolmates who (correctly) think he's weird for walking around with a VHS camera and taping everything. Soon, Andrew uses ESP to run a truck off the road and our three teenagers are suddenly in over their heads. 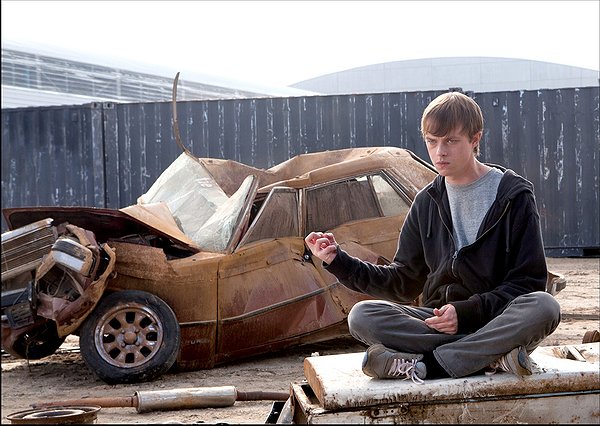 Aiming high, this young man uses his newfound superpowers to help out down at the local tip.

One of the inherent obstacles to constructing a successful found-footage horror movie is sufficiently explaining the presence of the camera or creating a movie that's so strong because of its form that we're willing to suspend our disbelief and just roll with it. Few, if any, movies have achieved the former, while a whole crop of films have achieved the latter. Chronicle does neither, and because it draws so much attention to its found-footage nature and the questionable VFX on display, it's a rather alienating film. Every time you try to slip into the narrative, Chronicle goes out of its way to push you right back out.

Languid pacing is Chronicle's foremost flaw. For a film that's 84 minutes long, it takes absolutely forever to get going. A full 20 minutes passes before the irritating "teenagers" (most of whom are actually in their mid-twenties) find the hole, and it proceeds in fits from there: ten minutes of exposition, two minutes of action, repeat until a ludicrous ending in which director Josh Trank makes all the wrong choices. Buried within this plodding dud is a truly compelling 20-minute stretch that finds our characters testing the limits of their new abilities, and a genuinely disturbing sequence in which Andrew realizes the gruesome extent of his powers. 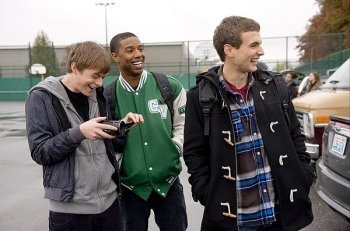 This is what most teenagers would do with superpowers, right after they use them to get laid.As a champion of found-footage films (I'm far more forgiving than other critics when it comes to the genre), I must emphasize that Chronicle, more than any other, is actually weakened by its presentation through found footage. The choice of form seems rather arbitrary here, and while the form suits horror movies that benefit from the claustrophobic intensity generated by such a device, Chronicle is neither a horror movie nor a movie that should be boxed in. It may be plodding, but it attempts to tell a big story (comparisons to Unbreakable are apt), and when filmmakers choose to show massive explosions through grainy, soundless surveillance cameras, I have to question their sense of spectacle.

Michael Bay may appear to be an arrogant jock, but with that supposed arrogance comes the confidence to present his carnage on the grandest scale possible; contrast him with Trank, who seems hellbent on draining the thrills from what could've been epic action set pieces. Only one solitary scene utilizes the full power of the VFX department, as Andrew waves his hand to knock back a small crop of police cars, and that's in the trailer. Every other sequence calls attention to itself through the use of CGI that either seems a little too airy and ungrounded or is fully neutered when Trank switches sources of the found footage (a trick he uses a lot).

Then there are the few scenes that are shown through no discernible source, as if Trank forgot what kind of film he was making and said, "Fuck it, I'm gonna film this third-person." It's almost as jarring as Apollo 18, the ending of which generated a most unfortunate question: How are we watching found footage that's been jettisoned into space? Well, how am I watching Andrew, alone and unconscious in a hospital bed, through a feature-worthy camera that has no business being in that room?

It's questions like these that doom Chronicle to the middle ranks. I'm not asking that a found-footage film be airtight (they never are). I'm just asking that it not leak so goddamn much.

* Relative to the final act of Fast Five, which sets the gold standard for cops dying by the dozen.

MINORITY REPORT: I think what a lot of filmmakers forget when they do a "found footage" film is that they aren't just directing a film, they are also playing lead character in that film. The identity and voice of the film has to feel real and personal or the whole thing falls apart. - Ian "Professor Clumsy" Maddison