One of the most common misconceptions about television is that programming is in the decline. People believe that there is more of it, sure, but it's generally worse. They think that the glut of shows with people eating bugs for money is somehow indicative of the downfall of the medium. It's the old "57 Channels and Nothin' On" myth first introduced by Bruce Springsteen. I guess the Boss forgot that when there were just three channels there still wasn't anything on and now that there are 850 it's all still shit.

For those of you who feel nostalgia for the television of the past I'd advise you to take a gander at a "classic" rerun of a show that is not your obsessive favorite some time. "I Love Lucy," for example, is widely considered to be one of the best TV shows of all time. In fact, it is scientifically demonstrable as one of the worst TV shows of all time. Did you know that roughly 30 percent of the dialogue in a given "I Love Lucy" script can be found in every "I Love Lucy" script?

Of course you didn't know that, because you think that television reached its nadir when MTV stopped playing advertisements for shitty bands and started showing shitty reality programs. Do you honestly think "Laguna Beach" is worse than 17 Puff Daddy videos? They weren't Indiana Jones exchanging the golden idol for a bag of sand; they fucking swapped a bag of rat turds for a bag of bat guano. TV never had a glory day. It has been one century-spanning holding pattern of mediocrity with a few bumps and jostles of modest improvement scattered here and there.

I'm not concerned with reliving the shit of generations past. We've got a whole bilge-full of excrement to process daily, so let's dig in. 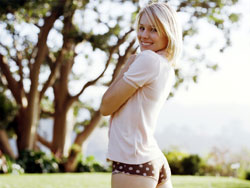 She wouldn't give you a second look, nerd.Veronica Mars has been described in intolerably smug jargon-filled articles in "Variety" as a sort of "Beverly Hills 90210 meets Twin Peaks" or "The OC meets Buffy: The Vampire Slayer." That's the sort of accusation you wouldn't want leveled at a hardened criminal, yet I think it's meant to be a compliment. I watched most of the first season of "Veronica Mars" and I would say it was more like one of those 1950s "youths gone wild" films meant to terrify the stupid. You know, the ones designed to get people to think there are roving gangs of teenagers out of their mind on ganja committing armed robbery and various necking violations. "Becky decided to chase the dragon, but all she caught was heartbreak."

The show centers on Veronica Mars - whose name is always spoken in full in case you forget who the main character is - and her life as a horribly attractive outsider-cum-detective who has been ostracized by her outrageously tormented rich-kid peers. Veronica Mars helps her father's private detective business and also solves mysteries for kids at the high school. She also has an adorable little black sidekick who was sent down from central casting after a careful vetting process to determine the actor least likely to startle the nerdy all-white fan base. Veronica Mars (see how annoying that is getting?) spent the first season solving the murder of her best friend. With that done, what could they do with the show for season two?

It's hard to say. For some reason TiVo recorded most of the episodes that have aired in the second season, but I couldn't sit through the first episode. In that single episode they managed to shoehorn at least a dozen flashbacks into the span of the first twenty minutes. They also introduce characters who were totally like, her best friends, but you know, like, she forgot they existed for the first season and now they're totally important. Eventually I may try to finish those last fifteen minutes of the episode, but as far as I'm concerned the show should be cancelled immediately.

Prime Offense: I don't know if I'd call it an offense, but Harry Hamlin is absolutely hilarious whenever he beats his children on the show. I think it's meant to be heart-wrenching but it's the most delightfully melodramatic child abuse since Faye Dunaway started shrieking about wire hangers. I would tune in to this show religiously if it was just Hamlin beating his noxious offspring while his wife turns away and sips a cocktail sadly. 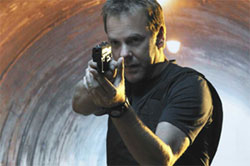 Somebody gon' get shot.Raspy thespian Kiefer Sutherland has suddenly bounced back to super-stardom thanks to this gimmicky surprise smash hit. Sutherland brings dinner-theater acting to your living room with Jack Bauer, a loose-cannon special agent who has, by this point, had several worst days ever. The show's premise pretty much condemns its stories and action to the realm of the ridiculous, but that hasn't stopped most of the first world from tuning in each week to see Jack Bauer beat the ever-living shit out of people.

In any movie or TV show one of the easiest ways to build tension is to set a time limit or hang some impending disaster over the head of the characters. "In ten minutes the bomb will go off!" is probably the simplest way of doing this and that's pretty much the level at which 24 keeps things. It's mostly unpretentious about it, which is commendable, but the fact that the show requires expanding a single day to about 18 hours of programming means throwing in an outlandish density of plot twists and subplots.

Prime Offense: If ever a show needed to break the TV golden rule about going to the bathroom on camera it's this one. Doesn't Jack Bauer ever have to drop some kids off at the pool or shake the weasel? I would also like to get my hands on some of these magical "always three bars" cellular phones these people have. 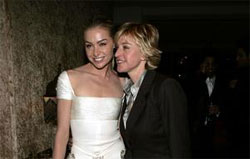 Why couldn't you pick the other one, Portia?Arrested Development is a show about the comically dysfunctional Bluth family. Empty suit Jason Bateman provides the straight man for his family of hilarious archetypes, Ron Howard provides overbearing narration and the use of handheld DV cameras gives the show a totally unique "Curb Your Enthusiasm" feel.

While the show is widely acclaimed as the funniest situation comedy on TV, ratings success continues to elude it and it has only avoided cancellation through annoying grass roots fan efforts. I can agree with the critics that the show represents the height of the situation comedy, but fans should be offended. They think "Arrested Development" is some unique and original work, but it's really just a calculated refinement of sitcom conventions. Worse still, this calculation has obviously failed based on the show's abysmal ratings.

The dialogue is snappy and the situations are comedy. That said, the characters are glaringly one-dimensional, the plots are predictable and the setups are generally just slight modifications of things seen elsewhere. The show frequently reuses plotlines like "dad escapes from jail", "dad is mistaken for his brother" and "Gob wants more responsibility with the family business."

Probably its most frequent annoyance is the narration, which over-explains character's actions and thoughts to the point that you wish you could mute it. "And that's when Michael realized…" and then just fill in the blank with whatever you know he would be realizing ten minutes ago. It's probably the most annoying script-writer's bad habit since the intolerably lazy "remember that time when…" from Family Guy.

Prime Offense: Thanks to Portia de Rossi's coming out I can't help but picture 'Donnie Brasco" era Anne Heche going down on de Rossi like a pig at the trough. I bet seeing them go at it would be like watching butterflies migrate or hearing a samurai recite a haiku he wrote only with a "squick squick squick" sound in the background. Too bad she fell for Ellen instead. 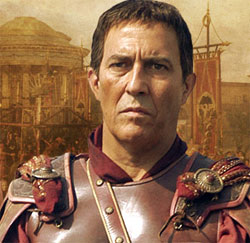 How about not forcing us to imagineer the next battle.HBO has become the darling network of the Emmy's thanks to - let's face it - the network's ability to create programming without any censors watching over their shoulders. While "The Shield" can only show some guy getting his face pressed down onto a burner or imply that a guy is forced to give another guy a blowjob, HBO is free to show minutes on end of brutal torture and is actually required by the FCC to include lesbian sex in every series. No series on HBO to date, not even the prison drama Oz, has ever demonstrated just how far HBO can take things quite like Rome. It's drenched in blood and tits to the point that I'm expecting a future episode to feature blood actually spraying from tits.

Rome fluctuates between grand political intrigues and private family dramas. The political intrigues are generally more entertaining and the two stars of the show are Ciaran Hinds as Gaius Julius Caesar and Ray Stevenson as Titus Pollo. Hinds is magnetic as Caesar and Stevenson's Pollo, a hedonistic legionary, draws you in as he guilelessly batters and fucks his way through the show. The perpetually vexed Lucius Vorenus is less enthralling as he deals with his unfaithful wife and her pensive worry. His character can be best described as a constantly furrowed brow and whenever he's on the screen and Titus Pollo isn't around you know it's time to go take a leak or make a drink.

The show is entertaining to watch, but it frequently excises long passages of time so that they can jump from major historical events rapidly, leaving it to the viewer to just wonder what happened during the interim. Due to budget constraints the show also usually turns major battles into vague montages or removes them completely. Probably the worst of these is when Caesar rides to face his enemy while outnumbered several times. As he is riding you get a montage of people fighting and a banner falling. I thought it was Caesar imagining his defeat at the hands of his enemies, but then the next scene was Caesar retiring to his tent victorious after the fight.

Prime Offense: I hate to say this, but the show has too much sex. Most of the time it's useful for the plot, but frequently they will throw in sex scenes (Mark Antony coaxing two naked women to fight each other with knives springs to mind) just to keep things lively. I also groaned when I realized that two of the characters were going to turn into lesbians. Women making out are hot, we know, but HBO seriously needs to reconsider featuring lesbians in every single one of their shows. I actually started this series wondering which characters were going to prove to be lesbian and my guess was dead on. HBO can disregard this critique if their next show is going to be a reality show about Portia de Rossi's bedroom antics.

That's all for this installment of Your TV Show Sucks. Thanks to Dr. Thorpe for the general "Your Blank Sucks" premise and to all of these studios for green lighting mediocre shows. If you have a show you'd like me to talk about in a future update like this, feel free to send me your suggestion. If you have comments or criticism you can keep them to yourself, because you're absolutely unqualified to offer them.