Dispatches From The Man Cave

A two-week investigation by Johnson City police led to the arrest of 40 men on charges of indecent behavior in city parks. The undercover investigation, conducted primarily in Winged Deer and Buffalo Mountain parks, is just the beginning for authorities, who say homosexual activities there have become a "serious problem."

"Our parks are for family use. People should not be exposed to this while they are out there with their family or trying to enjoy the walking trails," said Johnson City Police Chief John Lowry. "They are not built nor maintained for sexual activity, be it homosexual activity or heterosexual activity."

"Part of this took place off the paved trails. There's a thing out there (at Winged Deer Park) they've evidently termed the 'Man Cave,'" Lowry said. "It's a good way off the paved trail. It's underbrush that's grown up and resembles a cave."

According to investigators, men frequent the Man Cave at all times of day specifically to take part in sexual activities with other men. Several men exposed their genitals to the officers, while a few even groped the investigators without being provoked, police said.

Authorities said Monday they fear the two parks have become known, "by word of mouth," as places for such illegal activity. Those arrested in the recent sting live in various areas of Tennessee, Virginia and North Carolina. They range in age from 26 to 85.

In an effort to eliminate areas of opportunity within the parks, authorities said they plan to destroy the Man Cave at Winged Deer Park, possibly with a controlled burn. 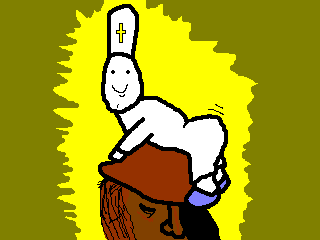 But now, a scant 510 years after some of the finest art ever produced was destroyed by moralistic madmen, another priceless work of art is about to vanish into a cloud of seminal smoke. I speak, of course, of the Johnson City Man Cave.

I don't like to brag about it, but my long list of academic achievements includes an honorary Masters in Mancaveology, which I was awarded for my unprecedented research into the oft-overlooked field of public prolapse. My experience in the field is unique, for once, in my youth, I was privileged enough to study at a large and famous and riotous and altogether too often on fire state university in western Massachusetts. It was during that time that I, along with of several young, lusty, sharply dressed young engineering students with whom I lived, befriended some of the unfortunate and unwilling lesbians who seem to spring into being from the very grounds of Smith College.

On a sparkling springtime evening we were prowling the grounds like so many satyrs when a group of these nubile nymphs appeared and asked us to accompany them into a nearby forest. Piping merrily, we soon found ourselves ensconced in the bosom of the wood where, our angelic and only slightly less hairy counterparts disrobed and flitted through the forest, giggling all the while.