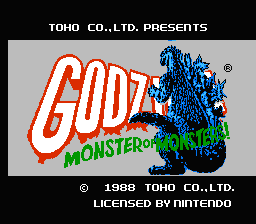 At a Glance: On a sacred hill in a fantastical land, far away from civilization and endless Lifetime Original Movies, there is an old bearded mystic who maintains that film is a vehicle for art. I'm pretty sure that's a good sign of the dementia setting in, as movies have been used since 1915 to show off how astoundingly stupid the human race is. So that's why I like the Godzilla franchise, because it admits what they fucking should be: Retarded bullshit. Or at the very least, it retard-proofs them, because nobody could ever care about a film featuring two mutated slabs of muscle beating the shit out of each other. Oh, wait.
Platform: Nintendo Entertainment System, 1988
Know a terrible ROM? Email me! 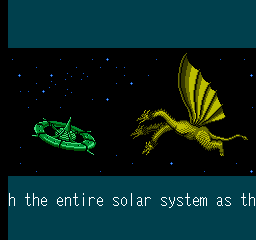 Gameplay: Godzilla, much like a giganotosaurus with broken kneecaps, lurches along at an agonizingly slow pace. Each world consists of a "planet," which actually equates to a bizarre honeycomb map. You're supposed to manipulate Godzilla and/or Mothra through the little tiles, but apparently all of that radiation has finally caused our monsters' brains to hemorrage, because they can't even walk in a straight line properly. I don't know how hard it can possibly be to program "GO FORWARD," but the game routinely misinterperated this simple request as "go sideways" "go backward" or "maybe you should just sit down and think about the mysteries of Life" before opting to yell at me in Engrish.

Once you dick your way through Jerry Senfield's wet dream, you enter a sidescrolling map. This is where you're accosted by billions of angry little dots that, despite flying in a formation as thick as a typical reality TV contestant's skull, are mysteriously impossible to hit. Fortunately you don't have to kill them, just survive their relentless knock-backing until you get to the edge of the screen. At which point, after a brief moment of suspense, you arrive at... an identical screen. If you're lucky, you might even go through a third identical screen 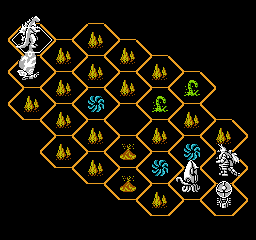 Intellectual checkmate.before being returned to the world map, at which point you move again and--

Wait. This is the same level. Do you mean to tell me I have to redo the same level six to ten times before I actually beat the world? But what about those different icons on the map? Surely if I go to a whirlpool square it will take me to some kind of-- GOD DAMMIT.

Graphics: Despite the colors and textures being, at the very least, less offensive than the Holocaust, the finished product leaves something to be desired. The animation, first off, is shit: Mothra spazzes through dimensions as she attempts to use her attacks, and Godzilla's languid movement makes him seem like he's tripping balls as he swims through jello. But none of that is as bad as the game's spectacular lack of effort, which could quite possibly drive you to abuse alcohol until your entire family decides that it hates you so you end up shooting up heroin into your eyeballs in a soggy cardboard box in an abandoned alleyway somewhere silently masturbating with a handful of barbed wire clutched in your fist and you do not cry for you have forgotten how just as you have forgotten what it means to have faith in your fellow man.

Harsh? Oh hey, did you forget the part where EACH OF THE TEN "WORLDS" HAS THE SAME FUCKING LEVEL LOOPING OVER AND OVER AGAIN?

BUTAN MOSH: Occasionally, you will get into super-duper one-on-one fighting-game-esque goddamn-I-love-hyphens sequences in the game, in which you battle rival monsters. I think eventually you can unlock theother monsters you fight, but that would require dedication, and becoming dedicated to Godzilla is sort of like the guy who skips his classes in order to raid in World of Warcraft. Incidentally, if you are that guy, thanks for lowering the bar for success for everyone else!

I'll give the game credit in that the combos are sane; you're never pushing more than two buttons at once, and you only know two or three attacks. Unfortunately I'm forced to finally dismount from my HA HA I'M SUPERIOR 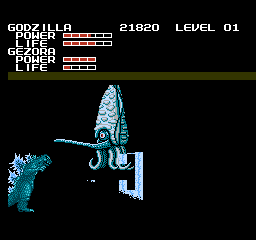 This is a beam attack of only the highest quality.TO ALL OF YOU NECKBEARDS WHO KNOW HOW TO PLAY VIDEO GAMES and admit that... this is boring. Also, the controls are bad. Mothra can only attack by shooting very short-range pellets or by dropping bombs of reasonable strength. Unfortunately, they also wipe out the Nintendo's graphics chip. Jello-Godzilla isn't much better. He can punch, kick, and swing his tail, but these attacks are angled perfectly so that THEY'LL NEVER HIT DICK.

Fun: This game was the most funnest part of a funtacular day! I woke up wheezing from a series of paper cuts on my trachea, watched my cat get fucked to death by this fellow, had my toes run over by a hearse carrying my mother's violated corpse! Afterwards I got stalked around campus a bit by some guy who will only address me as "Waptor-chan^_^", caught my boyfriend getting pegged by an awkwardly cock-hungry girl because she PLAYS VIDEO GAMES, and discovered that puppies are now illegal!

Of course this game isn't fucking fun, you stupid sack of shit.

Defining Moment: You couldn't really appreciate the laziness that went into Godzilla if it weren't for the one-on-one battle segments. Nevermind that they didn't bother to draw a background, because with such a useless array of attacks at your disposal, the only way to win the "battle" is to mash your special attack button (which is START. What the Christ?) every time the thing gets close because YOU CAN'T FUCKING TURN AROUND. Seriously, how hard would that have been? What makes it worse is--

Wait, no. You know what? I'm stopping. I'm going to lie down before I find any needles.

Each category in the rating system is based out of a possible -10 score (-10 being the worst). Actually, 0 is the worst, too. Every game in the ROM Pit is the worst, or else Lowtax wouldn't let me out of my cage to play it.