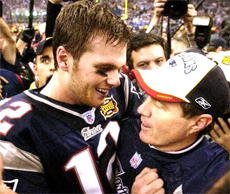 2005: Will this be the year Tom Brady and Bill Belichick finally sleep together?With the NFL pre-season underway, it's time to predict which team will throw the old pigskin all the way into the Super Bowl. As usual, you can't count on sites like ESPN or Sports Illustrated to provide accurate predictions, so Something Awful is here to break down exactly how the 2005 National Football League season will go down.

New England Patriots - Despite linebackers having strokes all over the place and Bill Belichick calling offensive plays he's stolen mostly from NES Tecmo Bowl, the Patriots manage to win the AFC East. After backup QB Doug Flutie throws an incomplete pass during practice before week 6, starting QB Tom Brady remarks, "nice pass, Doug... but it fell a little bit short you f**kin wicked midget shrimp!" Flutie then proceeds to throw a bowl of hot clam chowder in Brady's face and punch him in the gut.

New York Jets - Chad Pennington hands the ball to Curtis Martin and then on ESPN NFL Countdown Chris Berman uses that same Curtis "My Favorite" Martin joke he's been using for over a decade now. IT'S STILL HILARIOUS, CHRIS!

Buffalo Bills - Drafting quarterbacks from California has worked out great for the Bills! Last time they ended up with Rob Johnson, an excellent holder. And by "holder" I don't mean, "guy who holds the ball for the placekicker," I mean, "guy who drops back, never throws the ball, and gets sacked 14 times a game." New QB J.P. Losman will suck slightly less than Johnson, but backup QB Kelly Holcomb will be starting by week 6. And I'll still be pissed that Norwood blew my only chance of seeing the Bills win a Super Bowl in my lifetime. 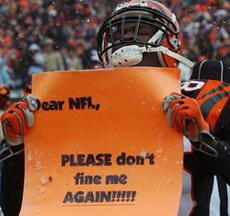 Cincinnati Bengals - After sucking for like 15 years, the Bengals finally manage to win the division and make the playoffs. Carson Palmer -- who has the second-most rich whiteboy name in the league after Chad Pennington -- has a monster year. Wide Receiving attention whore Chad Johnson says something controversial involving having sex with Oprah Winfrey by mid-season and Marvin Lewis will refer to a rude bellboy at a Tennessean hotel as "a real douche bag."

Pittsburgh Steelers - Ben Roethlisberger struggles, prompting Chris Berman to say things like, "it looks like the Roethlisberger isn't cutting the mustard!" Former XFL QB Tommy Maddox will clothesline WR Hines Ward, then bodyslam him into a folding table before week 2's game against Houston, putting Ward on the DL for the rest of the season. Bill Cowher will lose a lot of key games, but he won't lose that creepy mustache.

Baltimore Ravens - Deion Sanders gets injured, Ed Reed intercepts a few balls, Ray Lewis struts around like a retard, Kyle Boller puts up a sub-70 QB rating, and the Ravens once vaunted defense continues to decline. Head coach Brian Billick is once again confused with Bill Belichick at the supermarket. Billick also spends ten minutes talking with first round draft pick WR Mark Clayton, trying to understand what exactly "skeet skeet" means. Clayton is too embarrassed to fess up, so he just tells the coach it means "having fun."

Cleveland Browns - Around Cleveland, I imagine there's a joke that goes something like, "why are the Cleveland Browns called the Browns? BECAUSE THEY'RE SHIT!" And it's true. For some reason, the Browns decided to sign Trent Dilfer to a four-year deal to be their starting quarterback this season. I guess Cleveland loves signing balding quarterbacks because last year they had Jeff Garcia. New head coach Romeo Crennel vomits into a plastic trashcan after eating some bad White Castle in Minnesota and that's pretty much the highlight of his year. 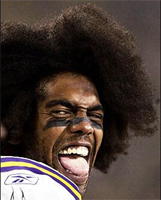 Indianapolis Colts - Peyton Manning throws a lot of touchdowns and the Colts easily win the division. During the week 8 bye, Kicker Mike Vanderjagt is quoted as saying that New England's Tom Brady is a "huge fairy" and openly speculates that Brady is "jamming it it into [Running back] Corey Dillon's backfield, like, all the time."

Jacksonville Jaguars, Houston Texans, Tennessee Titans - There's really not too much to say about these teams because A) they're not very interesting and B) they're all missing the playoffs. The Texans manage to barely eek over .500, Steve McNair continues to disintegrate, and Jacksonville's first-round draft pick Matt Jones ends up being a completely useless 6'6" guy on the sidelines in street clothes clapping his hands.

San Diego Chargers - Everybody knows head coach Marty Schottenheimer is going to totally muck things up at some point, but the question is when? Still, unless the defense totally sucks, the Chargers will be losing a game in the playoffs for sure. Antonio "Bill" Gates will catch less than 8 touchdowns. Don't watch ESPN's NFL Countdown the week the Chargers wear their alternate powder blue uniforms because every time they do, Chris Berman screams about how cool they look and loudly starts ejaculating all over his desk.

Oakland Raiders - If you're an asshole or a scumbag, you're probably a Raiders fan. The Raiders pretty much consist of talented players that are too dumb, egotistical, emotionally unstable, or just plain too crazy for the rest of the league. So it's really no surprise that they signed Randy Moss. The Raiders will make the playoffs if the following things happen: 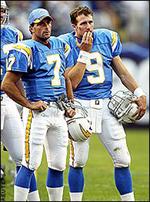 "OH MY GAWD THE CHARGER BLUE UNIFORMS ARE SO AMAZING THEY ARE THE BEST BLAH BLAH" shut up.

Kansas City Chiefs - For the past couple years, the Chiefs have been trying to fix their defense, acting as if their offense is some kind of flawless perfect machine. Unfortunately, they apparently neglected to notice Trent Green is their quarterback. Lowtax attends the week 9 loss to Oakland and whines like a little bitch over the quality of his beer. The Chiefs have another disappointing, inconsistent, generally crappy season and head coach Dick Vermeil gives a weepy retirement speech at the end of the year.

Denver Broncos - If you found a blind man dying of syphilis and asked him to put together a fantasy team, the roster he would come up with would probably very closely resemble that of the 2005 Denver Broncos. This year, they imported four defensive linemen from the Browns. The BROWNS. They brought in 42-year-old WR Jerry Rice because he refuses to retire with dignity; kind of like baseball's Ricky Henderson, except Rice is less of a jerk. They inexplicably drafted Maurice Clarett, maybe because they decided they needed some more crybaby drama in the locker room? Who knows. Anyways, QB Jake Plummer will make like a plumber and lead the team down the drain, into the septic system that is last place.

That's all for the AFC. Look for the NFC preview in two weeks, right here on Something Awful: your #1 source for sports commentary written by huge nerds!