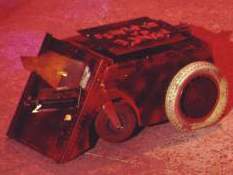 Overview: Geek wannabes construct crappy homemade "robots" and face them off in an arena while the commentator uses the words "carnage" and "destruction". A lot.

People most directly responsible for this: BBC2.

The Case For: See wannabe geeks get their two weeks of blood, sweat, and tears demolished in one almighty shebang...

The Case Against: ...but only if the robots ever actually move. 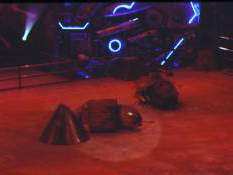 Compared to American "Soft Core" television viewing, British TV can get rather risqué. In some cases it gets downright sick. At the forefront of this very welcome smut generation are BBC2 and Channel 4. Channel 4 is, in fact, so dirty, that in it's infancy, so much porn was displayed late at night that television guides in newspapers put up red triangles to warn against unsuitable material for children under the age of 27. BBC2, however, simply tries to copy Channel 4 by getting obscuro foreign films aired in the middle of the night (they promise a lot of sex, and sadly enough, never deliver). During the rest of the day, it's a gardener's / geek's paradise. You can watch one and a half hours of gardening programs on a Friday night, and on some Sundays, "7 of 9" comes on in her very tight body suit. VERY tight.

"And here to host robot wars, a man who polishes his buttons every time he does a panto; Craig Charles!" Craig Charles is the comedy genius who reads out words in "Red Dwarf" and "pretends" to be a smelly wanker. At this point, our dirty host tries out some of his own stand up, probably to prove he's not talentless scum. Unfortunately, his idea of standup is literally standing up and seemingly saying words in no particular order.

You know how dropout actors in American hit sitcoms manage to find their way into b-movies? Well it works differently in England. In England, after heading one of the most successful sci-fi comedy series ever, you are presented a gameshow (of your choice). Thankfully, gameshows have the same affect as b-movies, essentially killing off the dropout actor forever. The guy who acted as "Kriton" in the same series, for example, presented a gameshow where you have to make helicopters, machine guns and submarines by using nothing but a local scrap yard. His body was never found. Likewise, the actor for "Kat" has not been see outside a brothel in south London since the last series. But I think this may be his day job.

Next up we get countless stats for all the robots, as well as highlights of their matches so far (using the word "highlights" here really does push the English language to its limits). The statistics layouts are ripped straight out of "Gladiators" but are far more cheesy, especially with that fucking commentator rambling in the background. If you want to know what the commentator sounds like, get an operation on your brain to remove all traces of vocabulary, sit on the toilet with a rhyming dictionary while constipated, push really hard on your unborn stool, and start reading the rhyming dictionary out loud. Even though the commentary is recorded AFTER filming, the commentator feels it's necessary to read out every stat presented to us in his husky and very strained voice (as you know, 90% of the UK population can't actually read, so apart from the feeling of being dragged over a giant cheese grater, this dictation is quite useful to us):

Name: Henry
Weight: 60lb
Weight Class: Featherweight
Weapons: A small spike & a photo of their grandmother
Turning Circle: 0 (this is only ever 0 or 20 metres)
Maximum Speed: 2 mph
Engines: Wheelchair motors (sadly, you can't make this stuff up) 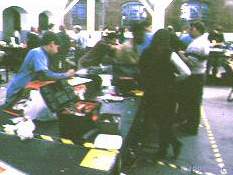 All the wankers have to be herded behind the striped lines.

Now I'm happy to admit that the photo of the ugly old bitch on the back of their bot is just a joke, but you would not believe the amount of bot makers who seem to think that putting a drawing pin on the front of their robot as a primary weapon is really going to make any difference. And you'd think that if you were going to bother with actually making a qualifying robot, you'd make it cool AND make it work.

A common weapon in the wars is the buzz-saw, but they're powered by secondary electric motors like the ones you used at school (the 9 volt ones which couldn't winch up a 100 gram weight). The bots charge in with their deadly, whirring saws, which immediately stop dead on contact. You also tend to see "powered by wheelchair motors" a lot in the stats. I can only say that coaxing a cripple into giving you their wheelchair motors would actually be a lot of fun.

Before the main event though, we spend two minutes getting "in-depth" interviews with the makers of the bots. The bot enthusiasts come in 3 categories:

1. 20-something students passing up their robot as a psychology thesis.
2. 50-somethings dirty-old-men with huge beards and "overclocked armpit moisturizers".
3. Single / out of work engineers who bring their kids / very ugly girlfriends for sympathy points.

All the bot teams are forced to wear Robot Wars T-shirts, which can be very offputting when the subject has enormous, lactating man-breasts. In general the competitors are geeky... but in a dreadfully scary way. If you met them while they were building their bot, you would be very scared with the limp wristed way they handled a power drill. There's also a competitor whose gender I still can't decide (after three series of this crap) - and nor, it seems, can the pit interviewer.

At fucking last, the first fight begins... and oh! What's this? Neither the drawing pin encrusted "CyberHedgeHog" or paper maché "Velociraptor" are moving! But there's still five minutes of the match left! Let's just sit and watch them JUST IN CASE!

After you come back from kitchen for a bucket of warm water and a razor, they actually seem to have moved! It can't be, can it? YES! They were moving the WHOLE TIME! At the halfway stage in the match (2 minutes, 30 seconds) the bots have eventually covered 5 metres total and collided. The stronger bot pushes the back end of the opposing bot around in circles at incredible speeds of 0.5 degrees a second. The rules require the bots to separate after one minute of contact to stop deadlock, so the faster bot backs out and immediately falls in the "Pit of Despair / Doom / Gloom / Armageddon / Destruction" (depending on what new word the commentator has looked up that week), which is a square hole cut in the ground. This disqualifies him by default. We are shown slow motion replays of the slow motion action from all 2 slow motion camera angles while the commentator tries to alliterate the the bot's name by going through the entire alphabet. If he can't make a cheap pun, he gives up and says "CARNAGE AND CATASTROPHE!" referring to the slightly grazed paintwork of the bots. This actually counts as damage! The paper mache robot eventually carries on to win the final.

Craig Charles is then allowed to speak - this is quite a treat, as the main commentator's voice has already sanded off three layers of my laminate table with his voice. Craig turns to the winners first (always on his right hand side, so he can remember who to congratulate). His congratulations are always the same: "Wow. You beat the favorites and you're going into the next round - how do you feel?" The response is always the same "Great. Pfff-HEHE.. tehehe!" (too much nervous giggling ensues and is cut - there's about 500 metres of film of people saying "WOW! it's really Lister!" on the cutting room floor)

He then turns to his left and remarks, "Aww. I thought you were going to win! What went wrong?" And hey! you only have to repeat this entire ordeal for six more matches and the program finishes!

In the UK you have to put up with having only four channels to surf between, and this can be damn annoying. It does mean the quality of television has to be lifted to even be shown. And as Craig Charles would say at the end of an episode: "The only show against this cause, seems to be ROBOT WARS (TM)" (Yes, he has to make something rhyme at the END OF EVERY FUCKING SHOW).