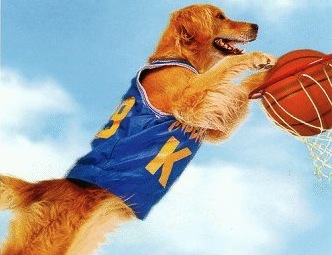 From personal experience, I can assure you that this picture has been doctored.Okay team, let's all quiet down. Now, it'd be a bit of an understatement if I said that this wasn't exactly a banner year for Walsh Heating and Plumbing teen basketball. I've proudly sponsored and coached amateur basketball since 1986, but this is the first time in my life where I have suffered so much shame and regret over investing a good portion of my life in such a dismal failure of a season. Before you start grumbling, I now realize letting that sickly boy join our team at the beginning of the season was probably a mistake, even though we got our share of heartwarming local front page news stories out of the deal. Little did I know that Leukemia Larry over there couldn't pass a basketball to save his life--and then we had to forfeit three games just to go to his out-of-state funeral? It doesn't take a child's death alone to make you realize that life is unfair.

But I gather you here today not to speak ill of the dead; we did that enough at last Friday's pizza party. Boys, I'm just going to come out and say it: we have to cut Sprinkles. 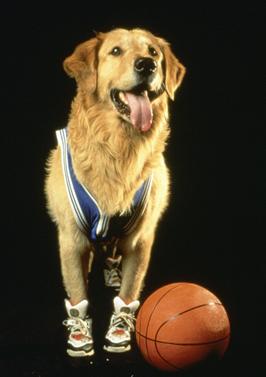 Yeah, sure. "Aww" your hearts out. Maybe it'll cover up the sound of him sucking out loud.This was a hard decision for me to make, especially because Sprinkles was my idea in the first place. I shouldn't have to tell you that little Larry limping around the court really packed 'em in--Shirley down in concessions told me they went through five things of fruit punch a night! It was while babysitting my grandson Jason that I stumbled across Mr. Make-A-Wish's replacement; there on the DVD shelf, a little movie called Air Bud? Of course, a dog playing basketball! I watched this documentary several times, and it all seemed so plausible. Blame movie magic, I guess. Larry barely had time to start rotting before I was scouring the streets of our fine city, looking for the finest hound that money wasn't going to buy.

There he was, shivering underneath a freeway overpass: our little golden retriever buddy, Sprinkles. Remembering my boy scout training, I quickly hogtied him with an extension cord and drove him back to my garage, where I spent countless hours combing and burning most of the vermin colonies from his fur. And who can forget Sprinkles' first game, when he started as center? Sure, he spent most of the first half trying to yank off his adorable little jersey, but the crowd was absolutely enthralled. Soon after that, we changed our team's name from the Walsh Heating and Plumbing Spartans to the Walsh Heating and Plumbing Air Buds. Then, after that cease and desist letter from Disney, the Walsh Heating and Plumbing Sky Friends. Well boys, we're about due for another name change, one that doesn't involve pals or the atmosphere.

Listen, when people show up to a basketball game, they're here to watch basketball. Those folks pay their three dollars at the door and expect to see us perform to the best of our abilities. Boys, I don't know how to tell you this, but I'm beginning to think that dogs just can't play basketball. And I walked into this situation fully aware of your average dog's capabilities--but I guess the world has a way of surprising us all. Boys, we've played 20 games with that damn dog I haven't seen him interact with that ball in any other way aside from barking at it. Yes, there was the one time when it accidentally bounced off his head and one of you boys gave him an assist, but to date that remains the only positive recordable statistic on Sprinkles' record. 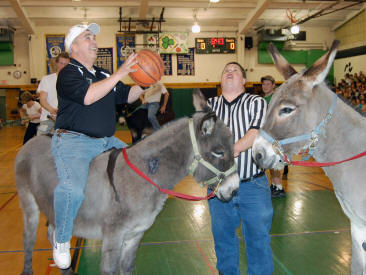 If our children don't get used to animal-based sports now, how will they ever play in the donkey basketball leagues of the future?And you all should be well aware of Sprinkles' dark side; it might one day become a liability to the Sky Friends. Remember when Coby Johnson threw that elbow at Sprinkles for crowding him in the paint? It took me, two refs, and the superintendent to tear that dog away from the poor boy's throat. And fighting isn't Sprinkles only vice; that mutt sure has a taste for dogs... of the hot variety. So what happens when people in the crowd think it's "cute" to fill little Sprinkles with upwards of 20 Oscar-Meyer franks? Diarrhea. Bloody diarrhea up and down the court, coming from the ass-end of our whimpering starting center. Boys, think about what people would say if you left a trail of steaming brown fire behind you for thirty solid minutes during a game. Think of this and understand why Sprinkles has to go.

I now realize that it was wrong to remove Sprinkles from his native habitat and force him into this game of men. Which is why I've recruited a much smarter animal to pull this season out of the shitter. Boys, meet Defarge; he's a peregrine falcon, and our new point guard! Now, everyone grab a big leather glove out of that box over there, and let's play some basketball! Oh, and for the love of god, don't look that thing straight in the eye. Really sets him off.