With the continued release of DLC packs like Point Lookout alongside last week's sale on Steam which finally brought the game down to $25, the PC version of Fallout 3 is undergoing something of a resurgence. On our forum, lots of newcomers to the game have been asking which mods to install for their first playthrough.

There are thousands of mods out there, but only a few could be considered essential. If I had it to do all over again, this is what I would install to get the most out of the game the first time around.

Adds 300 radio stations to the too-quiet airwaves of Washington, D.C., of which 302 are dedicated to ranchero music. (Had to remove two of the main storyline's stations to make room)

Corrects the sloppy animations that Bethesda put in place for all models holding guns, replacing them with poses that accurately represent U.S. military training. All pistols are now held at a right angle, and all rifles are shot from the hip while screaming.

If you listen to anyone on any forum, Fallout 3 is extremely easy even on the hardest mode. Most people casually mention that they can beat the game without having to heal themselves once, without missing a single shot, and without having to rely on the training wheels provided by V.A.T.S. This mod brings the difficulty up to par by making every entity in the entire game aware of your exact location at all times and giving them all access to the game's debug console, from which they can type in a single command to kill you. 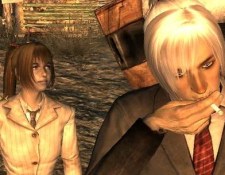 Every time your character completes a quest, a dialogue box will pop up describing the parallels between your actions and those of Harrison Ford's character in the classic film Firewall.

Allows you to target crotches in V.A.T.S., but as a tradeoff it does not allow you actually shoot.

Places all conent from mods that contain anime, nudity, and Warhammer into one in-game warehouse, which can be detonated with a nuclear bomb as an optional quest in Megaton.

Tired of seeing the same old enemies? This mod adds a procedural generator that places a mole at a random location on the face of every enemy you come across.

Play The Game As A Baby

Allows you to escape the vault in the character creation stage when your father momentarily steps out of the room. Your character has no skills or perks, no inventory, and travels much slower, but has a soft spot on the top of his head.

Can't get enough lockers? Love the hell out of desks, both upright and overturned? Not at all skeptical that raiders would have tons of blood-slick body parts strewn all over the place? This mod doubles the amount of lockers, desks, and unnecessary body parts in the game, quadrupling the amount of atmosphere in Fallout 3.

Blood Bowl
As violent as football is, I now realize it would be exponentially more disturbing with rat cheerleaders. 8/10

Call Of Juarez: Bound In Blood
Western-themed games are always disappointing, but this is the least disappointing. 7/10

Harry Potter And The Half-Blood Prince
I'd really lay into this abomination but I feel bad for any guy that has to lug around half his body weight in plasma. 5/10

Miami Law
Hubbs and Prockett always get their man - coming soon to a bargain bin near you! 3/10