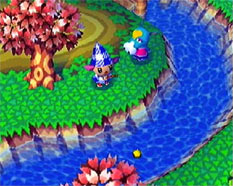 Yeah, I know, it looks too happy, and it is, but somehow happy overload works for "Animal Crossing".The console wars have been hot since Microsoft and Nintendo tried to challenge the dominance of Sony. While few doubt that for now their ventures have completely failed to unseat Sony from its number one spot, Microsoft and Nintendo continue to duke it out for second place. There's a certain undercurrent that whoever comes in third might not be around for the next generation of console releases. It happened with poor Sega, and no one wants to see their favorite console - be it the Game Cube or the Xbox - fail to come back for round two. Until about two weeks ago I was sure the Nintendo Game Cube was a piece of crap with no title on it that interested me in the slightest. Sure, the release of a Mario game touched a slight nostalgia nerve in me, but not exactly enough to get me to run out and buy a Game Cube.

With a little help from our good friends at Speakeasy whose ads you see everywhere, I got myself a free Xbox and I was happy. Don't get me wrong, the Xbox doesn't exactly have the Library of Alexandria going for it when it comes to game titles either, but games like Halo, Robotech: Battlecry (which will be coming out eventually on Game Cube too) and that upcoming Sexy Volleyball Game convinced me of its superiority. Besides, I'm a PC gamer, and Microsoft's Xbox is like the PC Console, or so my uninformed ass is content to assume anyway.

Then it happened. The buzz started on the forums for a game for Nintendo's Game Cube that was so utterly cute, ridiculous, and silly, that I simply had to have it. I read through page after page of messages from our goons raving about this title, with almost no one voicing negative opinions. Repeatedly I saw the same thing happening; people were breaking down the fan boy walls and buying a Game Cube just for this title. Xbox fans, Sony fans, they were all coming together over this one game. 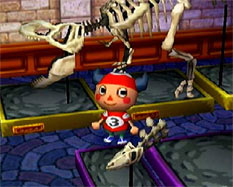 Make no mistake, this terror dungeon is actually a museum with each dinosaur skeleton donated by the horrifyingly adorable player.One look at a screen shot of the game is enough to make your teeth hurt for a week. Think of it as the Sims if it were made by the people who sell those collectible figurines of kids with puppies and balloons. It is so adorable it makes you want to jump out a window because you know you will never witness anything cuter for the rest of your life.

With the hearty approval of my girlfriend Michelle we decided to get a Game Cube and Animal Crossing. We researched the best ways to play the game together, how our towns would interact, when the best time of day was to catch fish and give them to the owl in the museum. Five minutes after I sat down to play any pretense of machismo I had evaporated as if I were rolling around on the floor with a baby, three puppies, and a kitten all at the same time.

For those of you not up on your extremely cutesy Game Cube games, Animal Crossing is a "real life" simulation with a cartoonish angle. You play a human that looks like a cross between a baby with hydrocephalus and a Raggedy Ann doll in a town full of talking animals. You have to raise money to expand your house and buy furnishings by doing things like picking fruit, digging for treasure, catching bugs (hot market, I know), and fishing. You interact with all the animal villagers in your town in a sometimes-logical way. Each has a distinct personality taken from an admittedly limited pool of personality types, and you can woo them into liking you by doing things like sending them presents and letters, or helping them out with menial tasks.

What the Sims got wrong in many ways Animal Crossing seems to get very right. The town you live in is much more fluid, with animals moving in and out at a sometimes ridiculous pace, and all kinds of timed events like sports contests and traveling merchants. The catch with Animal Crossing is that there is no fast forward button. For those of us who like our gaming fix quick and steady Animal Crossing can be a bit disconcerting. There's only so much you can do in a day, and even on the best days squeezing more than three hours out of the game starts to get boring. Then comes the next day and you fall in love all over again, with completely new and fun things to do, rumors and gossip, and seasonal events. Animal Crossing is the sort of game you would make fun of your friend for having and then obsessively play after he passes out from doing shots. 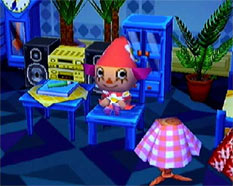 Hey, how about a hug? I need a fucking hug.My personal experience in Animal Crossing has been to create my rag-doll freakbaby named "sparkle" and send him off to his little town of "sassyton". Upon arriving in the cheery berg of sassyton I set up my home with the help of local shopkeeper Tom Nook. Tom Nook apparently has access to either dimensional gateways or illegal human raccoon-man cloning technology as he appears in every game under the same name. The trees on my town grow peaches, which I picked clean, only to discover that Tom Nook is only offering 100 bells (the cute Animal Crossing currency) for peaches, but 500 for every other fruit. When Michelle (AKA "fisty") made her town of "kittie" she discovered that her trees grew pears. Quickly a trade agreement was hammered out and we began taking the train between our towns to sell fruit at incredible markup in the nearby village.

Whenever you take a train ride in Animal Crossing you invariably encounter another character on the train. Usually this is a very emotive cat by the name of "Rover", who I have spoken with so many times I would like to gut with a meathook and sell to Tom Nook. You are also able to design your own clothing and decorations using a simple art tool built into the game. My efforts to emblazon my door with a swastika were shot down by Michelle, but I've had my mean fun with plenty of the townspeople. You see they enjoy getting letters and having you post bulletins on the bulletin board, but they can't actually understand what you write. They can tell when you write nonsense and they can comment on the length of your letter, but my repeated death threats and warnings about Tom Nook plotting to kill people have led to nothing but confusion and requests for shorter letters. Good old Tom once asked me to post an advertisement for his shop that would generate buzz and I proceeded to write a bulletin about Tom Nook's bedwetting problem. He congratulated me and paid me for a job well done.

That is by no means the limit of the fun things you can do around town to harass and provoke your saccharine townspeople. Try some of the following to see if you can get them to leave town:

Dig a network of trenches outside their home and write them a letter informing them that their grave awaits them. If you've caught a bee then attach it to the letter as a "gift".

Flowers can be trampled by repeatedly running or walking through them. Your house deserves to be the best one in town, don't let those showoffs think they can outdo you.

Contrary to their comments and what the manual and strategy guide might say, townspeople absolutely love being hit with the shovel and/or net. Run around and have a party with them seeing how many you can enrage.

If you have two memory cards chances are when someone moves out of your town they'll be moving into the town on the other card. That means they cannot escape your wrath. Hop on the train and continue the shenanigans in a neighboring town.

Whenever someone gives you a job to do what they're really saying is "take this and throw it in the wishing well". So when Grumbly the bear tells you to return his Gameboy to Portia, what he actually wants you to do is throw it down a well and go catch fish.

People in town enjoy playing with balls. If you see one having fun with a soccer ball then you should immediately kick the ball into the river or ocean.

When it starts to get late people tend to go into their houses to get ready for bed. If you see a house with the lights on then feel free to head on in uninvited and shove their furniture around enclosing them against the wall. If they're listening to music turn it off and if they have a toilet then use it repeatedly while they watch, trapped by the furniture, unable to stop your rampage.

I hope these tips help you become the man about town that sparkle is! Word about him is out and the buzz points to him being the next big thing.

Show Them What They Won

Hello, my name is Livestock and I'm being held against my will by Zack and Lowtax. They forced me at gun point to put together a new Photoshop Phriday, and so I had no choice but to comply. Please send help, for I have not experienced a real Friday since being kidnapped. Is Urkel still on? Truly, I await him as much as freedom! But enough about my misery! This week the Something Awful Goons got together and created some of the worst game show ideas since pretty much every game show currently on TV. 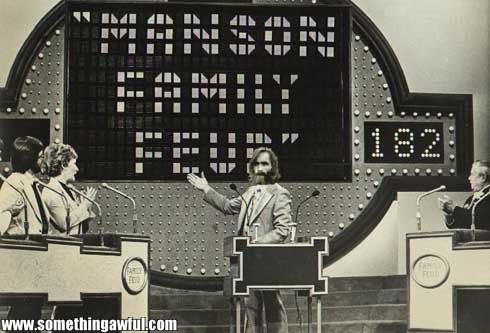 By all means click here and read the damn thing. I mean it!