Grab a Free Xbox or PS2!

Before starting today's award-winning update (it won the prestigious honor of being the "Article Most Likely to Never Be Read By Anybody Except the Author's Parents"), I'd like to point out that garish new ad I designed and shoved into the upper right hand corner. We here at Something Awful Headquarters, located above the majestic Mount Doom and surrounded by impenentrable lava streams, have recently met with the nice folks at Speakeasy.net and decided that their service would be of great interest to our viewers. They basically offer highspeed broadband service from many major US cities and offer the lowest gaming pings in the entire universe except for Mars, but that's just because Mars somehow invented Powerplay before big fatass Gabe Newell had a chance to develop it in between his pie binges.

Anyway, Speakeasy.net is currently offering a one-week promotional special where, if you sign up for their services, they'll give you a FREE XBOX or PS2! This is like a win-win situation for all involved; you get a console that will be online compatible, your pings drop like lead balloons, and you get a connection speed that's faster than Louie Anderson in a Sizzler's buffet. Now let me explain the only downsides to this deal: first off, Speakeasy.net is a bit more expensive than other DSL providers. This is because they are a dedicated gaming / high speed system and ensure that all your traffic goes through their own optimized servers and data centers. This special hardware and customer support costs more cash than a normal ISP, and their nonstop dedication to increasing your connection speed takes priority number one. Secondly, if you want a free Xbox or PS2, you'll have to sign up for a year of service. That isn't really a big deal since all DSL companies require the same type of contracts. I just wanted to get those two points out of the way.

As I mentioned before, these guys are top-notch and they have a stellar commitment to the hardcore gaming scene. Since they are all hardcore gamers and Internet users themselves, they understand your wants and needs. In addition, they will eventually begin providing supercool SA gaming servers run for goons, by goons, so all Speakeasy.net customers will get pings so low that they'll dip into negative values. That's correct; you'll be playing so fast you'll be TRAVELING BACK IN TIME! Wow! In addition, we'll eventually be offering webspace for SA / Speakeasy customers, allowing you to upload your Anime Cosplay DiVX clips and mp3s of "Golden Girls" at your leisure. Do us a favor and check out their special deals before the offer ends on September 30th:

Make a click and see if you can join our illustrious network of not-fat, not-ugly, not-afraid of communicating with humans, Something Awful Goons! Come on baby, you know you want to! 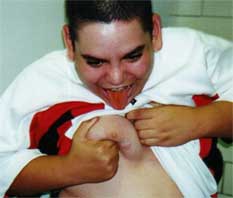 Kids today need to learn discipline, not whatever the fuck this is.

If you're like me, and I know I sure as hell am, you think rap music ranks up there with listening to a shirtless hobo beat a rusted water tank with a monkey wrench for nine hours straight. Now I know what all you pro-rap weedheads are going to tell me: "but Rich 'Lowtax' Kyanka, not all rap is bad! Like DJ Po-Po Skip Wrexor or MC Ceramic Dishtub, they're both highly talented individuals who can rhyme the word 'throw' with 'fist-fucking ho'!" To this I respond "shut up" in addition to "I hope your Eddie Bauer Ford Explorer with tinted windows vaporizes after driving into the back of an exploding cracker delivery truck." As anybody out there knows, I despise making sweeping generalizations, which is why I can safely say that any human who listens to rap music should be herded off into an active volcano which we would then launch into orbit and detonate with nuclear missiles.

Perhaps some of my assumptions regarding rap are way off-base here, but my previous experience with this "funky g-fresh hizza hozza" music has led be to believe rap music all contains the follow themes:

There are hardly any redeeming qualities in rap music (besides when the song finishes and reaches the two seconds of silence at the end), and this is particularly true with the newfangled "holy" rap music by such artists as "DC Talk" and "MC Good God!" Their music, inspired by the aforementioned lyrics, takes the overtly negative connotations found in generic rap and replaces it with positive, Christian values such as "dipping your baby's head in a wading pool of water." Here's an example of the previous rap lyrics "corrected" by an up and coming Christian rap band:

Unholy Catholic girl has walked out on me; now I will pray to Jesus and repent for my sins
My best friend decided to go to another church; now I shall cover his entire car with pamphlets from my church and harass him until he either comes back or dies
An unholy Catholic girl has decided to turn to the dark side and have filthy premarital sex with my lost ex-friend; I shall now pray for them. I pray that a plane falls on their home
My car is an economical Ford Golf; I respect the Police for enforcing our laws
I stay away from caffeine, sugar, cold medicine, and fast food and my favorite game is hopscotch. If I lose, I weep for hours upon hours, Jesus won't you save me?

As we can see, neither version of rap can be considered "good" or "decent enough to keep the listener from committing suicide." Naturally it struck me off guard when I found out that certain classrooms across the globe, classrooms that could be used to store radioactive canisters, are now teaching their students how to RAP. Yes, you read that correctly: HOW TO RAP.

Students Rapping Their Way To Better Grades - If you're a parent, it's not something you'd want to find out...that your child's reading skills are below average. At one Little Rock school, Mitchell Academy, only 12% of the kids are proficient in reading. That's according to the last benchmark test scores, and 80% of the reading exam involves writing. So, what could listening to rap and other music have to do with improving those scores? Well, Erik Cork wants students to do much more than talk about learning, he wants them to put their whole body into it. And, the kids seem to love it.

Now I don't want to sound like one of those whiny old-timers who sit around and moan while various appendages come loose and fall off, but in my day we didn't have any of this rapping bullshit. Do you know how we had to learn the ABC's? We had to memorize them and recite them to the teacher; if we missed one letter, they would use a redhot cattle prod to tattoo that letter on our testicles. They would also lock us in the "Geography Closet of Fun" which consisted of an abandoned refrigerator full of stones from various countries. The "Geography Closet of Fun" would then be kicked down a flight of stairs and we would then be expected to recite the location of every country ever (including Atlantis) under the threat of being drafted to the military in the "exploding student" Brigadoon. 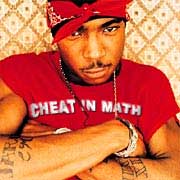 THIS IS NOT A MODEL FIGURE FOR OUR CHILDREN.

What I'm afraid is that this "school rap" acts as entrance drug to the seedy, illegal, filthy underworld of rap itself. At age six, your kid will be rapping about famous dead presidents and why counting to 10 is considered "dope." By age 10, he'll be doing freestyle on the Declaration of Independence. When he hits age 19, he'll have assassinated the Pope. That's the effect rap has on children and if you claim that this conclusion is false just because I made it up, I'll claim you're an idiot who obviously doesn't know what it takes to shoot the Pope.

First off, this article mentions that only 12% of their children are proficient in reading! Do you understand what this means? If you have 100 of those retards trapped inside a garage that had two exits, one marked "EXIT" and the other "INSTANT DEATH", that nearly 100% of them would instantly die do to the sarin gas we were pumping nonstop into the garage, with both exit doors welded shut? Those aren't very good statistics, especially when you figure in the fact that this supposedly "scientific test" has now been ruled "cruel and unusual punishment." We usually get off without being charged, as we explain these kids were doomed to live lives of rap-infested ghetto apartments where the phrase "duck and cover" refers to the procedure that should be taken after hearing a screeching police siren.

Now before I launch guns-blazing into this utterly retarded article, let's at least give them a chance to explain their complex and meaningful ways to educate our previously retarded kids and beat some sense into them, either be it through rap or small arms fire:

"Tell me more, tell me more, tell me more baby..", that's a lesson on elaboration. "You may not use the same words over and over..", this emphasizes varied word choice. And, "fact s...", this shows kids to pile good things into every sentence, like they would on a hamburger. "Teachers were skeptical that this would have any impact on classroom performance, but they're not skeptical anymore."

WHAT? I'm 26 years old and I can't even begin to figure out what the hell that nonsense is? Where are the bitch slapping's? Where are the TEK-9s? How are kids supposed to learn these important aspects of life when the rap has been so watered down that they're forced to repeat "tell me more baby" over and over again until it's recess time and they can go out and shoot up heroin out besides the monkey bars. How can these teachings help students deal in real world situations?

As you can see, this whole rapping thing can lead to nothing but pain, tears, paint, ears, and other horrible things. Please, school boards across America, do not let the rappers infiltrate your sacred halls of learning and corrupt it with the unholy word of rap! Let's keep the American educational system the way it is, with .04% of kids graduating and the other 99.96% going straightly to jail, where they belong. And while I'm at it, why doesn't somebody please bring back reruns of "Galaxy High School"?