Loving You Means Never Having to Say I Love You 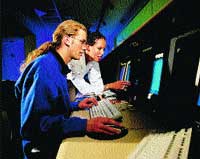 These two people have an excellent relationship, both freely expressing their wants and needs through the computer.

It's common knowledge that every relationship has its ups and downs. One day you and your significant other will be harmoniously celebrating something like the bombing of Iraq and the next day you'll be constantly bickering over who gets to use their playlist for Winamp (I do). Usually these domestic squabbles can be solved by sitting down and explaining your differences in a calm, rational manner that doesn't involve brandishing a loaded handgun. After 26 minutes have passed and you and your loved one have ironed out your differences, a list of credits will then scroll vertically in front of you and you'll suddenly become aware of who was the "key grip" and if your dispute was recorded in Dolby Surround Sound. These arguments are often exciting, enjoyable affairs, assuming the word "exciting" means "horrible" and "enjoyable" means "my god I want to beat myself into submission with a snow shovel." Oh yeah, and I guess the word "affairs" must mean something else now, so let's just substitute it with "invisible dump truck" and move on.

Many of you may not be aware of this, but there are many differences between men and women. For example, men have penises and women have, well, something really weird and different and unnecessarily complex. I would've also mentioned that women have breasts, but I've been recently unintentionally developing my own set of boobs. I'm not exactly sure why; I assume it's because I'm secretly afraid Emily's boobs might suddenly fail and I'd need an emergency backup set of boobs. She's going back to Wisconsin for awhile in the near future and I'm going to need something to point at and laugh or rely on as food lest there be a massive food shortage. All boob references aside, recently we had one of those "all out relationship brawls" which usually ends up with a fresh corpse being deposited underneath a popular city landfill. Not only were there corpses as a result of this but there is now one cat less in the house. One less alive cat. One less cat with a head or legs. NOTE TO READERS: This is a joke. We did not seriously kill one of our cats. PLEASE STOP EMAILING US ABOUT DEAD CATS.

Many couples don't tend to be as lucky in terms of resolving their differences smoothly. For example, there's this couple in Baltimore, Maryland who broke up. We're not going to concentrate on them though, as one member of the ex-couple was recently arrested for sexually assaulting a Ronald McDonald statue. The purpose of today's update is to help you, the reader, learn how to sustain a loving, caring, honest relationship based on lies and tricking the other person into thinking you're not nearly as sociopathic as you appear.

A MAN'S GUIDE TO A SUCCESSFUL RELATIONSHIP
By Rich "Lowtax" Kyanka 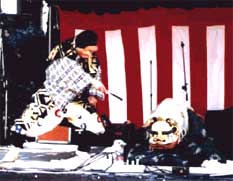 Yet another example of a great relationship, as these two are - wait a minute, WHAT THE FUCK IS GOING ON HERE?!?

Under no circumstances should you show any emotions. If you're emotional in any way, you run the risk of turning into a homosexual and then you'll have to spend a good majority of your paycheck on fruity, pink shirts with no top button. If your significant other expresses disdain for your stolid behavior, distract her by purchasing woman-themed gifts from Amazon.com such as a compressed air hose or a copy of "Hamburger Hill."

Never admit any personal shortcomings. Women will see this as a point of weakness and take advantage of this by constantly bringing it up and using it to attack you. For example, if you have Diabetes and get into an argument, your girlfriend will say things like "oh sure, that's EXACTLY what somebody with Diabetes would say!" or "why don't you shut up and go produce some insulin, Diabetes Boy!" If you slip up and accidentally admit a fault of your own, make sure to point out at least two faults of your significant other. This can range from "you never do the dishes" to "the gamma level on your monitor is too high."

The phrase "I love you" should never be used. It's automatically assumed that if you haven't broken up or given the other person a black eye yet, you love them. If you say "I love you," you might as well blurt out "please shove a New York Mets baseball helmet up my ass" because the end result will be about the same.

Men are naturally hunters and gatherers. This means that if your girlfriend is being attacked by a rabid pit bull, you should hunt down a decent life insurance policy and gather as much money as you can.

Women are of the weaker sex. You should exploit this by challenging your girlfriend or fiance to an arm wrestling competition whenever you get into an argument. The winner is declared "correct" and the loser is deemed "wrong." You may then proceed to do the Victory Dance, which involves demanding your significant other to mop the floor.

You should teach your girlfriend to not expect anything fancy or romantic early on in the relationship. Let's face it; romance is one of those fictional, make-believe type things that only appears in movies, just like Santa Claus or Santa Claus' shadow. On your first date, make sure to bluntly state, "okay toots, let's make one thing clear: there ain't gonna be none of that romantic shit in this here relationship." Then break a bottle over your head to show how serious you are. 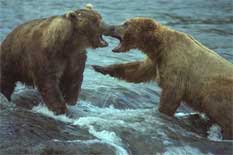 A whole bunch of newspapers covering the entire kitchen floor. This automatically cleans up any mess you may drop while preparing food and simultaneously provides you with humor from the award-winning comedy strip "Ziggy."

Food. They also like jewelry. Combine the two and give your significant other one of those candy rings that you can purchase at some of the more upscale roller skating rinks.

Attention. Purchase a spotlight and randomly turn it on, demanding that your girlfriend begin entertaining you. Feel free to shout "boo, get off the stage, you're not funny!" if she fails to do anything particularly amusing.

Anything that involves buying those "as seen on TV" gadgets such as "The Magical Food De-Re-Dehydrator," "Smilin' Joe's Happy Lip Gloss," or "Ron Popeil's Automatic Fornication Machine."

Screaming "OH MY GOD THE HOUSE IS ON FIRE!" at just about any time.

Tricking them into eating poop that looks like chocolate. I'm only assuming that makes women unhappy, as I haven't tried it... yet.

Traveling back in time and killing their parents so they don't give birth to them.

Occasionally your girlfriend's parents will object to your relationship and create difficulties between you and your loved one. Resolve this by driving a wedge between your girlfriend and her parents. Force her to choose you over them, at gunpoint if necessary. Repeatedly make comments such as, "oh, well I'm sorry YOUR DADDY told you that I shouldn't lock you in the closet" or "I guess YOUR MOMMY taught you it's wrong for me to have sex with other women in the same room as you."

There are many other relationship tips and techniques you can use to further your relationship but frankly I don't know what they are and I think they involve stealing construction equipment. Additionally, I don't want to freely give away these secret relationship pointers because I plan on writing a book entitled "You'll Love Me Even If It Kills You" which will be published entirely in 70-point bold font and span 900 pages. Then I will become rich and use my ill gotten gains to purchase happiness, something only money can do. I'll also use that money to write a follow up book called "How to Make Obscene Amounts of Money By Writing Stupid Relationship Books" and permanently change my last name to "PhD" so people will think I'm some kind of smart doctor guy. After all, what kind of successful relationship isn't based around deception and lies?

Zack "Gold Enumerator" Parsons here with an all new SA Story Time. This week we take a look at RPG based multi-volume fantasy epics. That's right Drangonlance nerds, I'm looking at you shitheads!

The king was very surprised, although he probably should not have been considering Skullulon had arisen from his thousand year torpor no less than five times in the last two years. Each time but one he had been vanquished by the great human hero Darestrong Stormheart. The fifth time a shipping mix-up at Skullulon’s office of evil conquest planning caused a thousand skull catapults to be shipped to The Island of Lost Hopes, prematurely ending that attempt at Skullulon’s domination of the Forgotten Worlds. Not that it really mattered; Darestrong would have thwarted him a fifth time. He was already questing and everything.

If you've ever read a novel based on a roleplaying game, or know someone who has, this should save you or them a lot of trouble in the near future. Head on over and give it a read!