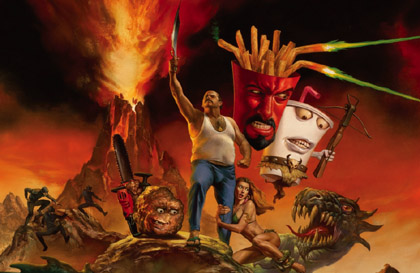 Despite the wishes of animation fans the world over, divine forces have not interrupted the production or distribution of the Aqua Teen Hunger Force movie. This was unfortunate for yours truly, as I was recently given a free ticket to this "film" by an Adult Swim publicity agent. Before I could tell them how laughable the fact is that the word "Cartoon" exists in the title of their network, I was off of the phone and my entire afternoon of watching my bootleg Augie Doggie and Doggie Daddy DVDs was ruined. As an animation historian, though, it is my responsibility to document the current downfall of the art (which started back in 1970, kids), so I hopped in my teal Lumina and headed down to the screening.

Let me first say that when I was growing up, there were a lot of kids on the marijuana, but I kept myself off of drugs throughout the 1970s by spending the entire decade petitioning movie theaters to show Ralph Bakshi films. While all of my efforts only led to the record two-week showing of Cool World in 1992, that's neither here nor there. It seems that these druggies have grown up and infiltrated our very own movie industry; and what's worse, their roach-clip scarred fingers are now in the animation pie, making it more rancid than ever. I knew my hypothesis was correct when two youths sat next to me, bumping my popcorn slightly and trying to correct their rudeness with a, "Sorry, dude." "Rock on," I said derisively, "Rock on." Then I noticed their long hair and vacant eyes - needless to say, I moved so I could sit all by myself (just the way I like it).

So what about the movie? Dear reader, my heart wept when I saw this travesty, which proceeded to wipe its feet all over what I have devoted my very life to. This "comedy" has not one speck of humor, that is, unless you find the antics of a talking milkshake "groovy." Or perhaps a mentally-challenged meatball makes your bong water boil? Whatever the case, the Aqua Teen Hunger Force movie can do nothing but hurt the art of animation. In an age when brilliant, traditionally animated films such as Romeo and Juliet: Sealed With a Kiss are lovingly crafted and released for the eyes of eager animation fans to devour, watching this perverted "animated" puppet show makes me want to burn my original Mighty Mouse prints, give up my affair with animation, roll some crack joints, and join the "stonerheads" who enjoy this garbage. Where were the vaudeville-style joke setups? Where were the animal characters based on famous comedians from 60 years ago? Why was it that not one pie was thrown? If this is comedy, I ain't laughin'.

Cartoon (and I use that term loosely) Network has received my letters over the past six years, so I'm more than certain they know how I feel about the Aqua Teen Hunger Force movie, as well as their entire Adult Swim lineup. Now it's your chance to show them just how you feel. If any of the 20 theaters this movie opens in are near you, just stay home and smoke a meth drug cigar. It'll be almost the same experience. 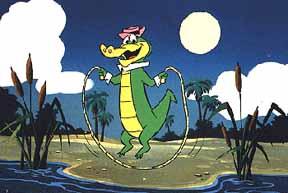 Yes, folks, you heard me. After 17 unsuccessful Internet petitions, three hunger strikes, and one suicide-by-cop, Time-Warner Home Video has finally listened to our pleas: Wally Gator is headed to DVD! This set will include all 427 Wally Gator shorts made between 1962 and mid-1963. I, for one, have fond memories of Wally Gator, not just as a relic of my childhood, but as an icon of the time when animation used to mean something. Sure, most of the episodes of Wally Gator were lacking in-betweens, many of them used jokes from older Hanna-Barbera 'toons, and some were even repainted segments of The Flintstones; but damnit, they were fun! Being the biggest Wally fan on my block, I can't wait for these puppies to hit my local Wal-Mart. Actually, all of this Wally hype makes me a little sad my record 18 years of dressing up as Wally Gator for Halloween didn't go on longer, just because a certain town's police force considers going out alone on Halloween "panhandling" if you do it after a certain age.

Yibba dibba dabba! Wally Gator is back, and he's brought along several hundred of his favorite adventures! Wally's the Yogi Bear of the swamp: stealing pies, running from authority figures, and even happening upon mischief now and then! In fact, if you squint, he looks kind of like a green Yogi Bear. Actually, we suggest that you do this!

Yes, the price is a little steep, but we do have to realize this is a niche market. However, once Wally Gator is out, there's no doubt that kids will drop their Transformers and Pokemon and cozy up to one of the greatest animated spectacles ever produced. People, we are *this close* to seeing a Secret Squirrel DVD set. Let's vote with our wallets on this one. 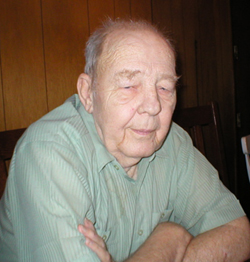 2007 has proven itself to be a dangerous year for animators from animation's Golden Age: Terp Henderson is the seventh casualty the animation industry has suffered in the month of April alone. There must be some kind of curse; that's the only way to explain this. All of these 100 year-old men dying can't just be a coincidence. We're just lucky that Terp's legacy will outlive his robust body.

Terp was born May 2nd, 1894 on a small Missouri mulch farm to his two impoverished parents. Ever the motivated worker, Terp took a job babysitting a young boy to help pay off his parents' growing debts. Luckily for Terp, this young boy happened to be Walt Disney himself. Lacking any form of modern entertainment, through the power of their imaginations Walt and Terp created characters such as Mickey Mouse, Donald Duck, and Krazy Kike, the last of which has sadly been whitewashed from history. Though these lovable characters were a far cry from their modern versions, and also made of mulch, Walt treasured his experiences wih Terp so much that he eventually turned their creations into studio-making successes when he moved to Hollywood in the 1920s. Terp eventually found out about this, and in 1929, caught the next trolley to Hollywood to confront his old friend. Here's Walt Disney's take on the matter in a 1966 interview from Leonard Maltin's book, Please Ask Me About Cartoons!

"So this fucker comes pounding on my door, yelling about how he saw our characters in a moving picture, and how he wanted money. Well, 'Fuck you," I says to him, and he storms off. So I go right back to my cocaine, when I'm interrupted five minutes later. Terp is back again, and he's got some slimy Jew with him. Fucking lawyers. He tells me I'm 'liable' and I tell him I've got a well for him to poision right here! [At this point, Walt Disney pointed to his asshole.] Then he tells me how much I could be sued for, and I give in. Country's run by fucking gypsies. I gave Terp some job painting cels in the basement of a opera hat factory. Fucker's still probably there now. What? I'm on my death bed, for fuck's sake!"

Though most of Terp's work has gone unseen by the public, he will mainly be remembered by the competent cel-painting on such Disney shorts as Trolley Follies, Clarabell Cow Eats a Straw Hat, Love that Horseless Carriage! and the canceled 1940 adaptation of Mein Kampf.