The next 50 years of Internet advertising

The Future of Internet Advertising

This is just one of the many wonderful images that cropped up when I did a Google search for "pain in the ass". I think it's a guy with his chin resting on a house made out of butter.Progress is everywhere. You remember back in the 1980s when companies first started making cell phones, but they were about the size of a cat that you feed too much and it has a gland disorder that makes it extra fat and it just lays around all the time being fat? Look at cell phones today! They are probably smaller than your wallet. In twenty more years cell phones will just be a cloud of microscopic robots that float around your head and transmit your voice to the moon.

Invention and progress do not necessarily equate to improvement though. Take for example the standard set by the online advertising industry. It started with banner ads, sidebar ads, text ads, small stuff that is only a minimal annoyance. Then it entered the realm of pop up ads that opened in new windows that you immediately closed out of frustration. Forward-thinking ad wizards then began to include script that would spawn new windows of advertising every time you closed one. These proved especially useful on pornographic and warez themed web sites, because advertisers consider them a prime demographic who loves to click the "x" button or hit Alt+F4 as quickly as humanly possible.

Trying for a less explosive but no less annoying approach, marketers then developed the "floating" advertisement. Usually animated, the ad would move around on a given page, sometimes accompanied by hideous caterwauling that made you want to puncture your eardrums with a hat pin. The most recent development in online advertising, according to c|net, comes courtesy of travel company Orbitz and Comet Systems - the makers of the second most annoying thing on the Internet; the Comet Cursor.

Comet will display fare information from Orbitz whenever a Comet cursor user is searching for fares at Orbitz competitors Travelocity and Expedia.

For example, if a Comet cursor user is comparing airfare for a flight from New York to Los Angeles on Travelocity, Comet's software will launch a search on Orbitz for the same flight and display Orbitz's fares next to Travelocity's.

Great! You can read about the whole annoying scheme here. About the only good thing I have to say about this idea is that it couldn't really be any more disgustingly painful or invasive than a regular Comet Cursor.

While this seems bad, I am not optimistic enough to think that it's the worst that advertisers can devise to torture us with. Maybe I'm a simpleton, but I still long for the days when an elderly announcer would say things like, "The Slippery Jack Happy Hour was brought to you by Boromelt, the only sandwich that contains liquid boron." That day is gone unfortunately, so I must look ahead to the future using my crystal ball of woefully inaccurate predictions to determine what tomorrow may hold. Without further ado, I bring you the next fifty years in online marketing.

Advances in mesmerism technology will permit the development of the dreaded Moaning Hypnotron Pop-up. A window will open when you go to a web site featuring this advertising technique. The window will lock up your system for three to ten minutes depending on your connection speed while it loads the proprietary Hypnotron Player. The Player will then display an animation of various hypnotically colored floating blocks while a recording of a woman moaning loops at maximum volume in the background. If you try to hit Alt+F4 or click the close window button it will bookmark the Hypnotron, set it as your homepage, and make it your wallpaper. In theory, it worked by hypnotizing viewers into submission, at which point Moaning Hypnotron scientists came over to their house and used a branding iron to stamp their advertising products into the user's skin. However, the Hypnotron ultimately fails when it is discovered it can only hypnotize you into being extremely angry at the makers of the Hypnotron. 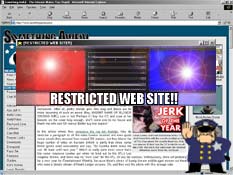 Browser Cop is like Bonzai Buddy's slightly more evil twin.Browser Cop is an invasive piece of software that installs on your system without prompting when you visit various web sites. After installation your computer will automatically restart. When you next browse the Internet a 3D rendered policeman will appear in the bottom right quadrant of your screen. Any time you visit a site other than those who paid to be added to the Browser Cop he will shout at you and threaten to write you a ticket. If you ignore Browser Cop he will issue onscreen citations that automatically deduct money from your bank account. Browser Cop is also tied into the Justice Department's database. Should you repeatedly refuse to acknowledge his commands he will falsify a criminal profile on you accusing you of being a child pornographer. To follow up, he will clandestinely download hundreds of images of child pornography into your browser cache and place an anonymous tip with the local authorities.

Microsoft's development of the revolutionary Fingerprint Mouse will be resisted by various organizations. Any time you use the mouse it will scan your finger prints and store them in Microsoft's "customer service database", ostensibly to provide you with better service. In reality it will all be done to appease Browser Cop, who needed fingerprints of non-criminals to be able to better falsify criminal profiles. He achieves this by blackmailing Bill Gates and other Microsoft executives by threatening to reveal their elaborate child pornography ring. Whenever you take your hand off the Fingerprint Mouse, Browser Cop will activate sirens located throughout your apartment or house and will yell at you to "stop loitering" or "get back here and quit taking pictures of those children!"

Catering to the needs of the online gambling industry, The Poker is an inexpensive hardware peripheral that doubles as a low quality scanner. Its real purpose is to support casino pop ups by heating up a coil within The Poker and stabbing you with it whenever a pop up appears while screaming "DRAAAAAAWWWW POKER!" and "BIG WINS AT SLOTS AND KINO!" It has a power cord that plugs into the wall but the stabbing/screaming mechanism runs off an internal battery to prevent people from avoiding stabbings by keeping it unplugged while browsing the Internet.

The eCoupons program will be initiated in 2020. By signing up for eCoupons you will receive a free eCoupon pocket device and a password to the eCoupon site, where you can download various discounts for groceries and plane tickets. You can then take the pocket device into a retailer and show them the coupons to receive the discount. While good in theory the pocket device rarely work. Also, only Petsmart and Waldenbooks accept eCoupons, neither of which sells groceries or plane tickets. 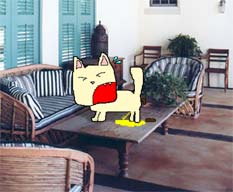 That darn cat!Developed by an advanced psychological marketing team working with Sony, the Freakish Screeching Japanese Cat Character That Shits and Pisses All Over Your House (or FSJCCTSPAOYH for short) is a cartoon cat that emerges from your computer and runs around your house constantly screeching, urinating, and defecating. It is impossible to uninstall this cat as it somehow physically manifests in your house. The purpose of it is to record your reactions and transmit them into a "consumer profile" used by the Sony Corporation to produce demographic targeted mass mailers. The only way to stop the cat is to either destroy your computer completely or cut the cat's head off and bury it under salt, burn its body, and scatter the ashes in running water.

The sheer amount of obsolete computer hardware around in the mid 21st century prompts the formation of the non-profit organization iDiets. Founded by Korean dietician Dr. Lee Jong, the program determines the caloric value of various pieces of computer hardware and creates a "desired weight menu" for registered users. Scandal brings an end to iDiets when it is uncovered that it is simply a scheme by Korean fertilizer company Shit Heroes Inc. to convince fat Americans to turn their useless old computers into nutrient rich topsoil. Not only that, but 32 and 64 bit sound cards are high in fat and full of empty MIDI calories, making them a terrible addition to a weight loss plan.

No, I don't mean heavy metal music; the Iron Maiden is the ultimate evolution in online marketing. When you visit a web site that is running the Iron Maiden ad campaign your signal will be locked in place and you will be unable to navigate out of the site. Flames will engulf your feet, roasting them with agonizing slowness while a grating metallic voice repeatedly says the name and slogan of a product. Needles will stab into your genitals and other nerve points and a hot brand will burn the company's logo into your chest.

I guess the future looks pretty bleak, but it beats the apocalypse that shithead Nostradamus was always talking about. Wait, no it doesn't! God, please bring down the Rapture, spare me the agony of one more Comet Cursor!

Everyone's favorite hateful ogre of a friend down the road has updated his site once again! 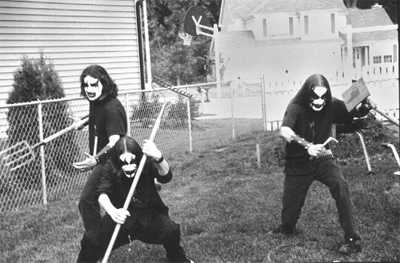 The one and only Gothic Garden Service. They're the "one and only" because I used all the other ones throat's to shoot out fireworks for the 4th of July. After I got done shooting off the fireworks, I tried to cook some ribs on my grill but I accidentally put it on an uneven surface so it started rolling down the hill and it hit Gary Mentez's boat and caught it on fire. I tried to put out the fire by breaking a bottle of gin over Gary's face, but that didn't work so I had to settle for taking his dartboard and going to sleep in my garage.

He is definitely going to hurt me really badly if you don't go read it now!

Feeling the need to set the record straight about how to please that special woman in your life, I put together a little informational piece.

I like to hang out in the women's restroom at Applebee's and just lean casually against the tampon machine, let women know I'm comfortable with myself and with them. They always give me the eye when they walk past and I'm all "what's up baby?" Then when they're done with their business I'll try and chat them up. Sometimes the Applebee's employees run me out or call the cops, but I think that's just because they don't like the competition.

I hardly know how to unhook a woman's bra, but I think that's qualification enough for me to ruin your love life!