What's Going On In This Atari 2600/Intellivision Screenshot? 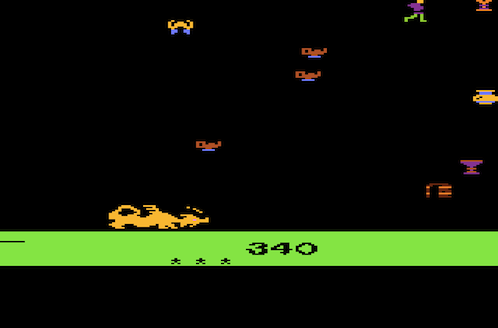 In the upper right corner, we see an escape artist plummeting to his death while attempting to free himself from a straight jacket. It's likely that his act began in a birthday party on the rooftop of a pottery store, as the objects below him and to his right appear to be chalices, a vase, and a three-layer chocolate cake with one slice removed.

Three magical lamps are levitating in the center of the screen. No explanation is needed there, as this was a common theme in all games released in the 70's and early 80's. Up a bit and to the left, a rotund man curses the gods for his garish skin pigmentation and concave crotch.

Below, three men (presumably the owners of the lamps) cross 340th street to assist the player's character, which is an abnormally large golden retriever suffering from Spina Bifida.

This is simply chilling. How could a programmer so accurately portray the Tiger Woods scandal nearly thirty years before it happened? 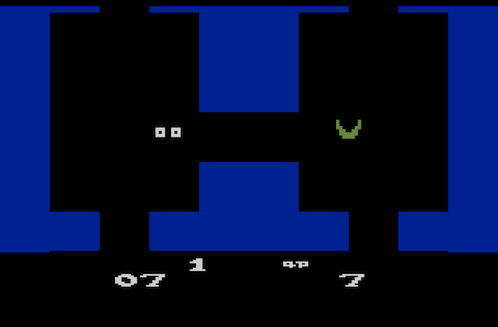 Here, conjoined twins consider their lot in life. The one on the left was lucky enough to be born with eyes, but the one on the right was born with a boomerang. Each of them get 7 points, but boomerang twin doesn't need a 0 before his score to make him feel better because he has clearly won this round of genetic craps. 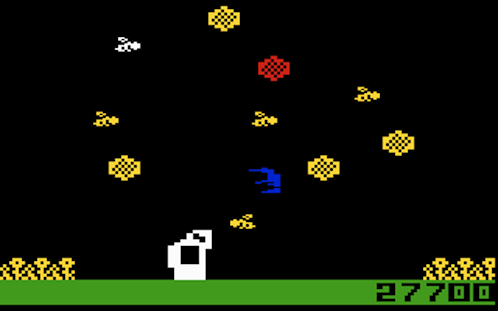 Squid ghost screams in horror. All of his nightmares have come true. The waffles are swarming. Enormous bees have accompanied them. A miniature blue elephant has turned on its side and begun an eerily casual vertical descent.

Among occasions that call for panicked flight, this certainly tops the list. Unfortunately, squid ghost is hedged in one all sides by chicken embryos. 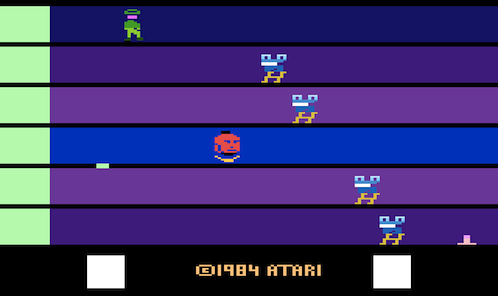 This appears to be an olympic track event of some sort. In last place is Pimp Soldier, held back as usual by his carefully choreographed casual strut. Really, it's amazing that he qualifies as often as he does.

The decapitated head of Zangief is in fifth place, seemingly satisfied with outpacing a competitor with legs.

As usual, the first four spots go to the athletes from Director Chairvania, the tiny nation known primarily for exporting oversized googley eyes. 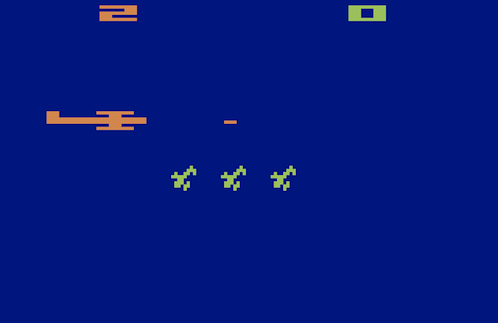 Three more magic teapots in midair. This time around, they're hoping to avoid being rubbed by a giant arm with an overly elaborate watch, which would totally scuff up their polish.

I'll fess up. I got that one so quickly because I'm fairly sure I played the game before. Wasn't it the adaptation of Rambo? 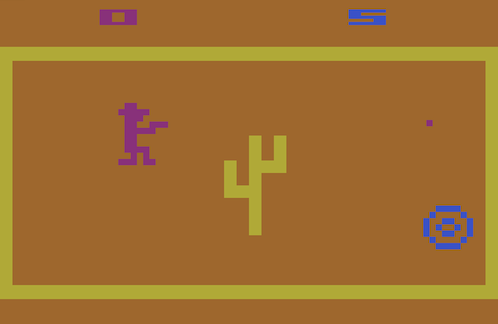 Here, the world's worst cowboy completely misses his target. The cowboy is the yellow thing in the middle, and the target he's trying to kick is off screen.

See the purple figure to the left? The counter up above indicates that there are zero of him, while the blue counter tells us that there are five tires. I can only see one, but I was never good at these hidden object games. 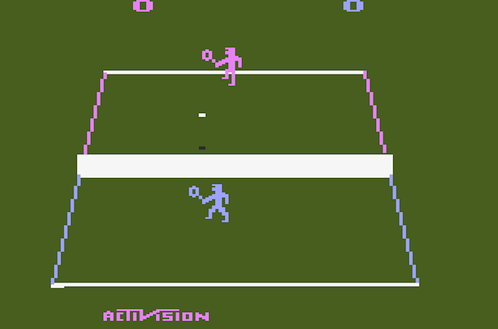 Jeez. The other screenshots made vague attempts to resemble actual things, but all I see in this one is nonsense. I have no idea. If I had to venture a guess, I'd say this is either the Donkey Kong glitch screen or some sort of early digital version of the Rorschach test. 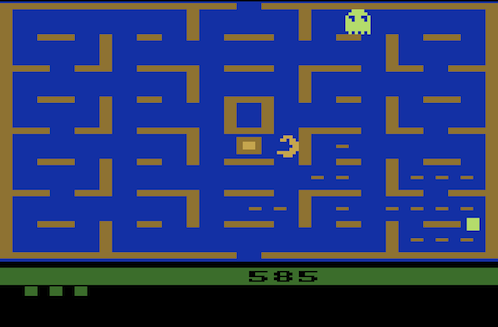 Easy. Here, some sort of space ship is spinning around, frantically blasting away at clusters of incoming asteroids.