[Mature] Exalted's Most Mature Content (A Mature Article) for Matures Only

Has your group been looking for the right role playing system that will let you incorporate rape into your tabletop game? Your search is over! Exalted, a "mature" game from White Wolf, and now Onyx Path, has exciting new ways to make the atmosphere around your gaming table oppressively awkward. Do you like "mature" things like pictures of vinyl nuns with their boobs all over the place and lots of sex-themed magic? How about comics featuring child rape? What would your group think of the new Exalted Kickstarter that includes magic rape powers? Pretty cool! Pretty "mature"! Fun way to spend a Saturday with the guys in your kitchen? Steve and Zack take a horror show tour of Exalted's many "mature" subjects. 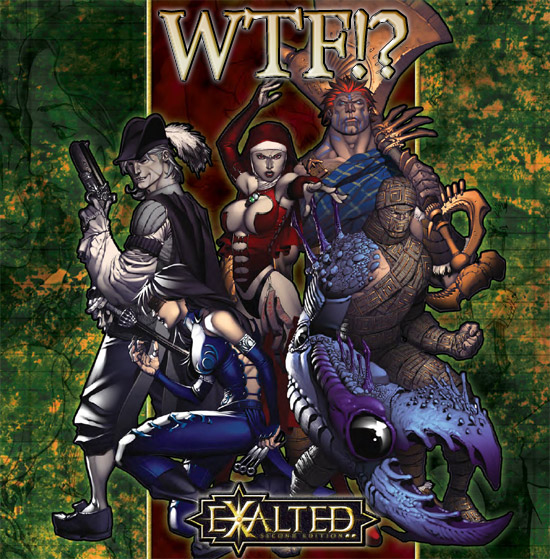 Steve: Where do we start on this one? Have you ever played Exalted?

Zack: No. Never even looked at an Exalted book until this article.

Steve: I have played it. It's pretty awesome. Wanted to get that out of the way right up front.

Steve: Most of the stupid World of Darkness games cratered horribly with the 21st century reboot, but Exalted was bad ass. It was like fantasy RPG without any Tolkein. It incorporated everything from Chinese and Japanese mythologies to H.P. Lovecraft stuff. And I am cool with all the boobs. Some of the other stuff, not so cool with.

Zack: The stuff you're not cool with is probably a good starting point. Let's dive into the latest Kickstarter drama.

Zack: Yeah. Bear with us, this bit will take some explaining. Then it's on to the "fun" stuff.

Zack: Exalted has had a fair amount of criticism about its sexual content over the years, so when Onyx Path announced they would be authoring a 3rd Edition version of the game people a lot of fans were hoping the core game would be tightened up and the writers would introduce new ideas and shed some of Exalted's more repulsive content. Signs seemed good on the Kickstarter page. Early updates included well-received ideas.

Steve: Then came the rape ghosts.

Zack: The May 27th update included a PDF preview of the Abyssals, think demonic characters, although that's not exactly right. Evil dudes. And one of their power groups was something like a succubus that could sexually enslave people against their will. Some of the powers within this group were deemed offensive:

Zack: Don't get lost in the RPGese on that. The implications of the whole group pointed towards game sessions where players would be sexually dominating NPCs and potentially other players and having sex with them until they became ghosts.

Steve: Everybody is all upset about rape all the time now.

Zack: Is that a defense?

Steve: No, dude. No way. But, like, they should have known better.

Zack: Should have, but didn't. And one of the authors of this PDF took to our forums and tried to defend it by saying things like this:

Zack: You can guess at the shit tsunami this sort of attitude created. Many SA posters pointed out that they could have done a very similar power, but should have left the sort of manipulation more ambiguous. You could be raping people, if that was your gross thing, but you could also be withholding affection or using gifts to manipulate them or a hundred other methods.

Zack: Yeah, as was pointed out:

Steve: But Holden apologized and everything was right.

Zack: Yes. He gave an impressive apology that seemed like he got the complaints and agreed with them. There was word that other writers working on the project were similarly disturbed and wanted things changed.

Steve: So all was right in the world?

Zack: Until the next Kickstarter update. They blew the damage control by pulling a "poor wording" apology, which they proceeded to undermine by reiterating the whole intent of their "mature" rape powers.

Steve: You know you have problems with your product when you have to utter the phrase: "Those apparitions are not for rape. They are for haunting, and seduction."

Zack: So that is the current situation with Exalted. The game with new rape powers has raised almost half a million dollars. Steve and I both hope that wiser voices prevail and the new game leaves the choices about how "mature" to be in the hands of the players rather than spelled out in puerile detail in the book.

Steve: Can't we cut these guys and gals some slack?

Zack: No, dummy, that's the whole point of this article. They have a track record of this crap.

Steve: Okay, right, but just, before we go on, I want to say again: Exalted is a pretty boss game. It is fun.

Zack: And what the hobby needs more of are apparitions that are definitely not for rape.

Steve: They're for haunting.