Back to the Future! 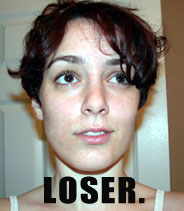 I am a shiftless bum.

One of the most difficult things for me to do is plan a viable future for myself, one in which I am socially acceptable and make money all at the same time. I recently quit school after deciding that until I actually figure out what it is that I truly enjoy, I shouldn't be taking classes and wasting time and money. This is because it would be time that I could be spending on playing Everquest and money that I could be spending on backup copies of Everquest. Up until fairly recently, the plan was to go through with medical school and become a doctor, but then I realized that I really just hate people, so that probably wouldn't have worked out so well. I got a bachelor's degree in English, of all things, but that's pretty useless in today's world unless you want to use it to teach people who don't know English because they come from Ethnia where people speak in some sort of bong-bong language. And that brings us back once again to my not wanting to do that because I hate people. I suppose I could also write angsty poetry about how the world is black like my black, black heart, but I shouldn't do that until I get my webcam and Amazon wishlist set up properly.

The thing is, there are very few pastimes that I actually enjoy enough to make them a career, which causes a problem when it comes down to employment and furthering of education. Unfortunately there are few places that will pay me to play video games and even fewer who will pay me to write horrible things that sometimes concern video games, so for now I am just sort of treading water in that big future-related ocean in the sky (where "the sky" is actually in Seattle). In the mean time, I have been learning a little about life, a little about love, and maybe even a little about myself, but I do think that one of these days I am going to have to just pick something already so that my parents will be able to sleep at night without having blissful dreams of my violent death by bus-smashing.

And this brings us to the wide world of organized crime. Yes, the Mafia. Sure, I'm not Italian, but I like pasta and pizza, so that's at least a step in the right direction, I figure. In a lot of ways the Mafia would be perfect for me as a career choice, but mainly, the Mafia is just plain neat: 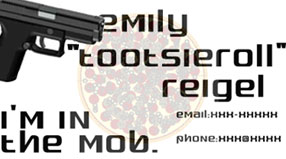 I'd get to have neat-o business cards!

I would get a cool nickname such as "No Ass" or "Joey Joey Joe Joe" or "Crazyfingers."

I would get kissed a lot on the cheeks by swarthy men named "Vinnie," "Guido," or "Mobby."

Years after my death someone would write a groundbreaking exposé about me, highlighting the time when I was 12 and one of my goldfish was brutally flushed.

I could say really neat catchphrases like, "You'll be sleeping with the fishes" and "We'll give you a pair of cement slippers" and people will finally take me seriously.

The downside to the whole things is that I am female, and last I checked they don't allow girls into the Mafia. Sure, I could always just be someone's moll and rely on my man to supply me with furs and expensive jewels and liquor, but that's boring and I'd still want to play video games instead. Plus, knowing me I would make some sort of mistake involving a card game or the police or something and then I would be casually shot in the head in under a week's time. I could just do that myself right now without all of the hassle, so what's the point? I guess the mob biz is trickier than it would first appear .

Another option is that I become a professional fat person. This may sound easy enough, but believe me, it's a tough job full of hazardous traps and dangerous intrigue. It does have some hefty benefits, however. Get it? Hefty? AHAHAHAHAHAHA! HEFTY!! HAHAHAHAHA!!!! Whew. Anyway, some of those benefits include: 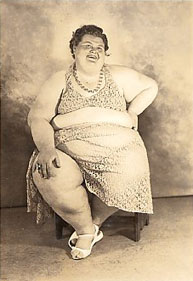 No one expects anything of you because you're just too damn fat to do anything, period.

You don't have to worry about dealing with people because you're so damn fat they just avoid you at all costs, anyway.

You can go on disability because you're so damn fat and need one of those little motorized cart-things to get around.

You can spend your days sighing mournfully and playing video games and eating ice cream and no one will think twice because that's what you are supposed to do due to your being so damn fat.

It's easy to keep warm in the wintertime (so damn fat, etc).

If someone accuses you of being so damn fat and lazy, you can just say that you are preggo.

Unfortunately, being fat also has that whole "heart attack before age 35" thing associated with it, and I intend to be in this world for as long as possible so as to inflict as much damage upon the unwitting population as poss--er, I mean, to spread love and happiness all over the world. So I'm not sure I'm interested in that aspect of fattitude. It also creates problems when you have to start special-ordering clothing because only tents and mumus fit your massive, whale-like bulk.

A third and probably the most viable option for me is that of being der Kommissar from Falco's smash 80's hit, "Der Kommissar." As the song implies, you shuld not turn around (uh oh!) because the Kommissar is in fact, in town. This seems like a good career path to follow because I tend to sneak up behind people on a regular basis. I am not really German, but I like sausages so that is probably close enough.

Now I can go to school to learn many different ways to interpret these cryptic lyrics about myself. I consider this a worthy goal, certainly better than playing video games all day or being a doctor, of all things. There has to be a school someplace with a class on Falco lyrics. After all, this is America.