How To Make Someone Cry

I don't think I've ever made anyone cry. Little kids maybe, but they cry at pretty much everything, so they don't count. It's too bad because I've always wanted to make someone cry. I'm not strong, so I don't think I could do it physically, so that leaves me only a few options. 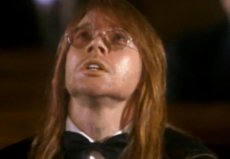 Guns N' Roses wrote a song called "Don't Cry" that's intended to make people listening to it not cry. As far as I know it works, because when I play it to people in my car, they never cry. In fact some get angry and try to eject the cassette, which is like the opposite of crying.

If I could find whatever principle the song is based on and reverse it, I could make a song that makes people cry. Of course this sort of reverse-engineering borders on copyright infringement, so there's a chance Axl Rose might try to jump me.

I'd also have to find a popular singer to record the song, someone with no integrity who'll do pretty much anything if you give them a big bag of money. That shouldn't be a problem though.

There's a popular saying that goes "If I don't laugh, I'll cry." Assuming this statement is true, it's impossible not to cry if deprived of laughter, as shown by this truth table:

So to make someone cry, all I'd have to do is keep them from laughing for an indeterminate period of time. Maybe I could show them the DVD Funny Games, which despite its title isn't very funny at all, unless you consider a thin piece of optically clear plastic under a layer of silvered metal with additives that cause it to discolor when exposed to laser light funny.

Apparently there's a game called "Devil May Cry." I don't know anything about it since I stopped playing games in 2004, but it seems to me like anything with the potential to make the devil cry would definitely work on mere mortals. Judging by the game's trailer the source of the devil's tears is effeminate men in capes, so maybe if I wore a cape and ran around someone's living room they'd start weeping violently. 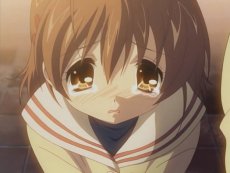 Maybe I could convince someone that crying is a good thing. Some therapists advocate crying, so it's possible. But to me the whole point of making someone cry is that it's against their will, not just through trickery. Of course, once I revealed to the person that I tricked them they might cry for real, so then it would count I guess.

My last option is to just make someone look like they're crying. I could pour water into their eyes, record it, and play it in reverse. This is technically cheating, but on the plus side I'd have a video I could post on youtube that would make everyone think I made someone cry. I could even set it to "Cryin' like a Bitch!" by Godsmack, and then in the description suggest that the person should be the new guitarist of Godsmack, except they'd have to use the wa-wa pedal a lot.

You know, now that I think about it, I'm not sure why I'm so obsessed with making people cry. Maybe it's a projection of the fact that I want to cry sometimes. That would actually make a lot of sense. So now that I'm done with this article ... I think I'm going to cry.