This Holy Night We Flood the World with Bees! 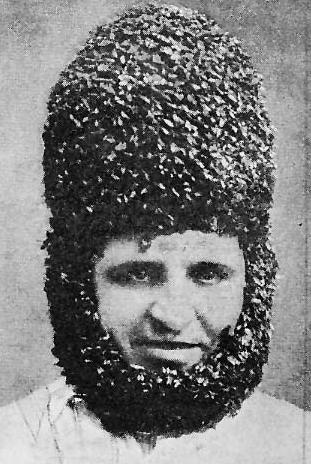 At Something Awful, we're big proponents of giving things to people. One time, Zack Parsons spearheaded some thing where people bought body armor for soldiers in Iraq, or maybe I'm just thinking of one of his gay GI Joe articles or something. Then there was the time when Richard "Lowtax" Kyanka solicited donations from Something Awful members to help victims of Hurricane Katrina. That was pretty nice, until PayPal put the no-no on the whole affair due to their strictly enforced policy of "for some reason."

It's time to start your charity motors once again, goons. I know you're busy sucking down sugarplums and unwrapping nostril groomers (hint hint) from your girlfriend, but I'd like you to take a moment out of your holiday routine to remind you of something more important: all over the world, people are dying miserably because of your greed. Right now, even as you're reading this, some child with a giant head and what seems like an abnormal number of ribs is far along in the process of dying of poorness. You know that Battlestar Galactica bathrobe you bought for your brother? If you had used just one tenth of that money to buy this little third-world moppet a salt lick or a couple fingers of gruel, he'd be not dying right at this instant.

Sorry if I'm bumming you out, but I have good news: with just a small contribution, you can help! Well, you can't help the kid from the previous paragraph. That kid is dead now, so forget about him. He died because you were reading a comedy website instead of sending him money. That's fine, though. There are plenty more dying people to help, so let's get on with it before-- oh, whoops, another one just died.

You may have heard of Heifer International, a charitable organization that improves the lives of poor people around the world by giving them goats and cows and stuff, which they can milk or eat or cut open and crawl inside of for warmth. One of their many animal-charity drives involves setting up bee colonies, which seems like the perfect project to throw our money at.

The beauty of donating bees is that it works whether you're good or evil. There are two ways to look at it:

A) You are paying $30 to help a family increase their crop yields and earn extra income through the magic of pollination.

B) You are paying $30 to prank the fuck out of some poor people by foisting a swarm of angry bees on them.

Bee-giving is good for the world, but you can feel like an asshole while doing it. In fact, you can feel like a supervillain. Each $30 bee contribution buys 12,500 bees (I actually called and checked), which means that the combined weight of Awful charity could potentially flood the developing world with millions of bees. On this holiest of nights, we shall darken the skies of the world's poorest nations with deadly swarms of nature's perfect killing machine.

To participate in our charity bee drive, just follow these easy steps:

1. Visit this page to order bees directly from Heifer International.

3. After you enter your info, you'll see an "Additional Information" area. In the second dropdown menu, select "Other Organization," then enter "Something Awful" in the text field below it.

Let's forever end poverty everywhere in the world through the miraculous power of bees! Or, if you're evil, let's cause thousands of potentially fatal bee stings in the countries whose medical care systems are least qualified to treat allergic shock!