Comics are capable of combining visuals, prose, and pacing to engage us in a way that is wholly different from books and film. They are also capable of showing angry men and women pose at one another, stretching two pages worth of needlessly gloomy dialog into thirty pages.

This series is an attempt to channel my fondness for good and bad comics alike, to explore the most pressing topics in comics through informative and thought-provoking journalism. Or it is about guys with large heads and anything else that strikes me as funny. If you feel compelled to pick up a book or two, each installment of Know Your Comics will end with a recommended title.

I do not claim to be a comic book expert, but I do imply it and ask that you treat my words with all the respect that such a lofty title commands.

Superhero comics are largely populated by pretty people with grotesquely perfect bodies, by war robots and supernatural beings whose figures were sculpted for the sole purpose of combative flexing. Rarely do we consider the plight of the noble big-headed doofus.

Think, for a moment, about the poor creature who is so dang smart that his enormous cranium makes button-up shirts a necessity. The man who rarely bothers to make facial expressions, for his most intense look of hatred or ecstasy would only cover one eighth of his face. Consider what it is to be doomed to a life without proper motorcycle safety. 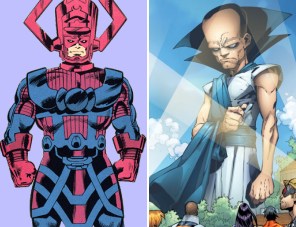 Galactus, The WatcherSometimes a head is large because it is attached to a god. Such is the case with Galactus. Portrayed in that Fantastic Four movie as a sentient CGI cloud (???), he is in fact a big old humanoid entity that eats planets. In spite of such an indiscriminate diet he's surprisingly svelte, though all those calories unfortunately go straight to his cylindrical head.

It's difficult to gauge precisely how much of his excess head is dedicated to fat storage and how much is smarts. After all, you wouldn't think that being an intergalactic hungry hungry hippo would require much brainpower. On the other hand, you have to be savvy to go around wearing that hat for countless millennia without getting beat up.

Occasionally a big head is dedicated to storage. The Watcher is Marvel's most enigmatic figure, silently observing Earth's history and filing everything away in that big beautiful brain.

Forbidden from interfering with events in any way, he mostly stands around while everyone does their best to ignore him. In many ways he is like me at a party, minus the armpit sweat and self-consciousness about whether his hands should hang at his sides or go in his pockets.

When The Watcher shows up, it usually means something momentous is about to happen. This can be good, like if you're walking into a Mexican restaurant when he arrives then chances are you're about to eat a burrito of historically significant flavor. More likely than not, however his presence comes before something terrible like an alien invasion or a screening of Bending The Rules. 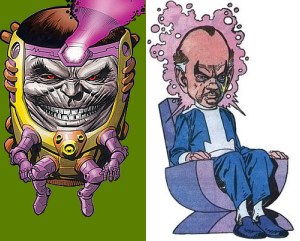 M.O.D.O.K., Hector HammondIn a few unfortunate cases, an enormous head is pretty much all someone has. For example, take M.O.D.O.K., an exceptionally angry guy whose origin actually involves something called the Cosmic Cube. That's enough to make anyone grumpy, but having a name that's an acronym for Mobile Organism Design Only for Killing and being stuck with an enormous skull for a torso? Fuel for eternal rage, right there.

If you value your sanity, do not even begin to contemplate M.O.D.O.K.'s physiology. Is there just an enormous brain in there, with no other organs? He comes across as more impotently angry than smart, so I doubt it. Maybe he has a full set of organs where the enormous brain would usually go, and a normal brain encased in a smaller skull just behind his nasal cavities?

Sometimes a head needs to mutate like Hector Hammond's, to expand under the pressure of both a growing intellect and burgeoning psychic abilities. While Marvel seems to have an embarrassment of riches when it comes to flamboyant big-heads, Hammond is a DC villain and he seems to have the hardest time with his cranial lot in life.

In spite of his powers, Hector Hammond is remarkably lame. He has no alias. He's in denial about his male pattern baldness. Relatively normal clothes hang from an atrophied body that, when combined with a truly massive head, makes him indistinguishable from a ventriloquist's dummy.

There are, of course, many more characters with big heads, from the Hulk's enemy Leader (a green goofball that presumably gets smarter the angrier he gets) to Karnak (a kung fu dude that attempts to draw attention away from his dome with a tribal tattoo on his forehead). These disparate heads were forged by different circumstances, but they all share a similar burden. 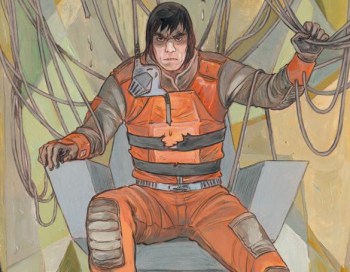 Most of the story is implied through visuals and incidental dialog, punctuated by sudden acts of casual violence that feel appropriately jarring rather than flashy. Even with relatively few words, the first two issues have felt more meaty than entire runs of most comics I've read recently.

The comic began life as a Rob Liefeld superhero book in the 90s, but was recently relaunched with Brandon Graham as the writer alongside artist Simon Roy. You'll want to start with Prophet #21, which is where this new team comes on board.