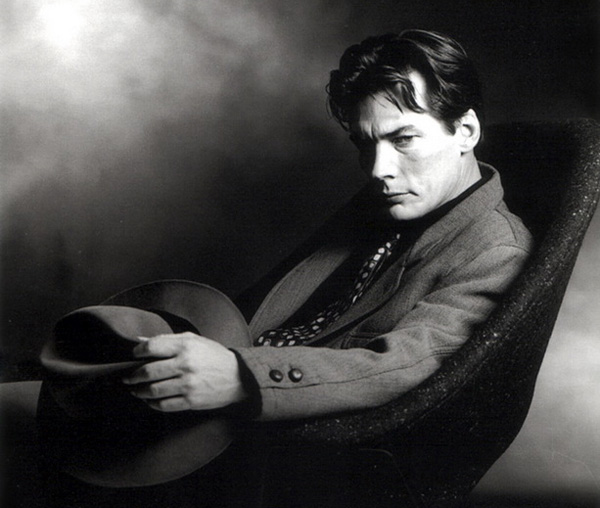 Billy Drago is perhaps the finest stock lunatic of the VHS era. Maybe you don't know his name, but if you fall squarely in the Something Awful demographic, you've seen his face dozens of times, portraying a variety of leering lunatics, insane preachers and unhinged crime bosses. He's had roles in some above-ground releases, like The Untouchables, The X-Files and, uh, Brisco County Jr., though his finest material has always been in the straight-to-video gutters, playing against the Jeff Faheys and Bruce Boxleitners of the world. Down there, his roles are bigger and his creepiness is broader. This is the Billy Drago we love best.
Roger Ebert once said that no movie featuring Harry Dean Stanton could be altogether bad. It would be nice to say the same of Billy Drago, but it would miss the point of his genius; he's been in a lot of genuine shit. But if you're going to watch a movie that's altogether bad, make sure it has Billy Drago in it-- it sure as hell can't be altogether boring. I've rented watched quite a few movies on the strength of his name alone, and I always get what I paid for.
I certainly haven't seen every Billy Drago film, and I don't know enough about him to pen the ultimate thesis on the Drago oeuvre. Maybe in a few years. But, for now, I hope this brief and inadequate appreciation will put a name to the face and inspire some casual fans to dig deeper.

Here's a fantastic example of the unique charm Billy Drago can bring to practically any role you throw at him. Here we have the introduction to what I gather is a VHS acting workshop presented by his wife, fellow TV/B-movie regular Silviana Gallardo:
(A link, just in case the embed doesn't work in your browser.)
No other actor could bring this level of wild-eyed, totally unnecessary menace to a video acting lesson intro. Was it an artistic choice to play it like the chilling confession of a serial child murderer, or is it just Billy Drago being Billy Drago?

2. The Names of Drago

I hope I haven't made it seem like Billy Drago is lacking in versatility. On the contrary, he's played every stripe of lowlife, from island-owning kingpin to ethnic heavy to unnamed thug. The best introduction to Billy Drago's career might not even involve watching a movie-- to get a good sense of his work, you can just open his IMDB page and read the names of every character he's played. Career phases come and go; strange patterns emerge.

3. A Man and His Islands

For the finest in Drago, turn to Death Ring (1992) and Deadly Heroes (1993)-- the height of the Billy Drago island kingpin/rapist psychopath era.
Death Ring's cover promises an action dream team: NORRIS. MCQUEEN. SWAYZE. Can you even believe that lineup? Well, it's true: Mike Norris, Don Swayze and Chad McQueen come together for an almost-star studded cinematic spectacular. In Death Ring, Billy Drago is a psychopath who owns an island, and the ragtag band of famous brothers (and a son) must infiltrate his compound to save a captive woman from being malignantly pawed at. 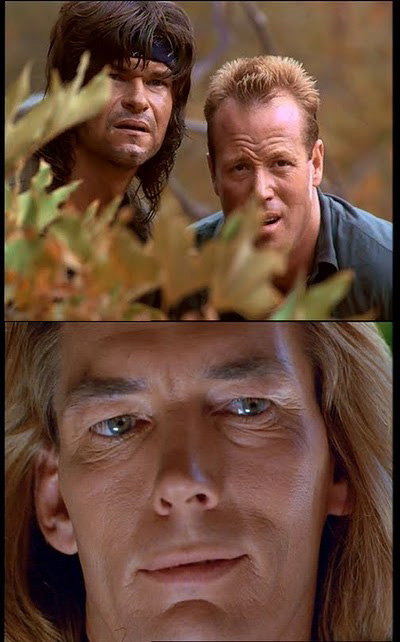 In Deadly Heroes, Billy Drago is a psychopath who owns an island, and Michael "Eddie & The Cruisers" Paré must infiltrate his compound to save a captive woman from being malignantly pawed at.
Nobody in the history of film owns an island and malignantly paws at a woman like Billy Drago. Nobody whispers sweet nothings of sexual menace in the ear of a captive fiancee so tenderly. If the real Billy Drago needed recruits for private island rooftop gun duty, I'd sign up in a heartbeat. Sometimes I'll show up with a machine gun and guard an island for a few hours in the hope that Billy Drago will show up and tell me to tie up a woman. His presence in these films is so commanding that the words "Billy Drago" and "island fortress" will be forever etched into my reality. Watch them back to back and see a true master at work.
And you know what? He's made a lot of movies that I haven't seen. There's probably six or seven others where he owns an island and paws at a woman, but they're treasures yet to be discovered.
For further famous brother action, see True Blood (not THAT True Blood, obviously), in which Jeff Fahey must infiltrate Billy Drago's compound to save Chad Lowe from being malignantly pawed at.

His filmography isn't his only gift to the screen. Remember the weird teen from Northern Exposure? 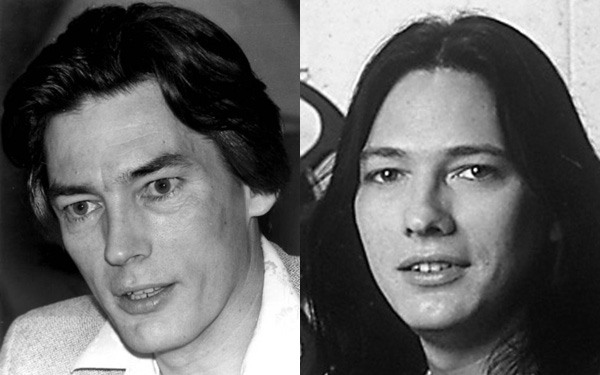 5. The Autographs of a Madman

Billy Drago had a recurring role on the cult TV series Charmed, in which he played a demon named Barbas. I've never seen it, because it sounds like a real piece of shit. However, this role led to some wonderful pieces of Dragobilia: his autographs from fan conventions, which read like the scrawling of a deranged murderer: 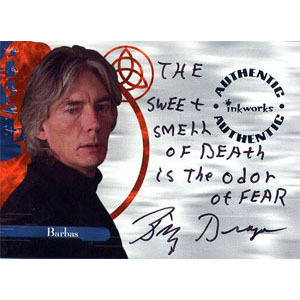 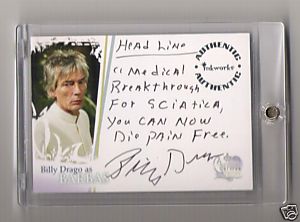 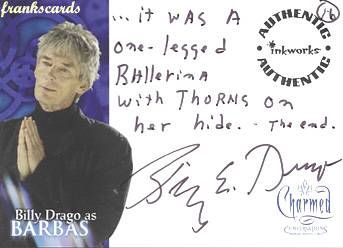 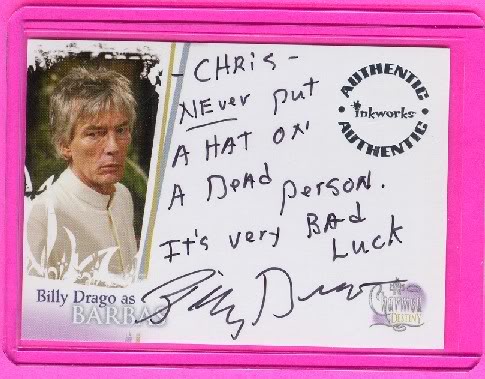 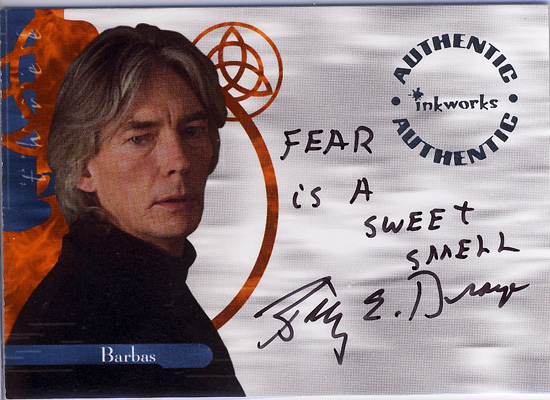 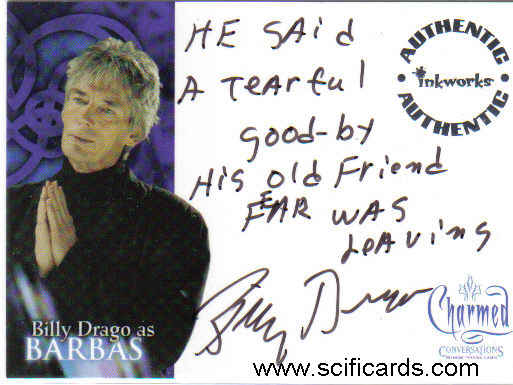 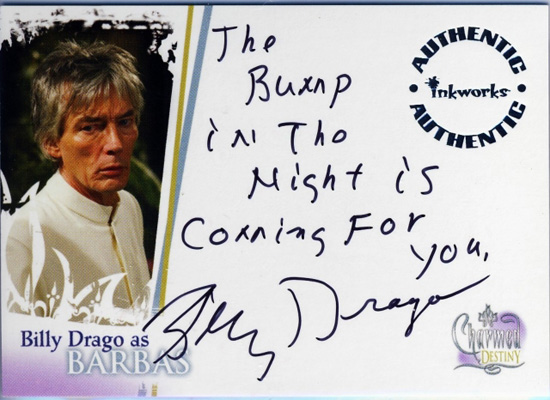 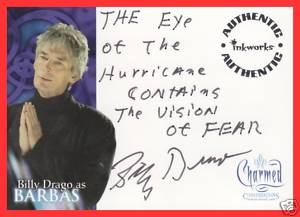 I don't know whether these are quotes from the show or just Drago's deranged personal reflections on the nature of terror, but I'm just going to go ahead and conclude it's the latter.