If there's one thing I know in life, it's that dogs on boats are the greatest thing on God's green Earth. You can have one without the other, but once you put them both together you're going to find out what you've been missing all this time. First, let's talk about boats. The helpful heading below will let you know when you're in the boat zone of the article. The dog zone follows shortly after that.

Boat ownership is not so much a stupid hobby but a symbol that you've done something in life. When someone sees a boat owner they say, "Look at that guy. Is that John Ratzenburg?"
"You mean Ratzenberger?"
"Yeah, that guy. Look."
"No, I don't think that's him."
"Damn, I could swear it was him. HEY CLIFF!"
"What the hell are you doing?"
"Eh, it's not like he doesn't get it all the time. Calm down, Martha."
"I can't go anywhere with you." 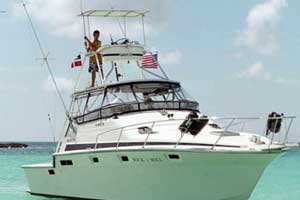 A boat. Not that exciting.Few people who own boats lack life experience. You don't see babies owning boats. If you see a baby on a boat chances are there's an adult around, probably the father. Women generally despise the ocean and everything in it. This stems from centuries of the sea swallowing up sailors and making widows out of their wives. This doesn't happen so much anymore. It was a very hungry sea but it's stuffed from all the sailors. Yum-yum. But my point is if that a baby owns a boat that's one pimp ass baby.

There are two types of guys who buy boats. Rich men and men going through their mid-life crisis. The latter is pretty pathetic, or is that former. I always forget. People just use those two terms to pretend they're smart. They should just say, THE SECOND ONE. A guy will buy a boat because he hates his family. That's a pretty good reason to do anything, but he probably can't afford it and eventually the bank will foreclose on his boat. If you want to buy a boat you have to be a rich man. It's not so much about the boat than it is about the richness. I mean, if you have a boat then you must be rich right? Right.

A man may buy a boat to prove how rich he is to others. This may sound vain, but it's hard to prove to people how rich you are by shoving your cash in their face. It's not considered polite. Shove your boat in their face instead. Count your boats in front of them! Even if you have one boat. Just go, ONE, ONE BOAT! Ha ha ha ha.

Private boats are generally for recreational purposes and are of no real use to anyone. People have them just to chill out and drink beer on. A friend of mine once bought a boat because he thought it would cut down on his commute to work. He said that there's no traffic in the ocean and if someone is in front of you you just sail around them or ram them into some rocks. But then he realized his job is 160 miles inland and doesn't use his boat anymore. This is the same guy who bought a PS3 in order to sell it on ebay and we all laughed at him when his auction got zero bids and he had to return it to Target.

Boats are pretty boring by themselves. Once you get over the thrill of floating it gets really lame really fast. Many new boat owners find themselves standing on the port bow stroking their beards and muttering under their breath, "Hmm, this is alright, but it's missing something..."

It is said that dog is man's best friend. They are a little too friendly if you ask me. Nothing is more annoying than a dog that won't calm the hell down. Every time this dog I know sees me he jumps on me and practically starts tea bagging me. They are excited all the time because they are retarded and won't stop until you tell them to go outside and stay there. But then you feel bad because there is nothing worse in life than making a dog sad. So you're like, "Goddamnitt." and let him back in.

At least it's better than cats who suck and are worthless. What does a cat even do? Nothing. And why does a cat even exist? Don't ask me! They can't even share with each other. There are these two cats on my block that fight every night over the same territory. They are all messed up and ugly from the fighting but they never learn. 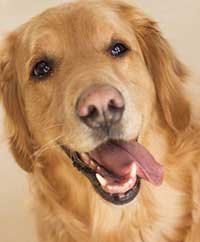 A dog. Good, not great.I have two cats because my girlfriend is female and throws her tampons all over the house like all women do so there are cats. And these two cats fight all the time. The fatter one gets super pissed and the only thing that will calm him down is putting him on the tall dresser where he'll proceed to hiss at the other one until you pretend to strangle it so he thinks it's dead. Dogs are just plain better than cats. Cats will fart on your face while you sleep for no reason.

Buying a dog is hard work though. Women have a saying that there are no good men left. They should change it to there are no good dogs left. It seems that every dog is so inbred that it falls apart the second you take it out of the box. There is no good place to buy a dog. Everybody says, "No! Don't go to the pet store! They're evil! No! Don't go to the pound! Those dogs are are bad! No! Don't go to that breeder! They are even eviler than the pet store!" There is no non-evil place you can go to get a dog apparently.

Everybody says do your research. I did more research looking for a dog than they do trying to cure AIDS. Fed up, I went to my best friend in life Pete. I said, Pete, I'm looking for a dog and I need some advice. He says, "Well, what kind of breed are you looking at?" Golden retriever, like the one in the hit movie Homeward Bound, I say. "Nah, those dogs got all sorts of problems." Well, what about a collie. "No sir, those dogs are too uptight." Okay, beagles seem cool. "Don't. Everybody will think you got it just because of Snoopy." Dejected, I walked home and discovered my house had been robbed.

Then you finally get a dog from a place that was somehow approved by everybody you know and it managed to survive the first two weeks in your home. It's fun for a while but then you stand around while the dog breaks everything you own and defiles your wife. You say to yourself, "You know, this is nice, but it's missing something..." 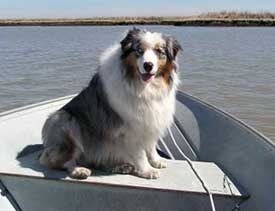 Dog on a boat. Now we're talking.Now you see where I'm going with this. When a dog is on a boat it calms them the hell down for once in your miserable life and they just stand there with a dumb look on their face. It takes the seemingly limitless majesty of the Earth's ocean to calm a dog down for one second. Many people take this time to enjoy a nice moment together with their dog. Nothing gay though. It's not like that.

It's stimuli overload for a dog. The dog's brain isn't fast enough to process the scenery, the sun, the wind, the noise and the incredible amount of ugly, ugly birds and will just sit there stuck in an infinite loop while it's brain struggles to catch up.

That's my dream in life. To have a boat and a dog and combine the two. No moochy women, no judgmental friends, just me and my dog sailing the open ocean but not too far away from land because there are pirates out there. Not the eye patch and parrot type but the fucked up rocket launcher type.