Blue Stripe - The Life and Times of a Dalek Slave 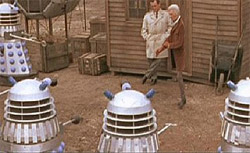 Daleks rounding up slaves on earth. Looks like a pair of Welsh women outside their hut.My name is Liam Fowler and I am a Dalek wrangler. I believe I've got on to about 45 years by now. I can't be certain, seeing as how until a few months ago I was slave labour in a mine on Skaro.

I was captured by the Daleks during one of their little escapades back on earth. Mostly they snatched up the lads from UNIT and some scientists. I was just a bystander, pushing a broom for them at their secret Orkborne-on-Bog HQ in Harrogate. A few Quonset huts and a boarded-up church was all, don't know why the Daleks even bothered.

That was, hmm, I want to say 1981 or 1982 when that happened. I was 21 at the time. Had a girl named Shaz and a little one on the way what maybe wasn't mine. We were all crammed into a council flat while I was trying to touch ends doing odd jobs. Painting, papering, mowing, you get the idea. Saw the signs for the job in Orkborne and the rest is history.

Every single sorry sod that got picked up with me is dead, most of them from accidents in the dalekanium mines, but a few from the Daleks. Which is not to say I was working in the mines all by my lonesome. There are plenty of people left to work in the mines. The Daleks can travel all over space and time, exterminating life and bringing back a few slaves here and there to do the heavy lifting.

When I saw the ad pasted to the mine shaft I was coming back knackered from a bloody awful shift. I just wanted to get back to my bunk, pull off my shoes and stockings, have a curry, and plop my feet into a good salt water soak. Seeing that ad for the personal retinue job made me realize there might be more to life as a Dalek slave.

The job sounded dangerous, but hell, I'm an old man for a slave. Live dangerously is my motto. Just don't let any of the Daleks know I said that is my motto. 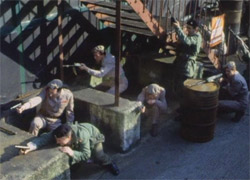 The UNIT way: stand behind crates shooting until you get disintegrated.So, hm, the ah, the retainer job. I expect you want to know how that is working out for me? Right. Well, it isn't all sunshine and biscuits, and sometimes I'm nostalgic for the mines, but overall it feels almost like I'm on holiday. No more dalekanium dust filling my lungs and no more getting zapped with the work prod.

It has also been a real eye-opener. I have seen a whole new side to the Daleks. Don't get me wrong, they are still right bastards, there's just a bit more to them than shouting "EX-TER-MIN-ATE!" and waving their little sticks around.

Most of what I do is keep the pepper pots out of trouble. It's easy to see them as single-mindedly hateful overlords, which they are, but they're also pretty feeble. Davros didn't really equip their little slimy football bodies for much aside from pulling the levers inside their larger robotic bodies. The robotic bodies aren't equipped for much more aside from topping people and trundling slowly along a flat surface.

Contrary to popular belief, Daleks can go up stairs, but it's a painstakingly slow process that involves little thrusters at the bottom of their robot bodies. It takes a lot out of them, so they prefer elevators or being carried up the stairs like an old sofa. Forget about nature. They can struggle over a well-kept lawn, but even something like a gravel road or a fallen branch is impassable terrain.

Seeing them try to roll over the top of a stick and getting caught up on it can be heartbreaking. You have to keep telling yourself that these aren't invalids, they're a race of bloodthirsty mutants bent on galactic domination. It's really pitiful, but if you let on you feel sorry for them then they'll disintegrate you right off. They'll blast you even if it means they'll have to wait hours for another slave to come rescue them.

Most of all the Daleks are petulant babies. Maybe I'd go so far as to call them toddlers, but just barely. Most everyone what has met one knows they love to threaten to kill you, but during their off hours they whinge constantly. Imagine a spoiled little prat crying for his mum, now give the twat a couple ways he can kill you instantly. That's a Dalek.

I care for two Daleks name of Hurk and Jason. They live in a one-floor metal house overlooking a carefully leveled slab of concrete. I am not sure, but I think they are a couple. Like all Daleks, they are at least casual exterminators, and their interests can take them far away. If they go, I am obliged to follow them.

There is no time for me to keep a formal work log, so these are mostly my thoughts and observations as I scribbled them down. I tried to pick a few worth a laugh. I'm trusting you with this, so don't go opening your gob to any of my Dalek masters. 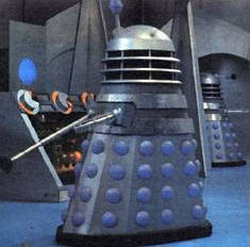 Daleks prefer leveled and polished concrete flooring.Arrived at the house of my new masters. Hurk is the red Dalek and Jason is the blue Dalek. I must remember this or they may exterminate me.

Another slave was brought with me to the house and the slave master made us fight to the death to see "which one is better." I reckon I was better by a hair since I'm still breathing. Death battles are no big deal after a while. You get used to them.

The house seems to be constructed very cheaply from foam blocks and tinfoil. This is the first Dalek house I have seen before, so I'm not sure if all Dalek houses are similar or this means they are poor.

They have a large telly that is always playing a show about a Dalek disintegrating a series of objects. It cuts very quickly from one object to the next. When I first walked in he was blasting a lamp. Then he blasted a carrot. Then he blasted an umbrella. It just goes on and on like that for hours.

Hurk and Jason each have their own rooms in the house with a door to match the livery of their robotic body. There is a small kitchen and a broom closet. There is a WC as well, but it's fitted for the Daleks.

I am in the unfinished basement. It floods a lot, but Hurk gave me a hammock to keep me out of the water.