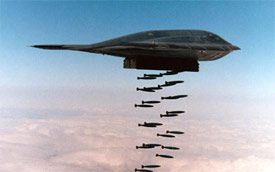 Recent success in Iraq by the Sunni terrorist militia group ISIS has made it clear that this administration's feckless plan of not dropping bombs in Iraq has proven a disastrous failure.

While America has pulled back from dropping bombs onto houses, roads, weddings, and various suspicious groups of men standing near walls, the terrorists have been active. They have recruited thousands of men and received millions of dollars worth of military aid from the United States, just as we advised last spring. Now they are taking advantage of the lack of bombs dropping onto Iraq and are attacking Iran's allies in the Iraqi government.

Whatever public opinion may be about the success of the 2003 invasion of Iraq, that invasion brought with it the implicit promise that we intended to bomb things and continue bombing them until peace was achieved.

Unfortunately, we left Iraq with the job unfinished and tens of thousands of bombs left undropped. Several buildings were still standing. There were some uncratered fields. We failed to drop a bomb on a factory and for all we know now that factory is making bombs. There was a truck with a dog in the back, right there where anybody could see him. He had a red collar and everything and we just let him go. God damn it all, we let him go.

None of us want war. We just want bombs to fall out of the air onto houses and mosques and those pickup trucks with the machine guns on the back.

For those preaching restraint, we restrained ourselves from dropping every bomb we had, and look where that has gotten us. Terrorists now control almost half of Iraq's oil rich north and they are moving towards the capital of Baghdad. Who is going to bomb them? The Japanese? The Russians? Once again, it falls to us to help out in the Middle East with our bombs. We've done a lot to help the region, but there is more we can do. 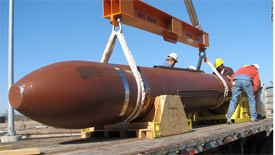 "We have jets that can fly from our bases in America and could be dropping bombs on Iraq within 24 hours," said my friend who read a Tom Clancy novel in high school. "Helicopters can drop bombs too. How far is Afghanistan? I bet they could fly from there."

Look, we already have bombs. It's not like we have to build new ones. We have huge warehouses full of all different sorts of bombs. They're not doing anything else. Are we going to stand idly by and watch Iran take all the credit for bombing things in Iraq? Or are we going to step up, as our Founding Fathers dreamed, and relentlessly, tirelessly bomb Iraq into rubble.

By not following through on our commitment to drop 100% of our bombs on Iraq the blame for the atrocities of ISIS belong to us. The Iraqi people believed in us. They fought for us and sacrificed for us. Now, when they need us the most, we cannot turn our backs on them.

It is our solemn duty to bomb them.

If you need more military advice, Zack Parsons should have a whitepaper up on his Facebook soon.