With The Manga Killings, Abner Morland establishes himself as an extraordinary talent. Note the subtle use of "heretofore" as the opening word of every paragraph. Pay close attention to the pivotal moment in which the main character loses his virginity while describing the sex scene from Mass Effect to his lover. Ponder the meaning behind Morland's decision to replace every vowel in every curse word with a *.

Features the most side-splittingly hilarious account of the North Hollywood Shootout that I have ever read. "Officer requesting medical- woops I slipped on a banana peel!" is destined to replace "Nice! I'm Borat!" as the go-to quote for comedy afficianados.

Here Morland effortlessly strides into unexplored regions of the human condition and manga, plants his flag, and beckons other writers to follow in his bold wake. This triumphant debut will change the landscape of American literature for years to come. 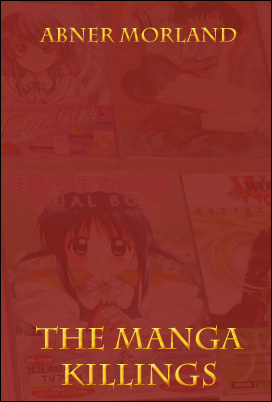 Never before has a book so perfectly captured those wistful summer months between adolescence and your first awkward, sweaty experience in the dark, burying a soiled suit of Stormtrooper armor in the backyard after your parents fall asleep.

Morland displays an unparalleled command of the alphabet. Nearly every letter makes an appearance, and some are repeated. Although his usage of numbers can be hit-or-miss, they are daring nonetheless.

Look out, Hemingway! On his bio page, Morland warns, "if I ever come across that miserable bastard I'll knock the apple right of his head."

This is the first book I can recall that refrains from describing characters until just after their final appearance.

I find myself revisiting the waiting room chapter again and again. Consider:

"Bored. Hate these magazines. So bored. When are they going to call my name? Jeez, there's like nothing to do in here. At all. I wonder if anyone else in here is bored. I wish I had brought something to read.

When this forty-page interior monologue came to a head with the main character falling asleep and missing his appointment, I did a fist-pump and shook my head in awe.

This marathon of ambition has a depth and breadth and sense of vast reaches of inimical time unlike anything else available today. Morland ranks right up there with Tolkien and Barkley, especially in the chapter "My Charles Barkley Autobiography", which is interspersed with lyrics from the songs of the Lord of the Rings trilogy.

At times haunting (the ghost car chase), heartbreaking (Victor's redemption and subsequent car chase), and powerful (the monster truck chase), this masterpiece may be the greatest reimagining of The Pelican Brief ever written.