It's talking-animal hell for Joseph "Jay Dub" Wade and Ian "Professor Clumsy" Maddison this week as they tackle Madagascar 3: Europe's Most Wanted and Top Cat: The Movie respectively. After that, Ian takes a break on the moon with Iron Sky; Sean "Keanu Grieves" Hanson tries his best to enjoy Sound of My Voice; and Martin R. "Vargo" Schneider sets himself up for a fall by letting the Internet tell him what to watch. Whoops, looks like you're watching Little Monsters, Marty. Have fun with that.

EXPECTATIONS: Oh boy, here we go again. To me, the Madagascar franchise represents the dregs of the talking-animal genre: a notch above DTV Dr. Doolittle sequels, but at the bottom of the cavernous abyss separating it from the rest of Dreamworks' increasingly strong catalog. These films are the last vestige of a Dreamworks content to coast by on films about bouncing animals dancing to last year's greatest hits. Rumor has it Madagascar 3 isn't terrible, but when reviews explain that it's better than the first two because this time it's actually good, it makes me wonder whether some of these people really know what they're talking about.

REALITY: It's always admirable when an animated film tries to impart a message to its young audience. Of course, most cartoons these days try to include some kind of a message, even if it's as base and simple as "Be yourself!" But so many of these films go awry when they become overloaded with dancing, poop jokes, random musical cues, and mugging to the audience. These are the reasons the first two Madagascar films make me want to gouge my eyes out. Madagascar 3: Europe's Most Wanted has a lot to answer for, but its one great success is that the gags never bog down the message. 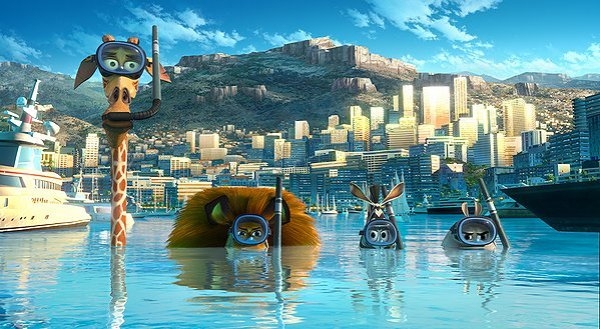 See, it's funny because the giraffe is taller than the other animals. Giraffes are tall.

The great thing about the Madagascar series is that the premise of each film is explained right in the title. Madagascar is about a bunch of zoo animals that go to Madagascar. Madagascar: Escape 2 Africa is about that same bunch of animals fleeing Madagascar and arriving in continental Africa. Finally, Madagascar 3: Europe's Most Wanted features these animals yet again as they are hunted down by European police officers. Alex the lion (Ben Stiller), Marty the zebra (Chris Rock), Gloria the hippo (Jada Pinkett Smith) and Melman the giraffe (David Shawarma) follow their asshole penguin comrades to Monaco, where they run afoul of Cpt. DuBois (Frances McDormand), a crazed animal control expert who becomes hellbent on killing Alex and putting his head on her wall. The animals escape by running away with, and then inexplicably purchasing, a traveling circus.

That all happens in just the first act. To say that this film is front-loaded with a metric ton of animated gibberish is an incredible understatement. The first 30 minutes or so is visually dynamic almost to the point of becoming incoherent. After rescuing the penguins from a casino, the animals commandeer a souped-up SUV (complete with nuclear reactor, because why not?) and tear-ass through the streets of Monaco, all the while being chased by Cpt. Dubois, who runs through brick walls without flinching and snowboards through traffic on her motor-scooter (again, because why not?). This goes on for a while, and visually references action scenes from about a dozen films, including Chicken Run and X-Men Origins: Wolverine. Thankfully, things slow down and a more sensible plot is set in motion once our heroes join the circus, but good god is this first act exhausting. 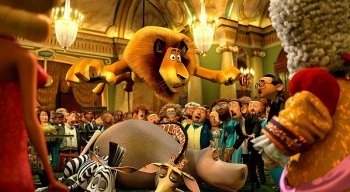 The best way to make your film feel current is to throw in a reference to a movie from the nineties.The circus plot introduces us to an entirely new cast of animals, all of whom are more compelling characters than the ones we've been stumbling around with for the past two films. Here are circus performers past their prime, afraid of putting on the kind of show for which they were once lauded as superstars, and for which they had such passion. The Russian tiger Vitaly (Bryan Cranston), for example, ended every show by leaping through an impossibly small hoop, until his hubris got the best of him. In a fit of desperation, Alex encourages them to be the best animals they can be; to do the impossible, not because they're expected to, but because it's what they loved to do.

Amid all the flimsy Point A-to-Point B storytelling and nonsensical sight gags, here's a message that suddenly rings very true. It's a message that kids deserve to hear, and adults would do well to remember from time to time. Accepting our mistakes is the first step on the road to achieving better and brighter things, and once we can do that, the impossible isn't so difficult. Walt Disney once remarked that doing the impossible was kind of fun; in fact, he built his entire company around achieving the impossible on a daily basis. It seems like Dreamworks has suddenly remembered this as of late. While some of their stories haven't exactly been what I'd call classic, they have nevertheless been entertaining spectacles of animation. For every Megamind, there are two Kung Fu Pandas and a How to Train Your Dragon. (Somehow, this still doesn't account for the Shrek films.)

Dreamworks clearly knows what they're doing on the technical side of the process. Madagascar 3 is as visually lush as any of their recent films, and the finale in particular is a rotating, candy-colored seizure factory of entertainment. It makes little visual sense, but then when has that ever stopped animators? The fact of the matter, though, is that Madagascar 3 is a difficult film to hate. Its sense of humor is pretty brain-dead, but its heart is in the right place. If there was any one thing that really had me squirming in my seat, it was Chris Rock's now-infamous "Afro Circus" ditty. The gag alone would have been harmless if the film didn't repeat it four goddamn times, and if everyone in the theater didn't sing along to it every single time.

EVERY. SINGLE. TIME. God help us all.