Supreme Overseer Leader is the foremost authority on all bug shipping within the sector. His gaze knows no limits, his icy grasp is absolute and inescapable. He currently resides in a cozy chalet with his life partner, an eternally screaming medical skeleton named Judith.

What's a bug? Is that even a real thing?

From a philosophical, scientific, or spiritual standpoint, bugs do not actually exist. There is absolutely no evidence to suggest that bugs have been or ever will be real. They are easily identified by their spinning clockwork heads and the presence of at least thirty legs.

Where does one get bugs?

They are more plentiful than you might think. Check with your neighborhood bug monger, or the bug section of any ethnic hair product store.

I got this bug in my possession. Where do I ship this bug? 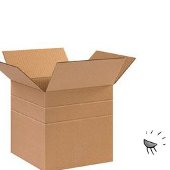 Moonbase Primaris. Station Twinlaw served as the primary destination for bug shipments in the past, but all systems went dark after a prolonged distress signal containing only silence, so now only Moonbase Primaris is adequately equipped to receive your bugs

How can you be defeated?

Start with disabling the four floating mechanisms which generate my impenetrable shield. Once they're out of the way, aim for the glowing weak spot on my chest. I'll alternate between a long range blast of psionic power and an enraged charge, but with good timing you can probably dodge those and make short work of my first form.

My second incarnation is trickier, but beyond the scope of this Q&A session. Get ahold of me through a beam station and I'll help you out.

How much does it cost to ship a bug?

That depends on the size and weight of your bug, the credit clearance granted by your societal level, and the survival skills you display in the Commerce Gauntlet. Extra discounts are granted for each opponent drowned in the ball pit.

There is no law. There is no free will. There is only the whim of Supreme Overseer Leader. At the moment I am greatly amused by bug shipping, so I allow it. In the future I might ban it, as I was forced to do with the phrase "haters gonna hate" when that became stupid - the very first time it was used.

Where is your secret shelter? Why are you so dumb and baby-like?

To reach my secret shelter, stand in the precise center of The Hub and place your feet on the barely visible activator... wait just one minute! Captain Erztwhile, is that you? I don't know how you've escaped my necrotroopers for so long, or how you managed to access a terminal without setting off a tracer, but I hope you've enjoyed these small accomplishments.

I will capture you and your rebellious friends. You will tell me the location of the ancient tome. When I am done and you are decaying meat, your name will only be mentioned in tones of disappointment by those you failed to save.

Wait a minute, you're the one that asked about defeating me, aren't you? Damn you. I hereby retract my offer to further explain my weaknesses to you. If, however, any non-rebels would like to have a serious conversation about how to defeat me, I would be more than happy to oblige.

What do I put in the box with the bug?

Your bug is much more likely to remain calm - and therefore survive the trip - if its surroundings remind it of home. Take a magic marker and write "HOME" on every surface of the box's interior, then start a small cozy fire inside before sealing it up.

How does shipping a bug differ from holding a girl's hand for the first time?

What if I ship a bug to myself, then decline the package when it arrives?

Such a maneuver would exhibit a level of creativity and cunning which cannot exist in the sector. Please report to the nearest processing facility.

My bug bit me! What now?

Within moments, your surroundings will appear to grow impossibly, towering over you. Not to worry; this is just an optical illusion! You are only shrinking. Soon the very parts of your brain that store your identity, memories, and personality will fuse, forever disappearing as they become simple conduits for instinct as you complete the process of becoming a bug.

I understand the appeal of the bug shipping craze, I really do. One thing is holding me back, though. What if the shipping clerk won't let me ship my bug until I tell him the passcode to your holonetwork's security grid?

What an odd thing to worry about! I seriously doubt the scenario you've described would ever take place, but if it does my passcode is (minus the quotes): "secure"