Bioshock provides a horrifying experience for nerds like you and I. What could be worse than traversing a crumbling utopia and being forced into awkward social interactions with psychopathic mutants while under the constant fear that the ocean will flood the city, giving us the very bath we avoid for days at a time in real life? Of all the horrors on display in the game, one rose above the others and became a gaming icon before the game was even released: Big Daddy.

This cross between an ED-209 and the little old-timey scuba diver figure you put in your goldfish's tank lumbers throughout the ruins of Rapture, protecting his little sister as she sticks needles into dead people (the utopian alternative to hopscotch). He's big, doesn't attack the player unless provoked, and... that's about it. So why has the Big Daddy gone over so well?

While his design is compelling at first glance, there are a lot of individual elements that must be isolated and analyzed to fully understand Big Daddy's popularity. 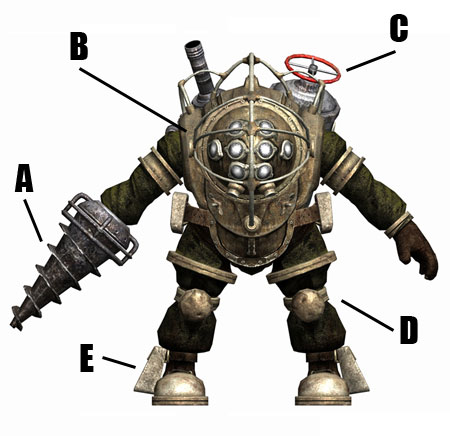 A. Large drill, weighing approximately 120 pounds. Carried at all times in case someone needs to open a bottle of champagne and the cork has crumbled. Lugging around a heavy piece of machinery for such an unlikely event shows consideration for others and an impressive level of determination. We like this guy already.

B. Helmet with eight very small portholes to look out of instead of one large glass bubble or a plastic bag. Six of these portholes are completely useless because Big Daddy only has two eyes, and the remaining two have been obscured by in-game advertising brought to you by Hot Pockets. Additional portholes will be available as downloadable content on the Xbox 360 at the low price of $4.99 each.

C. Butter valve. Turn for butter, if you think you can handle it.

E. Four-inch-thick ankle guards. Not designed to protect his ankles from you, but to protect the outside world from his unpredictable ankles.