The Academy Award nominations have been announced, and once again, the old farts' club has nominated only the films designed specifically for them. We've got one of those in the line-up today, but before we get to it we need to have a face off between wolves and God; prove our innocence by threatening suicide; and do some boring shit that nobody cares about.

EXPECTATIONS: Joe Carnahan is, in my opinion, a director that everybody should be keeping an eye on right now. After the frankly brilliant The A-Team, Carnahan has teamed up once again with Northern Irish leading man Liam Neeson and, with The Grey, is making a film that is very close to both their hearts. If anything, my expectations are too high. There's no way this is going to be as good as I think it will be, right? 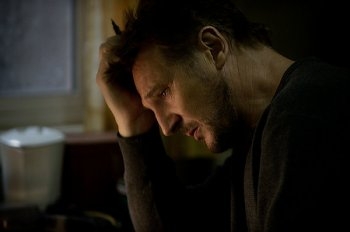 Don't let the dyed hair fool ya, at my age it's hard to keep your eyes open for more than two hours at a time.The Grey deals with death more directly than any film I have ever seen, taking its audience to the edge and back to boldly highlight both the inevitability and uncertainty of our final moments. The Grey is not lighthearted. It is not an action film about Liam Neeson punching wolves. It is a much deeper and more emotionally challenging film than that, and it will leave you feeling like you've been turned inside out.

John Ottway (Neeson), reeling from the loss of his wife, takes a job shooting wolves on an Alaskan oil rig to protect "men unfit for civilisation." After deciding against suicide, he takes the next flight out with a group of other employees. When the plane crashes, he must lead a handful of survivors against a pack of wolves protecting their territory. Along the way, they learn about their own primal nature and come to terms with the intricacies of life and death.

Neeson delivers a performance that could be considered the finest of his career, as a character who understands death but hasn't quite got the hang of life. In his interactions with the other members of the group, he asserts strength and qualities of leadership that we all know he can deliver, but as the film wears on and everything becomes much more intimate, he finds a deep, dark place within himself to draw up some powerful emotions. Neeson lost his own wife in a skiing accident in 2009, and it is clear that this role deals with some very personal issues for him. It also hints at a close working relationship with Carnahan, who in turn deals with his own faith. 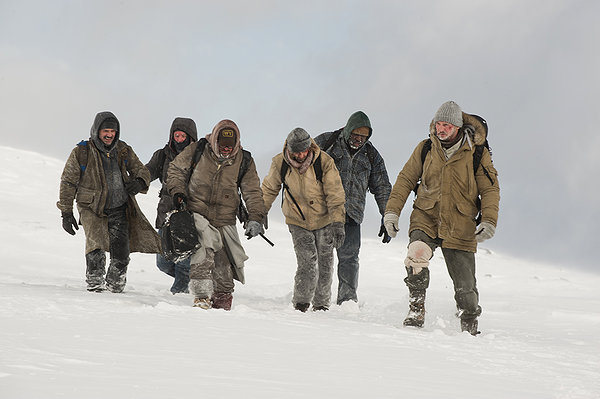 Not the most impressive group of guys to be stranded in the wilderness with.

The rest of the cast also delivers admirable support. As the group discusses faith, life and death, it all feels very personal and real, and the dynamic amongst the survivors reflects that of the wolf pack. As confrontations occur within the group just as they do within the wolf pack, the men delve into a more bestial part of their being before dealing with their own beliefs and confronting death on their own terms. There is no weak link in this cast; not only is every man given an individual depth, but also they are each given a very personal view of their unavoidable end. You get the feeling that this was a very important work to all involved. 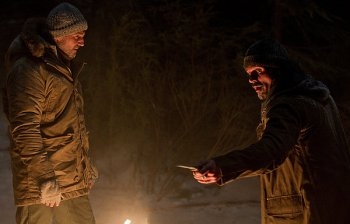 Knife versus staring fights always go in Neeson's favour, regardless of his weapon of choice.The main focus of this film is death, though it never feels especially morbid. Always, The Grey puts its audience in the position of the doomed. The plane crash itself is painfully frightening, as are the ever-watching wolves, either hiding in the shadows with unblinking eyes reflecting flame or with only the condensation of their breath to betray their presence. The wolves are at once purely elemental and eerily unnatural, the absolute essence of abject terror. But it is not just fear that drives this theme, there is a sweetness to it as well. Ottway helps people through their final moments in a tender, understanding way, talking them calmly through the process of dying. These scenes are deeply moving and must have been difficult to get right, as well as requiring a great deal of faith in one's audience to accept.

Of course, death is something we will all have to deal with at some point, both directly and indirectly. Rather than trying to make us forget about our own mortality, The Grey confronts it head on, reminding us we're all going to die, it's going to be scary and confusing, but we can't avoid it. At every point, the characters feel the shadow of death upon them, something that is expressed beautifully without simply being told to the audience. Frank Grillo as Diaz, a principal member of the ensemble, attempts to articulate it but simply doesn't have the words, though the message is clear anyway.

This fear of the unknown, the unwillingness to give up until that final moment of clarity when we know it's all over: It's deeply affecting material that really shouldn't be missed. For what this film is marketed as, everything you might think this film is going to be, it is so much more. You'll get your thrills and your horror, but don't be surprised if you spend more time crying than fist-pumping.

MINORITY REPORTS: The Grey is the gold standard for a man vs. nature film, but it falters a little on the man vs. God; The Grey approaches religion as a 13-year-old approaches religion, with simplicity and without nuance. Still, if all Hollywood films were as good as The Grey, our jobs would be a whole lot easier. - Sean "Keanu Grieves" Hanson

This sounds like a film I can't wait to see, but I think Carnahan and Neeson's reputation for gung-ho action are going to throw a lot of people off. Nerd backlash over Liam Neeson not punching more wolves commencing in 3....2....1.... - Joseph "Jay Dub" Wade