Screw It, I'm Calling In Sick

Press 1 to hear your messages. Press 2 to-

The perfect crime. Heh, heh, heh. Old man Kyanka doesn't suspect a thing.Look man, *cough* I can't write an update today because I'm pretty sick. I guess I caught that *cough, hack* stomach virus that's been going around. I've been puking all night with occasional spurts of diarrhea. Heh, no pun intended on th-*cough, wheeze, barf*-that one. I don't want to get too graphic but my shit smoothies literally have a yellowish tint to them. And when I get up from the toilet snot drips out of my nose and into the shit covered toilet which is red from all the blood in my vomit and stool.

It's that bad. I have to keep taking showers because the shit drips off my asshole and down my leg and that's simply no way to live. My shower drain is sort of clogged with hair and mold so the water backs up and my feet slosh around in the shitty water and it stinks up the tub. I would go get a plunger and some Drano to unclog it but I'm just *cough, snort, sneeze* too sick right now.

So yeah, I won't be showing up today. I'm really sorry to let you know on such short notice. You can get a replacement writer in time right? Shit man, I'm really sorry. I think I got the flu from this Chinese place I go to all the time. They received a C rating from the Department of Health but their General Tso's Chicken is to die for, which I think I might be doing right now! *hack, cough, moo* Ugh, it's just torture.

I looked up their health report and there was a vermin infestation in the kitchen and investigators found that they were just rounding up the rats and serving them to customers. I thought it was an ingenious idea but state regulators had a different opinion. So what if they debone chickens with their teeth! That's just how they do it in China! If a Chinese restaurant gets a C rating for its authentic cuisine then the laws in this country are racist and outdated! There, I said it. I won't go back on it. Anyway-*cough, heave*

I would have come in today because my job is important to me, it really is, but it's just that I don't want to get anyone else sick. I'm sure this cold I got is pretty contagious *cough, cluck cluck cluck* and I don't want to give it to any of the other guys. I know we don't work in a formal office or anything but I'm so sick that I might infect the others through private messages or data packets. With the amount of packets we sniff on a daily basis the packets might came down with something and bog down the servers.

In fact I think that's how I got this fever. I saw maxnmona coughing pretty hard the other day and considering the massive amount of time I spend making out with him in the break room on the pool table on Taboo Tuesdays it's no wonder I got sick. Yeah I know you said to stop role playing with other writers at work but we try, we really do try. So yeah, what a coincidence that he just gets over his cold and I got just came down with it this morning. Yeah, that and the Chinese food, that must've been how it happened! *cough, caw, roar*

In fact they say that U.S. businesses *cough* lose almost $100 billion dollars a year in revenues because of employees who show up to work even though they are sick. I would be glad to work sick because I am that much of a dedicated employee but here's a quote from an article that recommends not to.

Some experts say presenteeism can actually result in a greater loss of productivity than absenteeism.

In a new survey, almost half, or 48 percent of employers report a problem with presenteeism. That's up from 39 percent last year, and it's a situation more organizations are taking seriously.

This only shows that by me staying home I care MORE about my job and my coworkers. I care deeply about their health and well-being, and if I was ever responsible for making them ill, I just... couldn't live with myself. I would end my own life if that happened. I would fucking end it all right now. Do you want that on your conscious for the rest of your life? Do you, you fuck?! I'm doing it! Say good-bye to Acetone! It's the last time you'll ever see the likes of me again! I was a legend! You are nothing!

The U.S. Department of Labor estimates that workers who call in sick for illegitimate reasons cause businesses to lose millions each year. In fact on the day Star Wars Episode 1 came out U.S. businesses lost a staggering $400 million in worker productivity. I understand the severity of lost man-hours to illness. That's why I am taking this very seriously. Don't bother calling back to see how I am when you receive this message. I appreciate the thought but there's really no need to. After I hang up I'm just going to go ahead and try to sleep this yeast infection off.

Just so you know I'm not faking it let me go ahead and send you a cell phone picture of myself right now. Here it is. 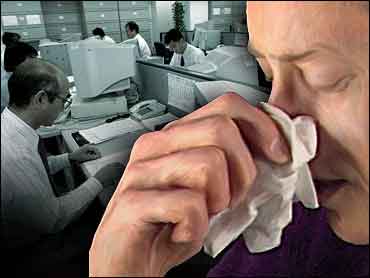 That's me right now, with the tissue and everything. I can barely stand to speak I'm so sick. I'm so sick the CBS Early Show web site decided to use my picture on their article about showing up to the office sick. They added a snazzy background of a generic office workplace and sent it back to me so I could show you how sick I would be had I shown up at the office and gotten everyone else sick leaving no one to update the front page. When CBS News says you're sick, well you better believe it or you might end up a dead duck. You don't want me to end up a dead duck do you? Do you?!

THIS UPDATE IS ONLY A DRAMATIZATION. Do not attempt to go to the zoo sick! Please have some consideration for the friendly giraffes who do so much for us.Ugh, my sore throat feels like it's on fire. I must have a really bad case of the Parkinson's. *hack, cough, tweet, hee-hee-hee-hoo* You might be wondering what those animal sounds are in the background. I'm just watching a nature show and the volume is up real loud. It helps me feel better actually. It's not like I'm calling in sick to go to the zoo and I'm calling from the zoo right now oblivious to the fact that you might hear zoo sounds in the background and figure out that I'm not really sick and these are just a bunch of lies in order to go to the zoo and see the new wild monkey exhibit the newspapers are raving about. I would never do that.

I used to work with a guy who would fake being sick all the time. One day it finally caught up with him when the boss saw him at the zoo when he was supposed to be at work. I take my job very seriously and would never do anything like that. I am 100 percent genuinely sick and would never ever stoop that low to see the monkeys, no matter what kind of crazy simian hijinks those cute little guys get into. But I think if I did go to the zoo when I was taken ill it would really help me feel better and actually get me back to work faster. So if you happen to go to the zoo today and see me here, then I was actually just trying to get better so I could come back to the job I love so much. *cough*

So yeah, *cough, hack, 'Hey Hassan are you done with the phone yet? Let's go see the giraffes!'* Shhh! *sigh* Anyway, I should be in tomorrow at the earliest, or next week at the very latest. Depends on whether I decide to buy the annual zoo pass or not, I mean, if I can get over this, uhm, AIDS.

Thanks for being such an understanding boss, Lowtax. See ya later, bro.