Lowtax: "I've got a fantastic idea! Let's spend embarrassing amounts of money buying cans of liquid that taste like caustic cough syrup-flavored paint thinner! Then we can drink them and consequently forever lose our ability to produce children! Then we can write about it! On the INTERNET!"

Garbage Day: "That is a wonderful idea!"

Lowtax: "It is fun to be retarded!" 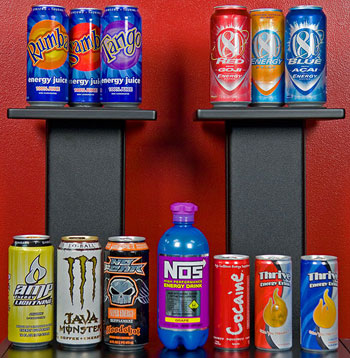 Garbage Day: Thrive claims to be "unlike those other drinks that taste heavy and oversweetened, or have a bitter aftertaste." I suppose this claim is technically true, since it tastes light and acidic, with a pungent aftertaste capable of disintegrating aluminum siding. Take that, you nefarious "other drinks!" I've always believed there's nothing quite more enchanting or erotic than a tribe of naked Oompa-Loompas bathing in molten, carbonated Nerds, and now Thrive can cram that experience right down your stupid fat throat. Thrive: providing you, the consumer, with FDA-approved levels of opaque, sugary, lava chemicals skimmed from the bathtub since whenever the engineers flipped the switch in the swill factory.
RATING: 4 / 10


Lowtax: As a taste of things to come (pun intended), the genius brain wizards at Thrive and Other Toxic Chemicals Inc. decided to stamp the phrase "Can You Handle It?" across their drink. Now think about that phrase for a moment: they're admitting most people find it difficult to consume their product. I assume this trademark beat out "You're a Pussy and You Can't Drink This Because You're Too Busy Sucking Another Man's Dick," and "See If Drinking This is More Enjoyable Than Having Your Entire Neck Exploded." In Thrive's case, the "it" undoubtedly refers to their drink's overwhelming assault of artificial pineapple, which inhabits the Periodic Table somewhere between "earwax" and "the shit they dump on movie theater carpets to cover up the smell of drunk teenager puke and semen."
RATING: 2 / 10

Garbage Day: When first swallowed, Thrive Low-Carb seems inoffensive enough, but soon it surges up your throat and begins dissolving your tongue, instantly reminding you that you've consumed some vile sugar substitute invented by those lizard aliens from "V." It's like chugging an oddly saccharine batch of liquid explosives, then having someone trigger the remote detonator from inside your colon.
RATING: 3 / 10

Lowtax: My principle complaint with Thrive wasn't its revolting taste, retarded design, or expensive price. Nope, my major issue was with all them stupid carbohydrates sittin' around and acting like assholes. When I was in high school, my cross country coach would repeatedly stress the importance of consuming carbohydrates the night before a race, primarily through pasta and bread. I suppose Thrive Low-Carb was created to appease all the people afraid of accidentally drinking liquefied ravioli and then getting tricked into running a marathon, both of which would be more appealing than drinking any version of Thrive.
RATING: 2 / 10