According to a surprisingly funny report on CNN, China's state-run media has issued some new and unusual guidelines for content. According to the Chinese document, posted online, a recent study of Chinese movies and TV productions found some "incorrect creation."

The CNN article focuses on a uniquely Chinese aversion to time travel plots, apparently due to the sanctity of the ancestral past in China, but Chinese censors uncovered a variety of odd sticking points. Other notable offenses cited in the report include: "supernatural drama, random compilation of myths, bizarre plots, absurd ways, rendering of feudal superstition, fatalism and reincarnation, value orientation ambiguity, and the lack of significance of positive thinking."

These rules seem to be strong encouragement to avoid these topics, although knowing China's famously authoritarian government and Google translation's failings there might be an implied subtext of gas chamber vans I'm not picking up. What I do know is that the pressure to develop movies and TV shows under these guidelines (and thus receive the support of the state) is going to produce some very interesting projects that foster "positive thinking" and "value orientation certainty."

The CNN article imagines American time travel movies with time travel removed, I prefer to imagine the possibilities of TV under the broader Chinese guidelines. 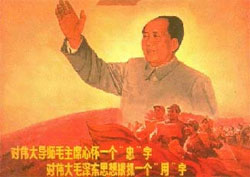 Ghost hunters in Beijing pursue strange phenomena using a variety of technological devices and supernatural techniques. The culmination of their efforts is the realization that the ghost was inside them all as the ideal of the People's Revolution. Each episode ends with the ghost hunters denying the supernatural and affirming their belief in the Chinese Communist Party.

Each episode will focus on the heroic efforts of a different factory or farm where quotas of goods promised to Western buyers have been exceeded through hard work and determination. The first week: an incredible 650,000 iPad2 screens produced in one day at Foxconn allow Lines 2 through 44 to celebrate their achievement and move into early production of an electronic toilet seat for hotels in Japan.

Tsui Lei's Do Not Believe It (Reality)

Strange human oddities, bizarre talents, and unusual individuals are kept off camera and described to the audience in extended natural metaphors. These oddities are dismissed as impossible and are sealed into shipping containers and loaded aboard Tsui Lei's cargo ship to forever sail the seas in exile. No record is kept of these oddities, not even a copy of this show which is broadcast once and destroyed.