Prophets Of The First Internet Age

The year is 3017. Humanity has risen from the ashes of ignorance with a renewed focus on knowledge and meaningful advancement.

With more than 43% of the population working in research, incredible progress has been made. Perpetual energy. Advanced education techniques. Machines that break matter apart and reform it into food, water, and oxygen. Life extension therapy. Enormous spacecraft capable of sustaining humanity indefinitely, providing the environment of a planet on a platform fast enough to evade potential dangers such as asteroids and dying stars.

It has been three hundred and eighty nine years since the last of these swollen transports silently slipped from the Earth's atmosphere, leaving it up to the unindexed wildlife to decide the planet's next dominant species.

Though life has improved considerably, there are always those who perceive progress as a forced march in shackles, spurred along by unseen and untrustworthy figures. A cult has arisen, its members convinced that the old ways were better, that the key to humanity's future lies within the overgrowth of its abandoned home planet. 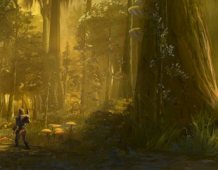 A small shuttle sits in the mossy tundra of what was once New York City. Though the skyscrapers (like all man-made structures) were repurposed into fuel for transports during the exodus, their footprints and basements remain largely untouched save for the weathering of time and nature. Leaving his retinue of illegal clones outside to guard against anti-cult agents, Techscribe Arkus descends into one such structure.

Sitting cross-legged in the center of the enormous room, he extends his arms, closes his eyes, and feels out to the ridiculous machines around him - computers that once served as a hub for the first iteration of the internet. Though their circuits have long since fallen into disuse, he can sense that much of their information remains intact.

Arkus pulls a synthetic hood down over his face, a soft blue glow washing over his features as the garment activates, surrounding him with a visual representation of the network. He pulls up the first thirty years of the internet. Too much information to sort through, even with his considerable skills and technology. No, he decides the most efficient method of unlocking the knowledge of the old ways is to locate the person with the most posts.

There. A simple matter. Arkus compiles every forum post by the prophet named cooldudegoku in one data stack, then begins the task of sorting the knowledge. Each block of posts within a website is designated as a book, every block of posts broken into numbered entries.

The Techscribe's subconscious generates the digital tome within nanoseconds. Before departing, Arkus takes a rare indulgent moment to review a random sampling of the prophet's words.

"show me in the constitution where it says i cant mod my console to play free torrented games you retard and dont give me that 'living document' crap!! good unboxing video by the way, always wondered what the inside of an ipod box looked like" - The book of YouTube comments, passage 353

"yeah well i just remembered my brothers wedding is on the same day as the penny arcade expo but i already made my cardboard tube samurai costume soooo... haters gonna hate" - The book of Something Awful, passage 87


"Of course," whispers Arkus, in awe. "He had it right. That our people have strayed from such common sense is a regretful mistake. We can only hope that it is not too late to reverse course."


As a single tear rolls down Arkus' cheek, his lips draw back into an ugly, unpracticed smile. Beautiful. So beautiful.

"no way this game deserved way better than an 8 out of 10 are you kidding me. nintendogs got a 10 on another site so youre saying nintendogs is superior but youre not being objective. objectively this is better. never thought id see the day when a publisher so clearly payed for a review score but here we go. sheesh people i am never going to visit your site again and i was already blocking all your ads so you never got a cent assholes!!" - The book of GameTrailers, passage 9


Puffing out his cheeks and exhaling wide-eyed, the Techscribe marvels at the revelation.

"meh. Jeff Hardy didnt get kicked out of the wwe for drugs, it was because of politics. he refused to kiss mr mcmahons ass like all the other wrestlers! if you think it was because of all the meth he did your a mistaken. jimmy hendrix did all sorts of drugs and he still got to be the lead guitarist for the woodstocks. freddy mercury had aids and his band still plays on american idol. its all politics not drugs" - The book of CNN's comments section, passage 32


Arkus extends a hand, his fingers brushing against one of the ancient computers. To think, this very machine might have been running when those words were first typed. A chill runs through his nano-shielded spine.

"how do i tell if i installed my cpu backwards instead of forwards?? there is nothing in the directions and i cant tell if the pins are supposed to go into the holes or into the air like heatsinks. also how do you use an old sega game gear as a monitor if you dont have an actual monitor. gotta say this website is not very helpful about obvious questions" - The book of Intel's support forum, passage 1081


The Techscribe calls up the passage again, flagging it as the first text to be ritualistically tattooed across his abdomen.

"umm why is everyone so sad about community being cancelled? that show is not funny everything happens too quickly and their arent any jokes cause there arent any audience laughs" - The book of Twitter, passage 27


Arkus loses himself in thought. Minutes pass in the cool, mossy room as his mind applies the insights of the past to the problems of the present. This will be big. There will be no denying the truth.

With a bow to the silent machines of yesteryear, Arkus takes his leave. He prepares a wide range infoblast on the shuttle's comm system. This, he knows, is the day that the curtain is pulled back, exposing humanity's impostors in the inescapable light of cooldudegoku's revelations.