Unfortunately, things have gotten a whole lot worse due to several variations of the decades-old "Choking Game" that have been spreading among the youth like wildfire in recent months.

For those of you lucky enough to have survived your childhoods without encountering it, the Choking Game is a method youngsters use to induce a blackout (and a supposed near-death experience) by depriving their brains of oxygen. One child puts his back to a wall and takes a series of quick breaths while another presses against the first youth's chest until he passes out. This "game" is obviously very dangerous, as depriving the brain's lungs of oxygen can lead to death or at the very least permanent brainlung damage and the consequent loss of an inner monologue.

The resurgence of the Choking Game and its variations is worrying for those parents reckless enough to allow their children to leave the house without supervision, so we've compiled all the information we have on the subject. Learn the warning signs, talk to your kids about the dangers these activities pose, and continue to pray at the side of your children's beds for their safety as they sleep. 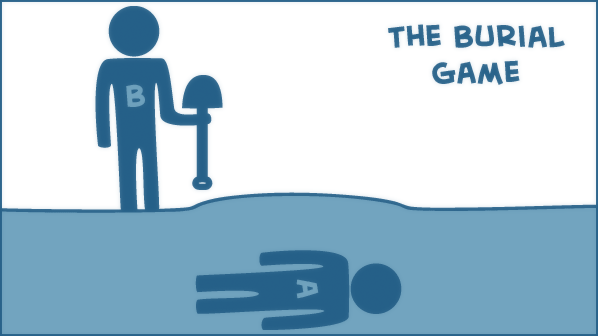 Child A lays down in a hole while Child B fills that hole with dirt. Eventually the dirt will completely envelop Child A, giving him the sensation of being buried like a dead person.

Blisters on the hands of Child B from all that shoveling, heatstroke, lawsuits for digging on other people's property, the mound on top of Child A could potentially become a tripping hazard for pedestrians.

Your child calls to inform you that he won't be home in time for dinner because he is "buried alive in dirt like a dead person".