The Chronicles of Jasper (ACT II)

“He who fights with monsters might take care lest he thereby become a monster. And if you gaze for long into an abyss, the abyss gazes also into you.” -Friedrich Nietzsche

My loathing knows no bounds. I am alone in this sea of idiocy, grasping for some meaning when there is nothing. My fellow humans are primates: consuming, shitting, fucking, and spending $100 on jeans at Diesel stores. How can one stay pure when they are surrounded by such filth? I try to encapsulate myself in a protective bubble in my apartment and ice cream truck, away from the hoary masses trying to infect me with their mediocrity and stupidity, but I can feel myself slipping. Their claws are digging into my flesh and dragging me down into the this feasting pit of greed and ignorance. My only reprieve, my salvation, is the jingle-jangle of the soothing ice cream truck music, a sound that brings temporary joy to the fat children that waddle out to greet my truck with their monetary offerings before fleeing back inside the darkness next to the cancerous glow of the television set. Without my ice cream job, I think I would be totally insane and spend my days giving clues about my crimes to the police over the phone in the form of sinister riddles.

Even though the human race as a whole is doomed, things have been going well for me personally as of late. Last week, I was finally recognized for my 25 years of service working at Chilly-Tyme ice cream, and was promoted by the board of ice cream to Admiral of the 3rd fleet. The 3rd fleet consists of my ice cream truck so that really doesn’t change, but I was allowed to hire one squire to assist me in my ice cream endeavors. Another hand was badly needed since my parking brake is out and it became increasingly difficult to serve my small patrons while moving at 5 mph. With my assistant with his foot firmly on the brake, I would have time to work the crowd at my leisure, and not worry about the children’s little legs getting pinned under my wheels again.

I am a firm believer of equal opportunity of all genders, races, creeds, except when it comes to those bothersome Negroes. I wanted to give a poor, mentally challenged soul who needs self-esteem a chance to earn it with the responsibility that comes with being an ice cream employee. Also, I wouldn't have to pay him as much and I could make him clean my apartment as well. I think it’s good for him to get out and keep working so that he doesn’t get in any monkeyshine, like that Frankenstein fellow. His name is Fitzgerald and although he had a slight drool problem, I was happy to have him on board the 3rd fleet as my first mate. 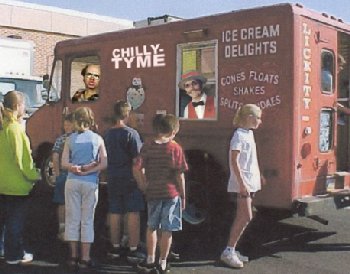 Any child that projects sass or any attitude walks home empty handed! That's what we call tough love.

Fitzgerald is not without his faults. He is a terrible driver and has already demolished over a dozen mailboxes on our route. But I am careful not to correct or rebuke him, so as not to harm his self-esteem. The only time my patience ran out with lil’ Fitz was when I caught him stealing some ice cream while on duty. Such a transgression would be dealt a severe flogging or even death in the old days of ice cream service. My rage was uncontrollable and I took my shoe off and began smiting Fitzgerald harshly about the face and arms. He let out screams that sounded like a high-pitched bark, and all the children who were waiting for ice cream ran away crying. To make matters worse, Fitzgerald’s case worker was coming to visit him and I only had a few hours to try to cover up the damage I had done with my shoe. I called my sister-in-law who is a beautician and she went to work covering his black bruises with her masking makeup. When the case worker showed up, she looked suspiciously at the patchwork on Fitzgerald we had just finished, and asked me why he was crying. I distracted her with some of my famous mint chip ice cream, and she left with no more questions. It was a close call.

I let Fitzgerald sleep on my couch and we settled down nicely together in my apartment. It had been so long since I’d had any company over that I had to keep reminding myself to not walk around in the nude while singing show tunes. Normally I would spend my evenings watching old game shows from the 70's, making prominent political figures out of Play-Doh, and plotting the demise of the people who populate my enemies list. But now that Fitzgerald is here, I can do all sorts of things like play Axis and Allies, Twister, and even start a fight club in the boiler room. The loneliness that had been pervading my life and slowly suffocating me was now lifting, and I could breathe freely again. It was nice to have a friend. 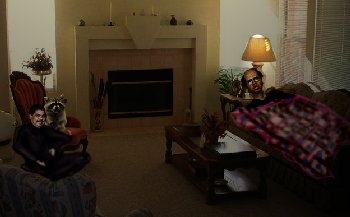 The raccoon and Indian screen legend, Punjab, won't let Fitzgerald have a romantic moment alone by himself.

Alas this period of happiness was just a facade, for underneath the surface something sinister was afoot. I believe that sometime last week, probably from one of the many holes in the roof, a raccoon has invaded the apartment. I can hear him at night. He plots, waiting to strike while I am at my weakest: soaping my horrid, naked body in the tub. I have searched the premises several times but cannot find this furry intruder. Fitzgerald has been having night terrors as well. He tells me that at night the raccoon watches him from across the room as he pleases himself. I told him that he is allowed to please himself once a week as long as he lights a candle so I know not to walk in the room and he cleans up properly afterwards. The raccoon watches Fitzgerald awkwardly fumble underneath the sheets until he climaxes, letting out a bray not unlike that of a mountain ram. This usually scares off the raccoon and it goes into hiding once again. Fitzgerald also says that Punjab, a popular actor on a Bombay soap opera we watch, joins the raccoon to spy on him. While I would like to believe the talented Punjab would grace our abode with his presence, I am apt to think this is just Fitzgerald’s overactive imagination.

As for my dreams, I had the same dream I always have last night, although something was amiss. Like normal, I rode through the decaying world on my magnificent unicorn, Sebastian, smiting sinners with my flaming sword as I headed to the City of Elders to take part in the final battle for the salvation of mankind’s soul. But when I arrived to stand tall next to my angel brethren to fight the demons in the sky, they took me aside and said they had something important to tell me. Apparently, some charts in heaven were mixed up and I was in the wrong place. They said that I was really on the evil side and all the sins of my mortal life had excluded me from fighting on the righteous side of the conflict. Before I could protest my case or ask to see baby Jesus, they cast me down into the hellfire with all the other sinners and Native Americans. I had been forsaken once again, betrayed by the creator because of a filing snafu. Instead of sitting on a smoldering rubbish heap and crying, I took up my sword and swore to the Dark Lord that I would give my life destroying all that is good and pure in this world. I was made a general in the dark army, and marched on in the City of Elders, slaying all in my path. For once in my life I was important and powerful, no longer a mere lackey, following the great shepherd like a mindless sheep. They would pay for what they did to me. They would all pay.

When I woke up, my sheets were covered in the same sweet syrupy liquid once again, but instead of tears on my face, I had a beaming smile. Things would be different from now on. The new Jasper had arrived.